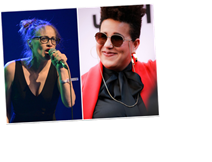 Who run the world the Best Rock Performance category at the 2021 Grammy Awards? Girls.

The nominations for the upcoming 63rd annual Grammy Awards were announced on Tuesday, with some artists making history with their sheer volume of nominations (Beyonce racked up a whopping nine) and others by dominating a category.

For the first time in the awards show’s history, all of the artists nominated in the Best Rock Performance category are either women or a woman-led group.

The nominees this year include Fiona Apple for “Shameika,” Haim for “The Steps,” Brittany Howard for “Stay High,” Phoebe Bridgers for “Kyoto,” Grace Potter for “Daylight,” and Big Thief for “Not.” (Big Thief is notably led by Adrianne Lenker.)

The category — which is an amalgam of previous categories such as Best Solo Rock Vocal Performance, Best Rock Performance by a Duo or Group with Vocal, and Best Rock Instrumental Performance — has only been around since 2012 and has never been won by a solo female artist.