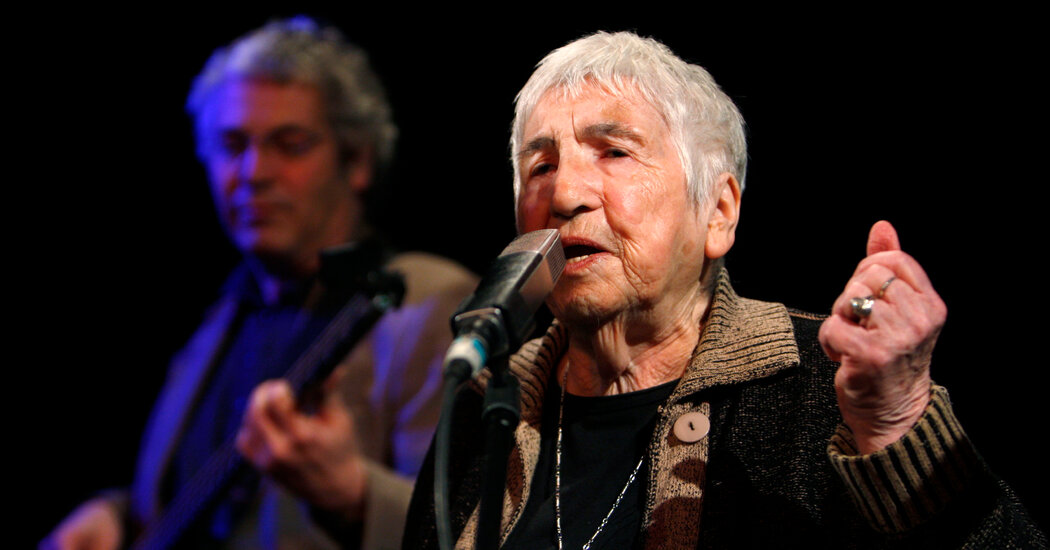 When Esther Bejarano was 18, she played accordion in the women’s orchestra at Auschwitz, which played marches as prisoners left the concentration camp for hard labor and upbeat music as train loads of Jews and others arrived.

“They must have thought, ‘Where music is playing, things can’t be that bad,’” she told The New York Times in 2014, recalling how some detainees smiled and waved at the musicians. “They didn’t know where they were going. But we knew. We played with tears in our eyes.”

Mrs. Bejarano died on Saturday at a hospital in Hamburg, Germany. She was 96. With her death, Anita Lasker-Wallfisch, a cellist, is believed to be the only member of the orchestra still alive.

Mrs. Bejarano’s death was announced by the International Auschwitz Committee, which was founded by survivors of the death camp and to which she belonged, serving as a powerful voice against intolerance in her later years.

She would also form a band with her children to sing antiwar and Jewish resistance songs and, in her 80s, joined a hip-hop group that spread an antifascist message.

Being in an orchestra at a concentration camp was often an escape from forced labor, and possibly from death. For Mrs. Bejarano, playing music for her captors relieved her of having to carry heavy rocks and earned her decent medical treatment during two illnesses.

When Mrs. Bejarano learned that a women’s orchestra was being formed at the Auschwitz II-Birkenau camp, she approached its conductor, Zofia Czajkowska, a Polish music teacher.

She played the piano, but there wasn’t one at the camp at the time. When Ms. Czajkowska asked if she could play the accordion, she said she could, although she never had. Yet she passed her audition, playing a German song, “Du hast Glück bei den Frauen, Bel Ami” (“You’re Lucky With Women, Bel Ami”).

“At the time it was a very well-known hit,” Mrs. Bejarano said in an interview cited in “Auschwitz Studies No. 27,” published in 2014 by the Auschwitz Memorial State Museum. “I didn’t have any problems with my right hand, because I knew how to play the piano and immediately found the keyboard, but the bass is on the left, and only thanks to the fact that I have a good ear could I find the right tones. I managed.”

Orchestras were formed in many concentration camps — to entertain the Nazis, but also to serve other purposes.

“They were for the benefit of the administration and staff,” said Bret Werb, the musicologist and recorded sound curator at the United States Holocaust Memorial Museum in Washington. “They believed that quick march music would get the prisoners to march in time, and quickly, to hard labor.”

Mrs. Bejarano, who arrived at Auschwitz in April 1943, performed at the camp for several months until being moved later that year to the Ravensbrück concentration camp in northern Germany. On a death march from the camp near the end of the war, she and several other prisoners escaped.

She celebrated the Allied victory over the Nazis in a market square in Lubz, Germany. A picture of Hitler was set on fire by American soldiers. A G.I. handed her an accordion, which she played as soldiers and other camp survivors danced.

“That was my liberation, an incredibly great liberation,” she told Der Spiegel last year. “The American and Russian soldiers embraced and shouted, ‘Hitler is dead.’”

She found her way to a displaced persons camp at Bergen-Belsen, near a former concentration camp, where she learned that the Nazis had killed her parents in Riga, Latvia. Her sister Ruth, who had fled to Switzerland, was deported and sent to Auschwitz before Esther’s arrival.

“That is so fateful,” Mrs. Bejarano told the British newspaper The Telegraph in an interview. “I came to Auschwitz in April 1943, and if she had lived, I would have met her there.”

From Bergen-Belsen, Mrs. Bejarano hitchhiked to Frankfurt and took a train to Marseille, France, where in August 1945 she boarded a boat to what was then British Palestine and was reunited with her sister Tosca. Their brother, Gerhard, had immigrated to the United States some years earlier.

Esther Loewy was born on Dec. 15, 1924, in Saarlouis, in southwestern Germany, near the French border. Her father, Rudolf, was a teacher and cantor. He met her mother, Margarethe, in Berlin when they were teenagers; he was her piano teacher, and the two fell in love.

Ms. Bejarano described her childhood as “lighthearted,” but that part of her life ended when she was sent at 16 to a Nazi work camp near Berlin, from which she would be sent to Auschwitz.

After the war, she restarted her life in what would become Israel. She studied singing, joined a choir, gave music lessons and in 1950 married Nissim Bejarano, a truck driver, with whom she had two children, Joram, a son, and Edna, a daughter. In 1960, she returned to Germany, settling in Hamburg, and ran a laundry service with her husband.

She is survived by her children, two grandsons and four great-grandchildren.

She found it difficult to discuss the Holocaust with anyone until the 1970s, when she watched German police officers shield right-wing extremists against protesters. The incident turned her into an activist, and she joined the Association of the Persecutees of the Nazi Regime. She began to tell her story in schools, delivered protest speeches and sang with Coincidence, the band that she formed with her children in 1989.

“I use music to act against fascism,” she told The Times. “Music is everything to me.”

Around 2009, when she was in her 80s, Mrs. Bejarano’s musical career took an unexpected turn. She was asked to join Microphone Mafia, a German hip-hop group, with whom she continued to spread her message against fascism and intolerance to young audiences in Germany and abroad, from Istanbul to Vancouver.

Onstage with the group’s Kutlu Yurtseven and Rossi Pennino, Mrs. Bejarano was an unusual figure: a tiny woman with a snow-white pixie haircut, singing in Yiddish, Hebrew and Italian.

Hip-hop was not her preferred musical genre. She joked that she persuaded her bandmates to lower their volume and stop jumping around onstage so much. She believed that hip-hop’s influence on young people could help her counter a rise in intolerance.

“Twelve years together and almost 900 concerts together, and all this thanks to your strength,” Microphone Mafia wrote on its website after Mrs. Bejarano’s death. “Your laughter, your courage, your determination, your loving manner, your understanding, your fighting heart.”

Mrs. Bejarano, a recipient of Germany’s Order of Merit, issued a statement this year through the International Auschwitz Committee calling for Germany to declare May 8 a federal holiday to commemorate the end of World War II in Europe.

“And if you are concerned about whether Germans should celebrate this day solemnly,” she wrote, “imagine: What would the world look like if the Nazis had won?”