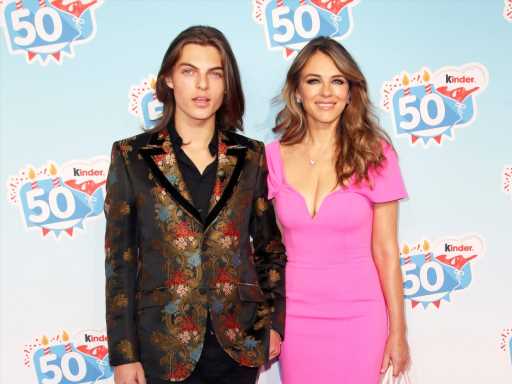 Elizabeth Hurley is always sharing her favorite bikini snapshots on her Instagram page, but she posted a rare photo with 20-year-old son Damian Hurley on Monday that got her followers excited. The mother-son duo posed in their Versace best for some glam images.

Wearing a sparkling pink mini dress from the high-fashion designer, Elizabeth showed off her fit figure as the sheer cutouts of the silhouette hugged her gorgeous curves. The gold detailing made it seem like it was holding the dress together in a very cheeky way — it’s a look that the 57-year-old actress pulls off flawlessly. Damian joined in on the fun in the second photo with an all-black suit with no shirt underneath. The statement piece on his couture outfit was a diagonal strap with a gold buckle that tied the look together. His chiseled good looks and stunning blue eyes make him his mother’s mini-me. Elizabeth wrote a very stylish caption, “Having a @versace moment.”

The Father Christmas Is Back star has a long history with Versace after stepping out on the red carpet in the safety-pin dress at then-boyfriend Hugh Grant’s movie premiere. The fashion history moment was a pure accident because no one would lend Elizabeth a dress at the time. “I urgently needed to find a dress to wear for Hugh’s premiere, and in those days, I had no idea about fashion,” she told Harper’s Bazaar in 2019. “I remember going to an office where they literally fished a dress out of a white plastic bag. I took it home and did my own hair and makeup, fighting Hugh for the mirror, which wasn’t even full-length, in our tiny one-bedroom flat. It was all very unglamorous compared to how things get done these days.”

That was the start of a beautiful designer relationship and Donatella Versace explained exactly why her late brother Gianni Versace created it in the first place. “Gianni made that dress for a woman who is sure of herself and who isn’t afraid to break the rules. Liz embodied all of this in an extraordinary way,” she explained. It looks like Elizabeth is still achieving that Versace look even 28 years later.