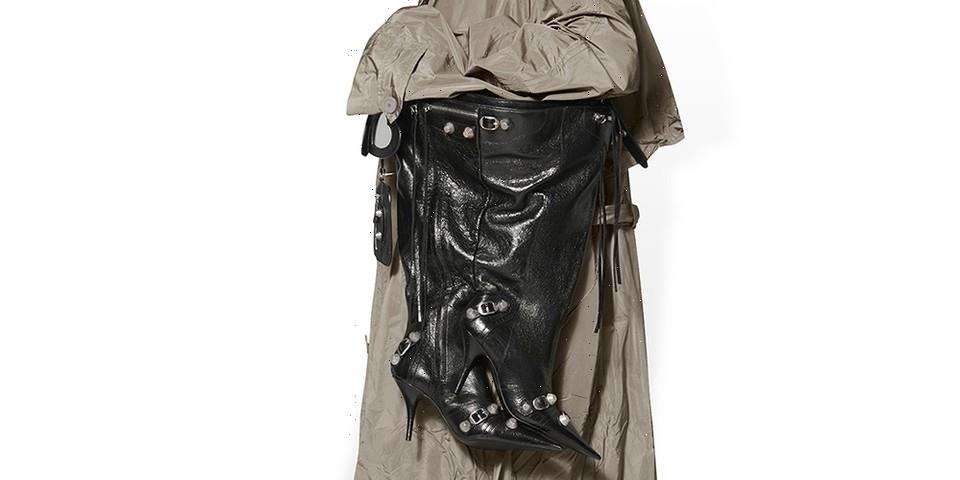 Is it a bag? Is it a pair of boots? No, it’s Balenciaga‘s Le Cagole Boot Bag, a wild take on the Le Cagole boots that have become a staple in any Y2K lover’s rotation that now sees them transformed into a daily carry.

Unpacking the bag, it seems that Demna is harking back to a divisive era of Balenciaga. Nicolas Ghèsquiere launched the Motorcycle bag in 2001, a piece that became a hit with it girls like Kate Moss, Kim Kardashian, Nicole Richie and Paris Hilton to name a few, and its slouchy unconstructed aesthetic has gone on to inspire Demna with boots and bags that play on the grungey undertones of this bag. Today’s Le Cagole has starred in Kim Kardashian’s selfie-centric Balenciaga campaign and has been worn by the media personality on multiple occasions, as well as by her gang of sisters and the likes of Julia Fox, Christine Quinn and more.

Now, the boots and bag come together as one. As seen during Balenciaga’s Winter 2022 show, the “360° Collection,” the daring piece appears in black or “Fluo Yellow” colorways to once more nod to early 2000s trends. It’s made from the same luxuriously soft lambskin leather as the old Motorcycle bag and other Le Cagole boots, a material that lends itself to being tossed around like one of Jane Birkin’s defaced bags.

The bag also comes with quintessential accessories like the love heart-shaped mirror, a zipper pouch, and aged hardware that works itself on the bag and the shoe section to further define the hybrid accessory. Adding to this, Balenciaga completes the look by keeping the shoe’s heel in tact on the bag.

Balenciaga’s Le Cagole Boot Bag retails for $3,250 USD and can be pre-ordered now.