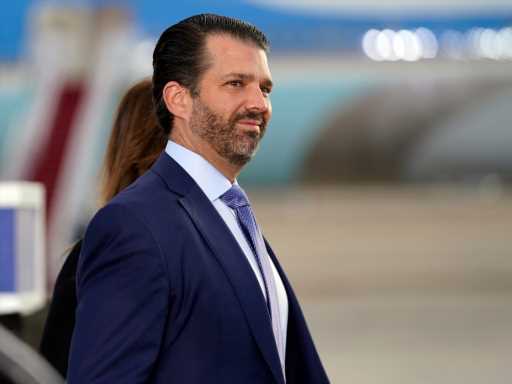 Donald Trump Jr. had some strong feelings after President Joe Biden’s Thursday remarks on the Kabul airport bombing in Afghanistan, and his comments are evoking more sympathy than he’d probably hoped. Biden spoke at the White House on Thursday evening in wake of the news that explosions at Hamid Karzai International Airport had killed at least 13 U.S. service members and 90 Afghans, and the President did not maintain the kind of stoicism Trump Jr. had apparently hoped for in wake of the news, opting instead to be open in his grief for the lives lost and referencing his own late son Beau Biden’s service in Iraq as a reminder of how indelibly he feels the pain of military families grieving this loss. “We are outraged as well as heartbroken,” Biden said from the East Room. From wherever he was watching, Trump Jr. tweeted out a photo of the President hunched over, visibly distressed: “This is what weakness looks like.”

In his remarks, Biden acknowledged the grief of the moment while vowing retribution for the lives lost. “To those who carried out this attack, as well as anyone who wishes America harm, know this: We will not forgive,” he said. “We will not forget. We will hunt you down and make you pay.”

But Biden’s comment still were evidently not macho enough for Trump Jr., who also mocked Congressman Adam Schiff and Metropolitan police officer Michael Fanone for their emotional testimonies in July on their experiences of the Jan. 6 Capitol riots. Trump Jr. retweeted two videos of the men sharing their stories and becoming visibly upset, one captioned “Rep. @AdamSchiff pretends to cry during 1/6 hearing” and the other “Wonder how many times he practiced this.”

Like Trump Jr.’s comments this week, Cardillo’s comments were met with swift backlash lamenting the inability of these two and their supporters to recognize the value in adult men openly expressing their emotions and allowing themselves to be vulnerable — a trait many commenters attributed to Cardillo and Trump Jr.’s own fathers not having set a good enough example for their sons.

In the wake of this week’s events, we don’t mind seeing a President who tells us it’s okay to grieve. With five kids of his own, Trump Jr. may want to consider carefully the message he’s sending about who is and isn’t allowed to be human.