The Happiest Place on Earth is about to get a lot more green.

The Walt Disney Company on Thursday marked Earth Day by unveiling a revamped list of renewable energy efforts aimed at reducing the carbon footprint of its theme parks and resorts around the world.

By far the most extensive will be the addition of two separate solar plants, built in conjunction with local utility partners, at Walt Disney World in Florida. Both are expected to open in two years.

The two new plants will operate in conjunction with a 270-acre solar facility, which opened in 2019, and a solar farm built in the shape of Mickey Mouse, unveiled in 2016. Collectively, the facilities will reportedly produce renewable energy equivalent to about 40% of the total power consumption across its four theme parks, resort hotels and water parks. 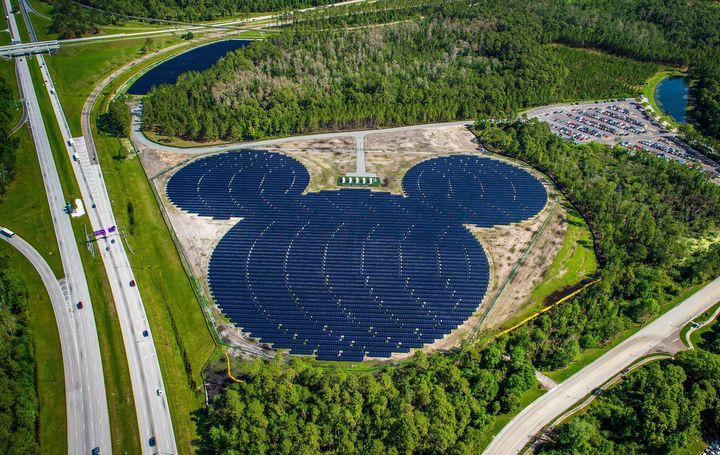 “Through the innovative use of space, and with a touch of Disney magic, we are using the sun to conserve energy and power up in a responsible manner,” Mark Penning, Disney’s vice president for Animals, Science and Environment at its theme parks division, wrote in a blog post. “Our new set of ambitious goals commit us to achieve net zero emissions for our direct operations by 2030.”

Across the country, the top of the Radiator Springs Racers attraction is lined with 1,400 solar panels at Disney’s California Adventure, located adjacent to the original Disneyland in Anaheim, California. A series of solar canopies are also in place at Disneyland Paris, Tokyo Disneyland and Shanghai Disneyland.

Catch a short video about Disney’s renewable energy plans below.

The energy produced by Disney’s global solar portfolio is reportedly enough to power 65,200 homes for one year, or the equivalent of eight Magic Kingdom parks.

The plans follow a challenging time for Disney’s theme parks, which are on a slow rebound after being devastated by the COVID-19 crisis.

Walt Disney World began a phased reopening in July 2020 following a four-month closure, though total attendance reportedly fell short of expectations for the rest of the year. Disneyland is set to reopen April 30 after being closed for more than 13 months, though only California residents will be permitted to visit until further notice.