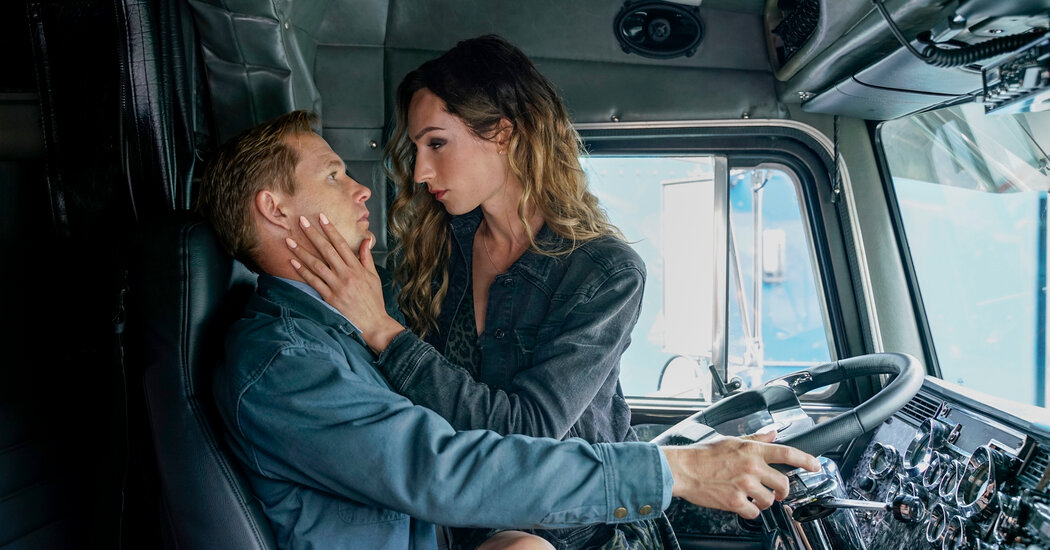 David E. Kelley has been around long enough to know that his current hot streak could go cold any day now.

“Some shows stick, and some shows don’t,” he said last week. “There have been a couple of stickers of late.”

The prolific television producer first established himself in the 1980s as a master of courtroom drama and bizarre twists on “L.A. Law” — remember the famous elevator shaft scene? — before riding a second wave of TV hits in the 1990s. In 1999, he became the only showrunner to win Emmys for best comedy (“Ally McBeal”) and best drama (“The Practice”) in the same year.

But after a string of flops on network television (“Snoops,” “Girls Club”), Kelley switched over to streaming and cable. Mostly drifting away from the law-firm dramas with which he first made his mark — though “Goliath,” on Amazon, followed a rogue lawyer played by Billy Bob Thornton — he started adapting novels. This opened a new vein of hits with prestige psychological thrillers such as HBO’s “Big Little Lies” and “The Undoing,” both murder mysteries starring Nicole Kidman that wallow in the scandalous lives of coastal elites.

Now he’s back on network with “Big Sky,” a 10-episode series premiering Tuesday on ABC. While it, too, is a murder mystery, the show otherwise seems a little outside Kelley’s usual jurisdiction, at least on the surface. Based on a series of four books by C.J. Box, the story is set in Montana (the show is shot in Vancouver) and centers on small-town, working-class people. One such person is a long-haul truck driver named Ronald Pergram (played by Brian Geraghty), who thinks of himself as a hero but is actually a predator who tasers and kidnaps female and gender-fluid characters. An ex-rodeo rider turned rookie private investigator named Cassie Dewell (Kylie Bunbury) is in pursuit.

“There was something delicious about this young de facto law enforcement officer in the Wild West,” Kelley said. “In a world where resources are thin and calls for help are often not answered, she’s out there on her own, to a certain extent, fighting the bad guys.” (And the good guys, too, at times — it’s complicated.) 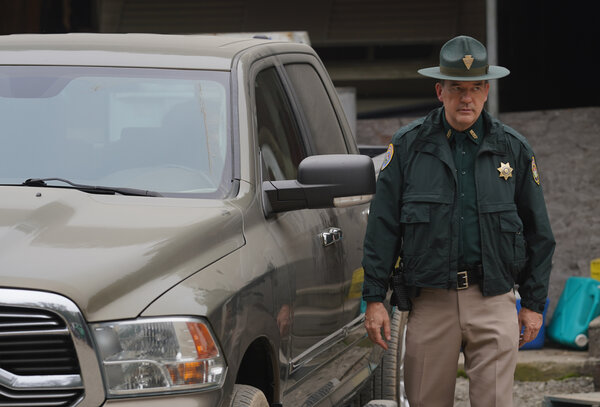 Kelley has been both praised and criticized for his depictions of women, the criticisms aimed primarily at the flighty, neurotic characters like Ally McBeal, as well as at the various vixens and sexy sidekicks who have populated his shows. With “Big Sky,” Kelley is bringing darker cable and streaming sensibilities to broadcast television (including some of his trademark twists and heavy themes, like sex trafficking), but it won’t be a steady onslaught of violence against defenseless women. “This is not a damsels-in-distress series,” he promised.

In a phone interview, Kelley talked about adapting “Big Sky” and “The Undoing,” which concludes its six-episode run on Nov. 29, and the connections between the two shows. These are edited excerpts from the conversation, which include mild spoilers for “The Undoing” if you’re still catching up.

“Big Sky” isn’t your usual sort of story, or your usual kind of milieu. What made you want to adapt these books, especially since you’ve said before that you didn’t want to do serial killer shows?

You’re right. I thought “Dexter” was brilliant. And I loved “The Sopranos” — Tony Soprano killed people. If it’s a series where you’re going to be spending a long time with these people, they can become very real in your head. To live in that world with those people, it helps for our own survival to like them, if not love them. And I never saw myself as a person who could live inside the head of that kind of depravity.

If you look at the evolution or metamorphosis of Ronald Pergram, I think he’s probably a bit more vulnerable in the television version. He was riveting in the book, scary even, but I think we unearthed a little more of his humanity. He’s not all evil. If we’re successful, the audience will be both afraid of Ronald but also feel for him. And John Carroll Lynch is so good at channeling State Trooper Rick Legarski that it’s both amusing and horrifying at the same time.

You burn through nearly half of the first Cassie Dewell book, “The Highway,” in the first episode. What’s the pacing of this show going to be like?

We’ll probably go through two books in the first season, with the second story line involving another kind of high-octane cat-and-mouse chase with Cassie and a drug cartel. Then we’ll move on to the third book. And then we’ll send C.J. Box smoothies so he can keep writing more books! [Laughs.] Although knowing C.J., he’d probably prefer a good strong cup of coffee and then a day on the river where he can recharge. We’ll go through C.J.’s books as he writes them, and we’ll probably go beyond that, too, just because series television is the beast that eats script after script after script, and you’ve got to keep feeding that beast.

We’re expanding C.J.’s world, and ultimately, what I think will make the series distinctive is that we’ll use these high-octane cases to unearth the very human vulnerabilities and fragile complexities of our characters.

You address the current pandemic in “Big Sky,” but we see no one wearing a mask. Why? Did you worry about what message that might send?

That’s a tricky question, and it has nothing to do with politics. I’m a mask wearer myself, and I would happily have characters wear masks. But we’re mindful of the fact that when people turn on a show at 10 o’clock at night, their main mission is to be entertained, not educated, schooled or lectured. People are looking for a little bit of escape from the bad news.

So we acknowledge that we’re living in pandemic times, but we’re not delving into it in a real way because if we were, then you would never see the actors’ faces, and we pay a lot of money for those faces. Fortuitously, it is a show that is outside most of the time, in big wide-open spaces. I didn’t have to scratch my head and think, “How are we going to shoot this during Covid?”

“The Highway” starts off with a betrayal. Without giving too much away, you changed the nature of that betrayal in “Big Sky” so that our introduction to your two female leads ends up with them caught up in a physical altercation. Were you ever worried that this might seem like a catfight?

I was. In fact, one of the tone notes for that fight is that it shouldn’t be like there are two women fighting over a man. It was described on the page like they’re two hockey players who dropped their gloves and are just looking to assert dominion. It’s two strong women not backing down from each other. I hope it comes across on the screen that even if the men thump their chests more, the women in Montana are tougher than the men. In Episode 3, Ronald says, “We kidnapped the wrong teenagers,” and boy, did they, because these young girls, Grace [Jade Pettyjohn] and Danielle [Natalie Alyn Lind], they’re tough. There is a certain ferocity to all of the women.

Does Grace (Nicole Kidman) on “The Undoing” share that ferocity? So far, it’s hard to tell.

She is definitely ferocious, too, but she’s a victim of her own ferocity as well. Her perseverance and power to cling to a narrative or a version of the world is pretty unflinching. It’s not necessarily a good thing.

Both “Big Sky” and “The Undoing” are female-centric thrillers, with male sociopaths who bring chaos into the women’s lives and love triangles with married men that are resolved, intentionally or not, by murder.

I don’t think I was drawn to that recipe. [Laughs.] But who knows! We’re the last people to understand ourselves. But I take your point, and I’ll write about something different for the next one.

For me, it started with loving both books and then going, “What if this could be translated to the screen?” With “Big Sky,” we’re sticking more closely to the architecture of the book series. For “The Undoing,” I kept wondering, “What if the character of Jonathan came back?” That question started haunting me, and that was my springboard for an adaptation where we do deviate from the book. [The director] Susanne Bier and I both loved the part of the book where Grace was rebuilding herself after her world fell apart. But for the purposes of this run, it was more about the thriller aspect. Who knows? If we did the extended life of Grace Fraser beyond this season of “The Undoing,” maybe we’d get into that reconstruction part.

That could have potential, the way “Big Little Lies” started out as a limited series and then got a second season. And Susanne Bier has said you’ve been joking about doing a second season.

I don’t anticipate doing that; I think “The Undoing” is going to be a one-off. I wouldn’t do it without Susanne Bier, and she’s getting pretty busy now. But my point was that it wasn’t so much of a rejection of the second half of the book. We just concluded that for this limited series, the place where it would live and thrive best was in the psychological-suspense-whodunit-thriller genre.

At one point, Jonathan (Hugh Grant) seductively asks a showering Grace, “Would you like to be washed?,” a line that has captured people’s attention and imagination. You’ve said before that you often come up with dialogue while in the shower, did this scene originate there as well?

The shower is where it usually starts, and there is a science to that. There’s a default part of our brain which tends to be activated when we’re doing things that are completely unrelated to what we’re supposed to be concentrating on. So I’ve learned to surrender to that and reach for those ideas as well as the shampoo.

But that was not even my line. That was the vulgarity of Hugh Grant! And “Shall I get my rubber gloves?” was written by Hugh, too. He had a few choice ad-libs, and a lot of them made the cut. He’s a very clever man.

On Twitter, viewers have made cases for virtually every character on the show being the killer. Even Jean Hanff Korelitz, who wrote the novel the show is based on, wonders if you changed it from her version.

[Laughs.] And being old, I’ve forgotten it myself.