Fans accustomed to Corey O’Brien’s playful presence on TikTok and Instagram may be surprised to see the dancer strike a more introspective pose in a new short film.

O’Brien last week unveiled “Freedom,” which was produced in collaboration with the Los Angeles Centers for Alcohol and Drug Abuse. Directed by Brandon Hudson, the film shows O’Brien reflecting on his recovery journey in commemoration of National Recovery Month (September) as well as his ninth year of sobriety on Oct. 1.

“Filming ‘Freedom’ was a way for me to be vulnerable and reminisce on the past while being able to share my story of growth, which is important,” O’Brien, 30, told HuffPost. “I wanted to share my story in a way that was authentic to who I was and who I am now. … Creating art has not only been a passion of mine, but it’s been extremely therapeutic in my journey with sobriety.”

A Pennsylvania native, O’Brien exhibited a talent for the performing arts at an early age. His addictive tendencies, he said, became apparent shortly thereafter ― around the same time he began to grapple with his identity as a gay man. He started drinking at age 12, and by the time he turned 21, his family sought treatment for him through a 28-day rehab program that ended up lasting a full year.

As is the case for many people in the LGBTQ community, O’Brien saw substance abuse as “a way to escape who I was and the shame I felt, especially around my sexuality.”

“My peers rarely paid attention to me unless it was to remind me how ‘different’ I was,” he said. “For me, alcohol seemed like a way to silence those negative things, but instead they began to materialize in how I treated others and, ultimately, how I treated myself.”

These days, O’Brien is happy to reach for the barre instead of the bottle. He continues to showcase his fancy footwork on episodes of “RuPaul’s Drag Race” and alongside Mariah Carey and P. Diddy, among other stars. He’s also dating NFL free agent Ryan Russell, who came out as bisexual in 2019. 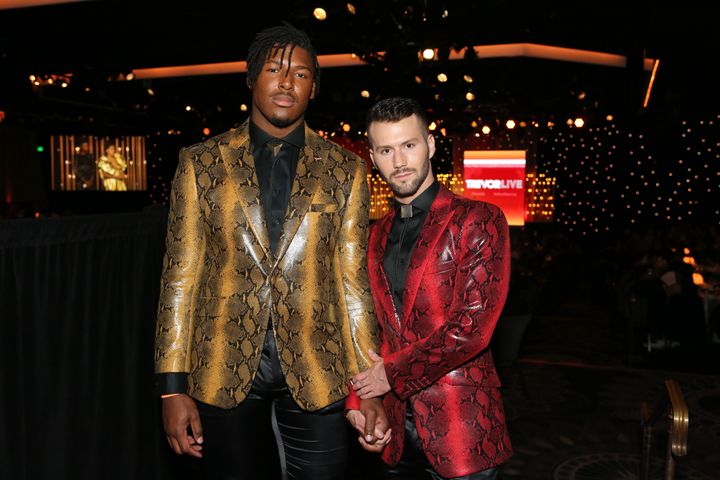 Together, the strikingly handsome couple takes fans behind the scenes of their romance via a TikTok video series.

O’Brien hopes that “Freedom” will help set the tone for his next project. Later this fall, he’ll relaunch his podcast, “Life According to Corey,” with a starry interview lineup.

The dancer hopes he and his guests will collectively share “deep-diving conversations and hilarious stories” as well as “speak openly and honestly about our past, present and future.”

“I’m focused on creating my own lane in the industry,” O’Brien said. “My mission is to inspire my listeners to live in their truth, fight for what they believe in and know insecurities are actually superpowers.”