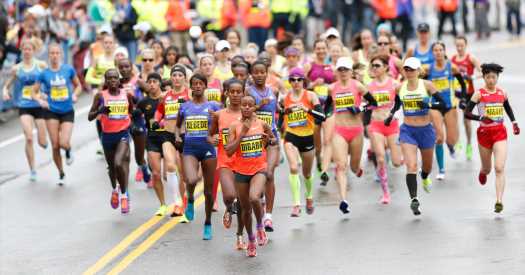 Could an infusion of bacteria from the guts of athletes help inactive people to exercise more easily?

A new study of marathoners, mice and their respective intestines toys with that possibility. It finds that strenuous endurance exercise by human athletes increases the numbers of certain bugs in their microbiomes and that giving those bacteria to mice allows them to run longer.

But the study’s results and implications also raise many questions, including how fully we understand the intricate, entwined effects of exercise on our insides and our insides on exercise and whether, even if we can commercialize and provide athletes’ intestinal flora to other people, we should.

In recent years, of course, scientists, physicians and many of the rest of us have become fascinated by the makeup and potential impact of the gazillions of germs living within us. Accumulating evidence suggests that the composition of these microbes, our microbiome, affects our physical and mental health, weight, risk for various diseases and longevity.

Extrapolating from that evidence, some researchers have tried transferring bacteria from people or animals with health traits, such as leanness, into those without, in hopes of also transferring the desired traits. But results have been mixed. Some experiments have found that obesity-prone mice can avoid gaining weight or lose fat after receiving microbes from lean donors, for example, but people in similar experiments may not.

Still, interest in the impact of the microbiome remains high, including the biomes of active people. Some intriguing recent research has shown that people who exercise regularly tend to have different bugs in their guts than sedentary people and these differences could play a role in the health benefits of exercise.

But which bugs from active people might be the most relevant for physical performance or health, why, and whether the same microbes might aid the inactive in various ways has not been clear. So, for the new study, which was published in Nature Medicine, a large group of researchers from Harvard University, the Joslin Diabetes Center and other institutions turned to feces from Boston Marathon runners.

They began, in fact, by gathering stool samples every day from 15 middle-of-the-pack racers, some male, some female, some meat eaters and some vegans, starting a week before the 2015 marathon and continuing for a week after. They also collected similar samples from 10 sedentary people.

Next, they looked at the composition of the microbes in the samples and found a striking difference. After the marathon, the runners’ guts teemed with far greater numbers of a bacteria called Veillonella. Their intestines had contained more of this microbe than the guts of sedentary people before the race, but afterward, the numbers soared. No other germ showed similar gains.

This change interested the scientists because Veillonella is one of the few microbes known to metabolize lactate as its preferred fuel. Lactate, a form of lactic acid, is created by working muscles and can cross into the blood and from there, into the gut. When microbes metabolize lactate, they break it down into several substances, including one called propionate, that can influence blood-sugar metabolism, oxygen consumption and inflammation, including in muscles. And scientists found genetic evidence now that the increase in Veillonella in runners after the marathon was pumping up the production of propionate in their guts.

So, could it be, the scientists wondered, that the extra Veillonella and propionate prompted by the strenuous exercise might create an environment inside runners that would enable them to run better and longer, thanks to improved fuel metabolism and lower inflammation? To delve into that question, the scientists, in the final part of the study, infused mice with Veillonella from one of the runners or a placebo and, separately, with propionate or a placebo and had them all run. The animals that received either the bacteria or propionate ran significantly longer than the other mice before tiring.

Given these findings, the researchers “are optimistic” that athletes and inactive people might likewise benefit from popping a little supplemental Veillonella, says Aleksandar Kostic, an assistant professor of microbiology at Harvard Medical School and the Joslin Diabetes Center and the study’s senior author. He, like several of his co-authors, has equity in a new company that plans to offer such supplements. (The current study was funded by the Wyss Institute for Biologically Inspired Engineering at Harvard and the National Institutes of Health, with no contributions from the new company.)

“What excites me is the idea that this might help people who find exercise difficult to increase their exercise capacity,” Dr. Kostic says, while also potentially improving the performance of already-fit athletes

But so many questions remain unanswered. Primary among them is whether the preliminary results from mice can be replicated in people and whether the guts of people who are not runners will respond like those of athletes; Veillonella might work differently in the bodies of sedentary people, for example, or simply die out once it is in the gut. People also may not understand that the supplement, as currently imagined by the scientists, is meant to prop up and not replace exercise. Finally, the researchers did not look into whether levels of lactate actually increased in runners following their race or whether racers’ baseline levels of Veillonella were associated with faster or slower finishing times, so much remains to be learned about how the bacteria functions.