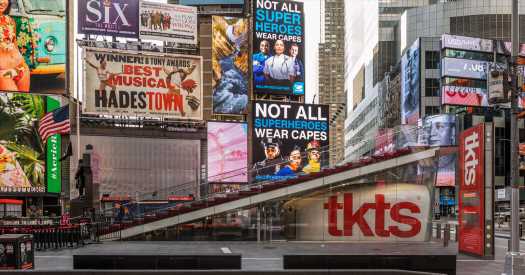 As New York’s theaters prepare to reopen following the twin crises of a pandemic and rising discontent over racial inequity, a new study which found that both power and money in the theater world have been disproportionately controlled by white people is calling for “a fundamental paradigm shift.”

The study offers a direct challenge, not only to theater leaders, but also to those who fund the institutions, saying, “it remains to be seen whether or not the multitude of antiracist solidarity statements and pledges to diversity will result in real action and systemic change.”

“Our expanded leadership stats confirm that almost every gatekeeper, employer and decision maker in the NYC theater industry is white,” the coalition declares in a letter introducing the study.

They examined the 2018-19 New York theater season — the last full season before the pandemic — looking at every Broadway show, as well as the work of the nonprofits.

The coalition called particular attention to a dearth of shows about Asian Americans. “Even as the industry has made small gains in diversity in recent years, particularly at the nonprofits, our work at AAPAC has shown that Asian-focused narratives remain consistently minimized and overlooked,” the report says.

Among the other findings:

Using publicly available tax forms, the coalition calculated the public and private contributions to nonprofit theaters, and said that $150 million went to the 18 big nonprofits in the city that it referred to as “predominantly white institutions,” compared with $12.6 million to 28 theaters of color.

At the theaters studied, 59 percent of roles went to white actors, compared to 29 percent for Black actors, 6 percent for Asian American actors and 5 percent for Latinos (the coalition uses the gender-neutral term Latinx).

The report gave grades to individual theaters, and declared the Public Theater to be the most diverse, and the Irish Repertory Theater to be least diverse.

The intense focus nationally on diversity issues has prompted an increase in research about race, gender and disability within the theater industry. A coalition of groups doing such research, called Counting Together, formed in 2019, and this month introduced the CountingTogether.org website, hosted by the Dramatists Guild and the American Theater Wing, to make the research more readily available.