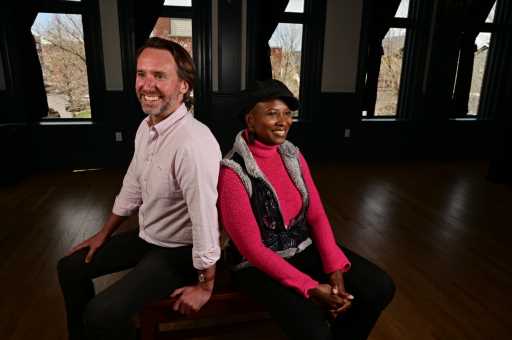 When Local Theater Company launches the 11th installment of its Spring Lab this weekend at Boulder’s Dairy Arts Center, the three-day festival of staged readings of new works, conversations and parties will signal a return to business as usual. The company’s signature event will be in-person, finally!

It also will serve as an exciting reminder that there is no such thing as “business as usual” in innovative theater-making. Change is welcome – and since the start of the pandemic and the social justice protests of 2020, it has been essential.

Among the changes at Local Theater has been the smooth but telling ascent of Nick Chase and Betty Hart over the past year, to their roles as co-directors of Local Lab, which now has year-round programming. The associate artistic director and marketing manager of the company, Chase is also a playwright and director. Hart, in addition to being a Local Theater associate artist, is an in-demand director and president of the Colorado Theatre Guild. When Local Lab 11 unfurls this weekend with its four main-stage readings, it will have been guided as much by them as by the company’s founder and artistic director, Pesha Rudnick.

In 2020, Local was among the handful of area theaters that leaned into the abyss created by the coronavirus and offered something to communities in need of the engagement and succor of theater. Others included the Catamounts; the dance performance company Control Group; and Buntport, the little troupe of brainiacs that thinks it can and does and does and does. Under Rudnick’s stewardship, Local Theater, its associate artists and board also grappled with the meaning of the social justice protests for the work they did and how they did it, and of who exactly “they” were.

“Pesha didn’t have to choose us. But she intentionally did choose Nick and me. And I think what’s great is that we both represent the cool factor. Because we’re just really cool theater peeps with interesting aesthetics,” Hart said with a knowing smile during a tag-team interview with Chase. “But also, that you get both the BIPOC and the LGBTQ community between the two of us. We both have an East Coast thing. We both have a West Coast thing. It’s just really interesting.”

It’s been nearly two years since an anonymous group of theater-makers served notice to America’s theater community — Broadway and independent — that theater must do better.

“Dear White American Theater: We come together as Black, Indigenous and People of Color (BIPOC) theater-makers, in the legacy of August Wilson’s ‘The Ground On Which I Stand,’ to let you know exactly which ground we stand on in wake of our nation’s civic unrest. We see you. We have always seen you. We have seen you pretend not to see us.”

So began the watershed document “We See You, White American Theatre,” which was made public in June 2020. The authors were anonymous, but the initial 300-plus who co-signed the letter are among the nation’s best and brightest theater-makers, such as Lin-Manuel Miranda, Lynn Nottage, Viola Davis, Quiara Alegría Hudes, Suzan-Lori Park and Dominique Morrisseau.

The document currently has more than 104,000 signatures.

One didn’t have to embrace every demand to recognize in its principles for building anti-racist theater real opportunities for transformation. Which, in the arts, means new stories, more storytellers, new forms and reimagined leadership.

“I think what the document provided for all of us in the theater community — especially those of us who had equity, diversity, inclusion as core tenets already at play in our strategic plans, in the way that we run our companies — was some new language that was in the voice of our BIPOC leaders in theater,” said Rudnick. “It wasn’t within sort of this vague community. It was very specific. The principals gave us some language to serve as a barometer for our work.”

Institutions, even independent ones, have a way of returning to form, out of habit even more than mendacity. For many years, Rudnick already had been honing a guiding principle. “If I just boiled it down to one theme, it has usually been ‘avoid the default,’ ” she said. “And that was across the board: the board of directors, directors, casting, staff, associate artists. Default is what creates and perpetuates racism and the same storytelling in American theater. So, default in casting, always just casting light when they don’t specify. Default in attracting new board members by defaulting to people who might be retired and live in Boulder. Like, just default in general, our principal had been to actively disrupt default.”

Local Lab 11’s creative triumvirate of Chase-Hart-Rudnick isn’t the only sign that things are shifting in area theater. Jada Suzanne Dixon is the first Black person to direct a show at the Arvada Center. Her finely comedic production of “Stick Fly” — Lydia R. Diamond’s family drama (with a capital “D”) — is in repertory until May 19.

Hart is pulling off a similar first for Littleton’s Town Hall Arts Center, directing the musical “Once On This Island,” which runs through May 8.

“Over the last two years, we’ve developed 18 plays, and because we’re expanding what Local Lab is or expanding the program itself, we’re able to house a diversity of plays or musicals underneath that,” Chase said.

This weekend’s Local Lab 11 does indeed look expansive and meaningful, as well as downright fun.

The changes for Local Theater since 2020 have been bold and at times even “messy,” as Rudnick put it, as the company injects the notion of experimentation back into its Local Lab. “There are things that have emerged from the Lab in the last two years that people have loved and have been transformative,” she said. Rudnick has also received “some of the most frustrated, finger-Waggy emails I’ve ever gotten from audience members who’ve been disappointed in what Lab looked like.” As it should be.

“For the first time, I know that I’m doing my job right. We as a collective — Betty, Nick and I — are curating messy, special projects with possibilities,” says Rudnick. “And that finally feels like we’re in the right lane for Local.”