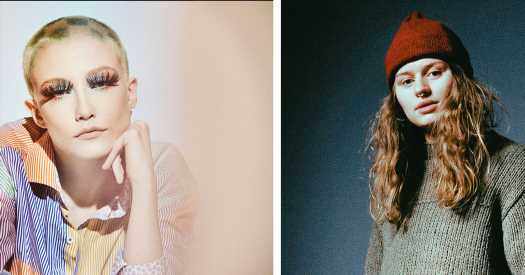 Chloe Moriondo began posting YouTube videos in 2014, when she was 11 years old, part of the early waves of young people who built their musical identity on the platform, one bedroom-pop song at a time. She’d been growing up in public for years by August 2019, when she posted a video titled “a ramble about self identity, growth, and being a lesbian.”

She was evolving, she said, and a lot of the old songs she’d sung (or even listened to) no longer felt quite right. Her tastes were changing, and her confidence was growing. A month later, she posted a cover of girl in red’s “Bad Idea,” and at the end of the performance, spoke about how influential girl in red’s music was becoming on her own songwriting.

When the Norwegian teenager Marie Ulven began posting songs online as girl in red in 2016, she quickly attracted fervent attention for her ecstatically frank and utterly candid declarations of gay love, and quickly built a community for whom girl in red fandom was a safe space for identity expression.

Ulven also provided a raw foundation that’s now being built upon, both by her acolytes and also herself, as is clear from two excellent new releases: “If I Could Make It Go Quiet,” the first full-length girl in red album, and “Blood Bunny,” Moriondo’s major label debut album.

On the robust and vividly plain-spoken “Blood Bunny,” Moriondo, now 18, is a pop-punk whiz, deftly hopping between musical approaches from spare to lushly produced, and emphasizing intimate, cut-to-the-bone lyrics. Most songs are about relationships that don’t quite congeal, like “Manta Rays,” when she sings, “My therapist will tell me that it’s best to let it be/but I wanna light fires, I wanna explode/I want to be everything you want to know.”

Moriondo writes with a winning bluntness, both about her own shortcomings and the objects of her obsession. “I wanna be with her all day/I’m a bitch to everyone else anyway,” she shrugs on the crystalline “Strawberry Blonde.” On the frisky, muscular “Take Your Time,” she bemoans her fate of being in thrall to someone who’s no longer around: “I wanna know/what will it take to make you let me go/You don’t fade like old stick and pokes.”

Musically, Moriondo has absorbed several waves of punk praxis. On “I Want to Be With You,” she’s a maximalist, comfortable with jet-engine-intense production, and “Girl on TV” is keenly tuneful, verging on Avril Lavigne, or even Ashlee Simpson territory. But some songs on this album, like “Rly Don’t Care” and “Favorite Band,” are redolent of the earliest, and sparest, girl in red singles — direct production, and the simple joys of expressing oneself in first person, reveling in the emphatic, liberating power of the “I.”

Moriondo is part of a microgeneration influenced by Ulven’s loud and uncomplicated transparency. (She had been scheduled to open for Ulven on tour last year before the pandemic.) Ulven is 22 now, and her emotional circumstances have become more complex. “If I Could Make It Go Quiet” finds her in the throes of romantic anxiety, singing about relationships that are buckling under the weight of her success. “If I ever make it back/Will I find what we once had?” she sings on “Hornylovesickmess. “Guess I ruined us pretty bad/So don’t ever take me back.”

Ulven is also astute in capturing the pain of coming in runner-up for someone’s affections. “I can’t be your midnight love/When your silver is my gold,” she sings on “Midnight Love,” with vocals suggesting an unusually spooky Dusty Springfield.

Early in her career, Ulven’s production was unfussy, but as she’s developed, her songs have become amplified. “Did You Come?” is rife with moaning feedback, and the lightly curdled “You Stupid Bitch” pulses with a wall of sound that nods to new wave.

“If I Could Make It Go Quiet” was produced entirely with the Norwegian musician Matias Telléz, the only exception being “Serotonin,” which is also produced by Finneas, Billie Eilish’s brother and sonic architect. It’s a lush song that’s also risky, singing about painful, chaotic internal tug of war:

And yet Ulven’s vocals are rendered dreamily, almost inspirationally, over guitars that slash and throb in the manner of loud 1990s indie rock. Her boldness and defiance is taking on new shades — just like those she influenced, Ulven is growing up in public, too.

girl in red
“If I Could Make It Go Quiet”
(AWAL)