In the grand tradition of celebrities telling on themselves via social media (see: Armie Hammer favoriting rope bondage tweets or Scott Disick accidentally copy-and-pasting instructions from his PR team on Instagram), Channing Tatum would like a word.

Surely, you’ve seen the photos of the “Magic Mike” star and Zoe Kravitz galavanting around Williamsburg, Brooklyn, in recent days where they’re getting coffee, buying groceries, sharing a BMX bicycle, inspiring a group of local moms to hunt them down IRL, etc.

Rumors that the two are more than friends have since run rampant, as they are both free agents these days. The two actors are on the rebound after major relationships ― Tatum split with singer Jessie J last year after his marriage to Jenna Dewan ended, while Kravitz’s divorce from husband Karl Glusman was reportedly finalized this week.

But without hearing directly from the stars themselves, how else are we meant to deduce what’s going on between the two? Look no further than Tatum’s slightly embarrassing but mostly endearing Instagram activity.

Take one glance at the actor’s recent follows and you’ll see that not only is he keeping up with Kravitz herself, but he’s also started following four ― count ’em, four ― fan accounts dedicated to the star. 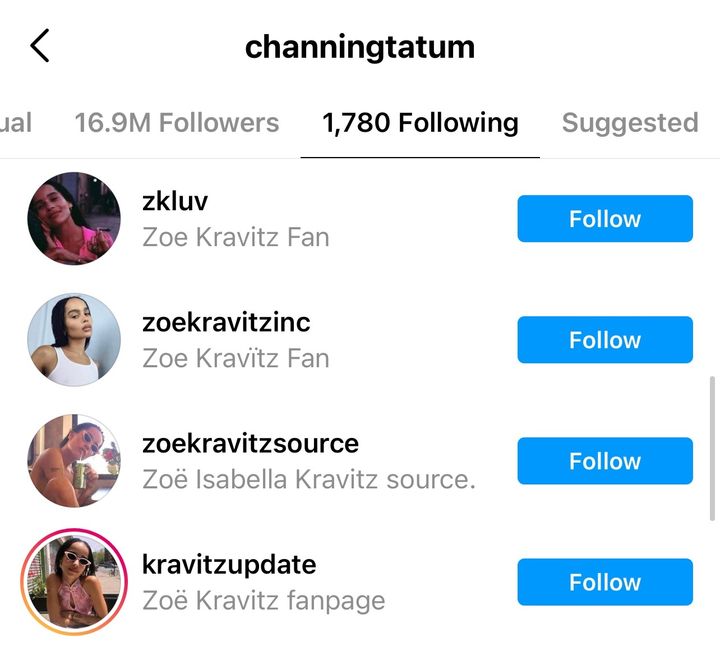 Now, this could just be a case of unbridled professional admiration, as an unnamed source told People back in January after Kravitz’s divorce went public that they were just friends.

“They’re working together on an upcoming project and it’s not true that they’re dating,” the source shared with the outlet at the time.

Months later, the two linked up for Kravitz’s upcoming directorial debut titled “Pussy Island,” which stars Tatum as a billionaire philanthropist and tech mogul who lures a cocktail waitress to the titular locale.

In gushing statements at the time, Kravitz said Tatum, whom she referred to as “Chan,” was her “first choice, the one I thought of when I wrote this character.”

“I just knew from ‘Magic Mike’ and his live shows, I got the sense he’s a true feminist and I wanted to collaborate with someone who was clearly interested in exploring this subject matter,” she said.

Tatum in kind praised Kravitz for casting him in the film, saying, “No one gives me a chance to play a role like this, everybody throws me down a different alley and expects me to do a certain thing.”

In their joint statements, they also openly flirted about how Tatum doesn’t have what it takes to wear Crocs. Kravtiz joked, “There are people out there who can pull off the Crocs thing; I just wasn’t sure you were one of them.”