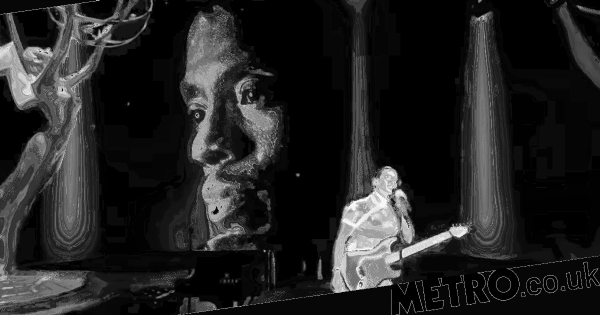 Chadwick Boseman was remembered in a moving tribute during the 2020 Emmy Awards on Sunday night as they took place in Los Angeles.

The awards ceremony went ahead despite the coronavirus pandemic, with host Jimmy Kimmel presenting the show from an empty Staples Centre, as stars joined the ceremony virtually from their homes.

His death shocked Hollywood and the rest of the world, as it came to light the Marvel actor had been secretly battling cancer for four years after first being diagnosed in 2016.

Remembering Chadwick and other stars who died earlier this year, including Glee star Naya Rivera and US presenter Regis Philbin, H.E.R took to the stage to perform a stripped back version of Prince’s hit Nothing Compares 2 U.

Her performance ended with footage of Chadwick delivering a speech playing on a huge screen behind her.

A black and white shot of the star was shown on the screen as H.E.R beautifully performed the hit.

Other stars that were honoured during the ‘in memoriam’ segment included Naya, who died aged 33 in July, actor Kirk Douglas, Fountains of Wayne singer Adam Schlesinger, John Witherspoon and Ja’Net Dubois.

Fans watching were left in tears over the tribute, with one posting on Twitter: ‘Chadwick. oh, this is heartbreaking…heartbreaking. in memoriam. #Emmys.’

Another said: ‘Chadwick came on and I couldn’t stop the tears #Emmys.’

One fan said the performance had left them with ‘goosebumps’, as they tweeted: ‘Goosebumps with that Chadwick Boseman clip. It’s still shocking. #Emmys.’

‘That Chadwick moment got me. Tears. #emmys,’ tweeted one more viewer.

Host Jimmy introduced the in memoriam performance by honouring Ruth, as he said: ‘On Friday, we lost a great American. Ruth Bader Ginsburg was a compassionate and tireless champion of equality and justice.

‘She said her legacy was to make her life a little better for people less fortunate than she. Sounds like pretty good words to live by to me.’

All the winners from 2020 Emmy Awards

Outstanding Lead Actor in a limited series or TV movie: Mark Ruffalo, I Know This Much Is True

Guest Actor in a drama series: Ron Cephas Jones, This Is Us

Documentary or non-fiction special: The Apollo