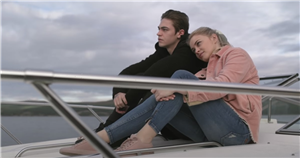 Can Tessa and Hardin Repair Their Romance? The Latest After We Fell Clip Hints at a Maybe

We didn’t think the After franchise could get even more dramatic, but After We Fell is here to prove us wrong. On Tuesday, Voltage Pictures gave us another glimpse of the upcoming third installment of the franchise, which is based on Anna Todd’s book series. In the clip, Tessa Young (Josephine Langford) and Hardin Scott (Hero Fiennes Tiffin) attempt to repair their relationship following the events of After We Collided. Unfortunately, a romantic boat ride can’t repair everything, and the recent trailers show that they will face even more new obstacles as a couple. Be warned, though: some of these scenes are definitely NSFW.

Langford and Fiennes Tiffin first announced that After We Fell and After Ever After were in production back in September 2020, shortly before the release of the second film. The third film is set to release on Sept. 30. Until then, you can revisit the first two movies, which are currently streaming on Netflix, or check out the trailers and clips ahead.