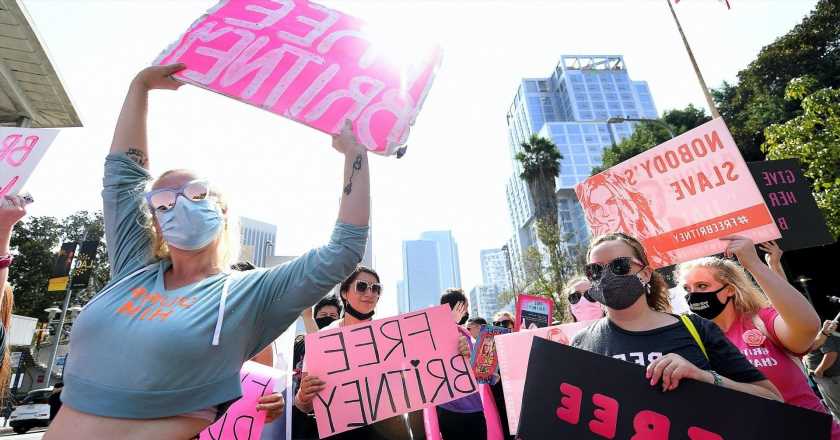 Speaking outside the court on Wednesday (29 September) Spears’ lawyer said the #FreeBritney movement had been “instrumental” to the victory.

Britney Spears has won a long-awaited victory in the fight to remove her legal conservatorship after a Los Angeles judge ruled to suspend her father from the arrangement which has controlled her life since 2008.

The ruling – which is effective immediately – will see the role of conservator handed temporarily to another man appointed by Spears, before another court hearing on 12 November to discuss the termination of the conservatorship completely.

Speaking outside the courtroom after the ruling, Spears’ lawyer Mathew Rosengart – who was appointed by the singer earlier this year after a judge ruled she could choose her own representation – said the fight to end the agreement had been “a lot of hard work”.

“It’s been intense – I’m proud, Britney’s proud,” he continued. “I think the support of the #FreeBritney movement has been instrumental. To the extent that it allowed my firm to carry the ball across the finish line, I thank them as well.”

While yesterday’s ruling does not mark the end of Spears’ conservatorship completely, the suspension of her father means that he will have to hand over 13 years’ worth of filings in the case, including conversations he’s had with his attorney.

It’s for this reason why Spears’ lawyer asked the judge not to dissolve the conservatorship (as Spears’ father requested earlier this month), as he believes the records will reveal the “corruption” his team claim took place during the arrangement.

Rosengart addressed crowds outside the courtroom.

Soon after the ruling was announced, Spears’ fiancé Sam Asghari took to Instagram to celebrate the big news, posting a photo of Spears’ hand with her new engagement ring alongside the words: “Free Britney! Congratulations!!!!!!!!!”

And while Spears is yet to respond directly to the ruling, she did take to Instagram to share a video of herself flying a small plane, to which she added the caption: “On cloud 9 right now.”

Spears’ fight to end her conservatorship comes after she appeared in court in June to ask that the arrangement come to an end, saying she had been “traumatized” by the experience.

Both outside the courtroom and on Twitter, Spears’ fans have responded to the news with jubilation.

“Britney, you don’t ever have to perform again,” read one response. “Now the choice is truly yours. You owe us nothing. You have given us so much of yourself already. We love you!”

While another added: “Congratulations Britney!! You deserve the world and more. We all love you.”