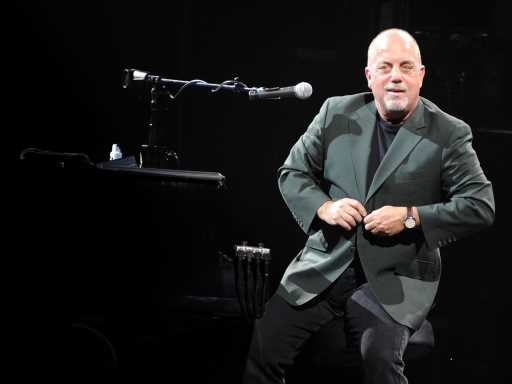 If there’s one thing Billy Joel has passed down to his kids is a talent for singing! The legendary musician posted the cutest Instagram video of one of his daughters singing “Happy Birthday” to her big sister — and we can’t get enough of her.

The musician has three daughters, Alexa Ray, 35, from his second marriage to Christie Brinkley, and Della Rose, 5, and Remy Anne, 3, from his fourth marriage to Alexis Roderick. The video features Della honoring Alexa on her 35th birthday in the most dramatic fashion. Wearing a black T-shirt with the words “Big Sister” splashed across her chest and adorable red shorts, she entered from behind the couch for her solo. Della hit just about every note and even added a bit of flourish to the end of the song by slowing it down for full effect — the music genes definitely run in this family.

The 71-year-old dad sweetly captioned the video, along with two photos of Alexa with her little sisters as infants, “Happy Birthday to our big sister @alexarayjoel. You have been singing us lullabies since we were born. We are so excited to finally get to sing to you on your birthday. We love you more than words can say!”

Despite the 30-year difference between his oldest and middle daughters, all of his kids have obviously formed an unbreakable bond. Alexa responded to the post, “Aww My Little Diva!

Just caught that second & third pic in there, too…

love you rosebud, thanks for serenading me.”

If you need more cuteness to add to your day, Billy also posted his youngest daughters’ interpretive dance to Taylor Swift’s “You Need to Calm Down” from Christmas morning. Della and Remy, dressed in their holiday finest, slowly grooved to the beat of the “Evermore” singer. Even the family dog tries to get involved, but realizes he’s no match for the two girls.

With Alexa already following in her father’s footsteps as a jazz musician, it would be no surprise to see Della and Remy shining up there on the stage when they get older. And we’re pretty sure proud papa Billy is cool with his kids going into the family business — like father, like daughters.

Before you go, click here to see all the celebrities who kept the baby news a secret.