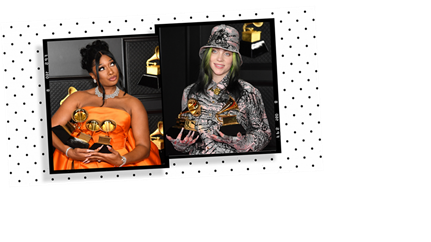 Kayleigh Dray is Stylist’s digital editor-at-large. Her specialist topics include comic books, films, TV and feminism. On a weekend, you can usually find her drinking copious amounts of tea and playing boardgames with her friends.

“I want to cry thinking about how much I love you,” Billie Eilish told Megan Thee Stallion at the 2021 Grammy Awards.

Billie Eilish and her brother Finneas have, for the second year in a row, won the Grammy for Record Of The Year.

That’s right: the musical siblings have taken home the 2021 prize for everything i wanted, pipping the likes of Doja Cat, Dua Lipa, Post Malone, DaBaby and Roddy Ricch, Black Pumas, Beyoncé, and Megan Thee Stallion to the post.

“This is really embarrassing for me,” said Eilish in her acceptance speech. “Megan, girl… I was gonna write a speech about how you deserve this but then I was like, ‘There’s no way they’re going to choose me.’ I was like, ‘It’s hers.’”

The musician continued: “You deserve this. You had a year that I think is unstoppable. You are a queen – I want to cry thinking about how much I love you.

“You deserve everything in the world, I think about you constantly… you deserve it.”

Then, in a moment reminiscent of the 2017 Grammys, where Adele insisted that her Album of the Year award should have gone to Beyoncé for Lemonade, Eilish asked that everyone applaud Megan before continuing her speech.

And, naturally, everyone on social media loved her for it.

“Graceful move from @billieeilish in the unenviable Adele spot,” tweeted one.

“Billie is a beautiful human being, beyond her years,” added another.

And still one more said: “Billie Eilish wins the Record of The Year award and gives major props to Megan Thee Stallion… respect.”

Megan didn’t go home empty-handed, however. In fact, she made history as the first female rapper to win Best Rap Song (with Beyonce for their Savage collaboration), and also scooped up Best New Artist.

And, in one of the most emotional speeches of the night, the musician dedicated her best new artist prize to her mother, who died of a brain tumour in 2019.

“She couldn’t be here with me tonight,” Megan said on the red carpet, as per the BBC.

“But she always knew that I would be at the Grammys, and I would be like, ‘Oh mom, that’s so far away’ but it came so quick.