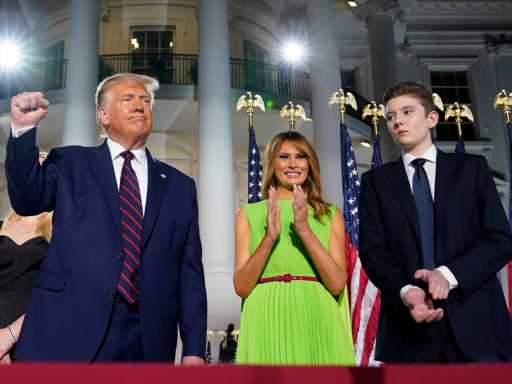 Melania Trump isn’t ready to make New York City her home again right now. The former First Lady and son Barron Trump will be remaining at Mar-a-Lago in Florida for the upcoming school year, which was confirmed when the 15-year-old’s new private school, Oxbridge Academy in Palm Beach, sent out a note to parents.

‘We look forward to welcoming him into our school and community,’ the school’s Director of Advancement Scott Siegfried said in an email, per the Daily Mail. With Barron starting at the $34,800 per year prep school, this firmly cements the Trump family’s foundation in Florida. They are committed to their son’s education for the 2021-2022 school year, so it seems that Melania is OK with putting New York City on the back burner for now.

Earlier in the summer, she was spotted in Manhattan for the first time since leaving the White House in January. She’s been focused on getting Barron settled in his new life outside Washington, D.C. and she only makes appearances with husband Donald Trump when needed. “Melania is happiest when she is with her own family members, including her son,” a Trump insider told People. “She is not dumb, she just knows how to handle her life to make it as fulfilling for her as possible.”

So even after spending the summer with Donald and Barron between Trump Tower in Manhattan and their home at Trump National Golf Club Bedminster in New Jersey, the family isn’t ready to make New York City their full-time residence again. Barron’s schooling and overall well-being are the highest priority for Melania, so that was probably taken into consideration as they decided to continue with their Florida living situation for another year. It’s also easier for her to fly under the radar and away from the prying eyes of the paparazzi in Florida versus in their New York City home. “She will do whatever she can to avoid being photographed or interviewed,” the source summed up to People. “She remains low-key, enjoying her life with her family.”