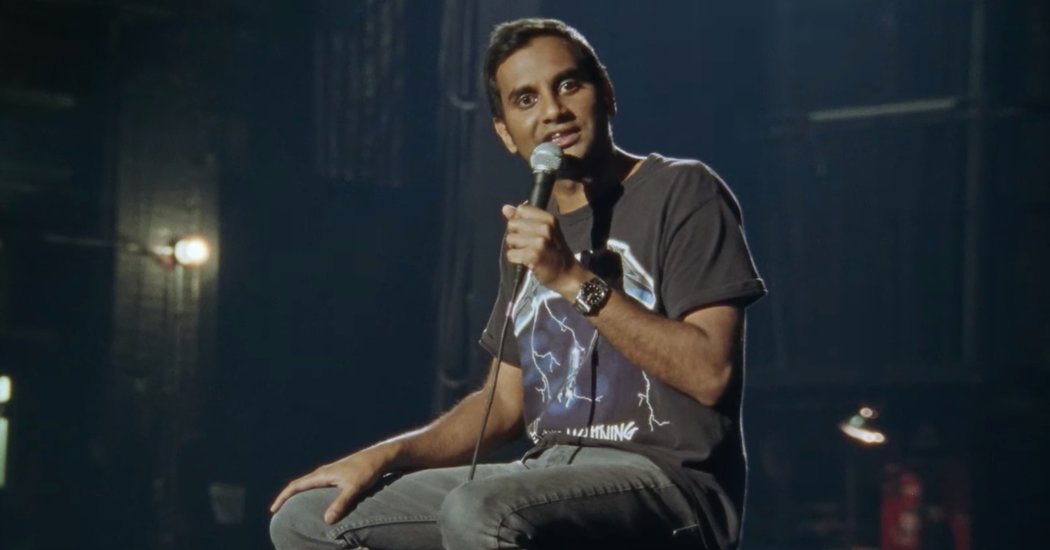 Crossing the street to the BAM Opera House while a moody Velvet Underground song plays, Aziz Ansari tentatively pokes his head past the stage door at the start of his new special, “Right Now,” then walks in to a roaring crowd and tells a story about a guy confusing him for Hasan Minhaj, another Indian-American comic.

Ansari dramatizes this encounter in his signature style, rapid-fire dialogue in a swaggering high-pitched voice, comedy’s answer to the flow of Eazy-E. To prove he knows who Ansari is, the stranger lists his credits: “Master of None,” “Parks and Recreation,” before adding, “You had that whole thing last year, sexual misconduct.” To which Ansari interrupts, furiously shaking his head and hands: “That was Hasan.”

He tells this ice-breaking joke in a stunning, slightly ominous shot composed by the director Spike Jonze: silhouetted people watch him from stage right, the light from the doorways they’re standing in forming the shape of knives pointing at the comic. Ansari then delivers a quiet monologue without jokes addressing the scandal spawned by an article on a now-defunct website about a date with a woman who accused him of inappropriate behavior. The story led to criticism of Ansari as well as a backlash.

This speech, or any other mention of the allegation, was not in Ansari’s show in December, when I saw him on tour (this special was shot in May) and in a column, I argued that avoiding his scandal was an artistic mistake, particularly because his show criticized a culture of online outrage in a way that felt informed by his experiences. By framing the new special around his personal story, and also trimming and refining some weak spots, his act now coheres, taking on a new force and clarity, one that represents his finest, boldest and probably most polarizing work. 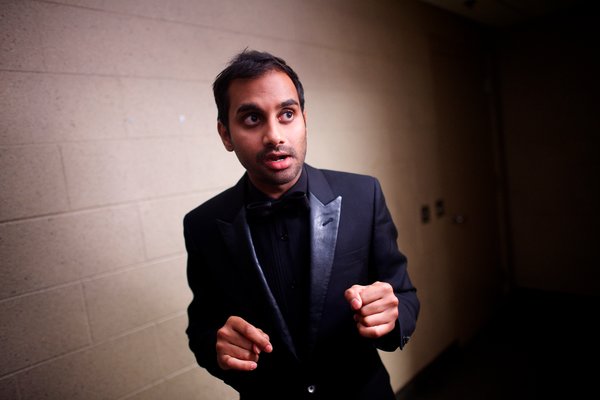 For years, I have been at odds with the consensus about Ansari, one of the most popular comics in America, finding him to be a gifted if often glib stand-up, covering up mediocre material with high-energy performance. But this special represents a shift in emphasis. He’s lower key, sitting more than pacing, delivering tight if still voluble bits that earn laughs through surprising punch lines more than act-outs. And his jokes are structured deftly, building on one another in service of arguments that are meant to unsettle as well as amuse.

He ditched the leather jacket he was wearing on tour and is now sporting only an old Metallica T-shirt and jeans. There’s still a certain slickness in how he presents his story, and some will find his serious interludes too self-pitying. Others might find this show is just crafty image rehabilitation, and they won’t be entirely wrong. But it’s more than that. Ansari’s standup has been marked by a light, controlled style, but here, he weaves personal material into a critique of the culture that reveals a new, deeply felt passion.

Ansari, now 36, often kept his emotions in check behind a cool veneer, but in “Right Now,” he expresses not just notes of sadness and regret, but also anger. It’s submerged, to be sure, but apparent in how he goes after the way our culture rewards conflict over debate and treats shaming as entertainment.

His primary technique for communicating this idea is crowd work, which he has long done, but to less aggressive effect. His interactions with the audience here are pointed, strategic, a conversation that is really setting a series of traps. It is crowd work that mocks the wisdom of the crowd. He makes people cringe without teetering over into cruelty.

In a bit about the ridiculousness of being criticized for using the word “niggardly,” he singles out a white man in the audience and asks him to say it into the microphone. The man’s anguish gets a big laugh. In another even more dramatic moment, Ansari delves into online scandals by pranking the audience (saying more would be a spoiler) to expose how badly people who know nothing about a subject want to weigh in.

“You think your opinion’s so valuable you need to chime in” on stuff that doesn’t even exist? he demands, pivoting to a more general point about many people debating online: “They don’t really care about learning and exploring and discussing. They just want to chime in with their little programmed reactions.”

This is the bitterest line of the show, and it’s impossible not to think he’s speaking about the viral reaction to his scandal. It’s ungenerous, which is not to say it doesn’t contain some truth, but some of Ansari’s analysis, like some of the worst internet discussion, cuts corners in service of a point. When he talks about why R. Kelly is being canceled, he says the reason is the music star’s crimes were put in a “bingeable documentary.” What’s missing here is any mention of #MeToo, the real revolutionary shift that led to not just more scrutiny of Kelly but of Ansari as well. There’s also a thin section on gender disparities in birth control that feels tacked on.

Still, Ansari’s comic mockery has gotten more precise since his tour last year, which broke down the world into woke people, Trump people and everyone else. Now he narrows his frame to the warfare between performative progressives and their antagonists bellowing about the PC police.

Ansari delicately weaves his critique of this tedious combat into his own personal story, reminding us that he’s not that good of a person. Toward the end of his show, he does some material about his grandmother suffering from Alzheimer’s that seems intended to soften us up.

He talks about how poorly we use our time with our parents when you consider how few years left we actually have with them. He puts a number to it to really pull on your heartstrings. And then he moves from the deaths of relatives to his own. Once again in a soft voice, almost a whisper, he describes how he’s more grateful than he has ever been, thanking the audience.

This reminded me of a conversation the old Aziz had on a Pete Holmes podcast in 2013, a fascinatingly tense hangout between two peers of contrasting styles. Holmes, who performs introspection as flamboyantly as Aziz avoids it, pressed him to consider what happens after death. “Why waste time thinking about it?” Ansari said. When Holmes brought up hell, Ansari imagined how he would act on Judgment Day. “I would just reason with the guy,” he said. “I’ve been a good dude. You really going to put me in hell with these people who murder people?”

The Aziz of this new special sounds a lot different from that carefree up-and-comer. He understands that his ability to talk his way out of things or to control how people see him is limited. And he wants us to know that he feels terrible and that he’s changed. And also, whether or not the afterlife is basically reasonable, the world we live in right now is most certainly not.