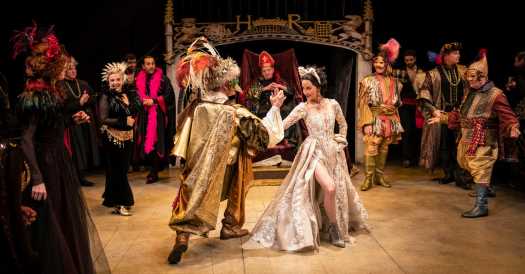 STRATFORD, Ontario — On a bright day here, not far from the Avon River, I saw jealous Othello walking in the market square.

Also spotted, near a coffee shop: Mistress Ford of “The Merry Wives of Windsor,” whose credulous husband thinks she is trysting with fat old Falstaff.

And wasn’t that Orin Scrivello, the gas-huffing, girlfriend-beating dentist from “Little Shop of Horrors,” on his cellphone?

Pay an extended visit to the Stratford Festival in midsummer, as I did earlier this month, and you may find theater spilling onto the streets. Over the course of a week I saw eight of the nine shows currently on offer; three more will join the repertory soon.

From previous, shorter visits, I was already familiar with the way plays in proximity start talking to one another, seeming to raise common themes and bat about their differences. I had also seen how actors, switching among multiple roles each week, inevitably brought bits of each with them: a perfume of Prospero, an aura of Miss Adelaide.

But when you spend more time at the festival, and five or six hours a day in dark theaters, something else happens: The dark starts to leak. Not only do you see the plays’ characters everywhere, but you also feel the world taking up the threats and questions of the works.

For me, that’s the joy of Stratford, the largest repertory company in North America, now in its 67th season. Even if the individual productions are often B-plus efforts — rarely as good as the best versions you’ve ever seen but almost always among the better — the variety and cleverness of the programming more than make up for it. Under the artistic directorship of Antoni Cimolino, the mix of Shakespeare, classics, musicals and new work demonstrates the continuity of theater through the ages, as well as the continuity of injustice that makes it necessary.

Not that you’d guess this from the season’s official theme: Breaking Boundaries, an upbeat phrase that could be applied to almost any play ever. No matter; the real theme, the result of Mr. Cimolino’s pairings and groupings and casting, is considerably darker and more specific. Catch “Othello,” “Merry Wives,” “Little Shop,” “Private Lives” and “Henry VIII” — as well as a new play, “Mother’s Daughter” — and you cannot miss it: the paranoid need of men to regulate women’s sexuality, as a source of both pleasure and progeny. 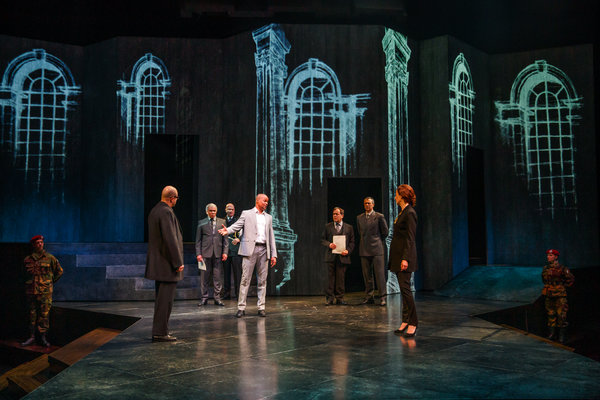 That comes as no surprise in “Othello,” sharply directed here by Nigel Shawn Williams on a modern set with overly literal projections of trickling blood and what look like lice. (“I’ll pour this pestilence into his ear,” Iago tells us in one of his chilling soliloquies.) As the Moorish general in the Venetian army who marries Desdemona, the white pearl of that society’s aristocracy, Michael Blake establishes the psychosexual drama from the start. He wears his confidence like a cockscomb but is clearly more at a loss in love than he ever was in war.

Though race can’t help but be a theme in “Othello,” it is not the main one here; Iago’s hatred, and Othello’s susceptibility to it, seem to stem less from each man’s response to outsiderness than from their common fear of cuckoldry. (Iago imagines that Othello has slept with his wife, Emilia, here a soldier in Desdemona’s retinue, not just her maid.) In a superb performance, Gordon S. Miller (a ringer for Tony Hale of “Veep”) gives us Iago as a hypercompetent desk jockey who turns, after hours, into a vicious, fake-news-spreading incel.

By the time Emilia points out that the failings women regularly stand accused of are merely reflections of men’s worse ones — “The ills we do, their ills instruct us so” — it’s too late for Desdemona. She has made her bed and will die in it.

I left “Othello” thinking, oddly enough, about Vice President Mike Pence and other politicians who observe the “Billy Graham rule,” not allowing themselves, even at work, to be alone with women who aren’t their wives. So destabilizing are female bodies, and so fragile men’s egos, that, even today, they must be kept apart.

That idea came into relief, in both senses, in “Little Shop” and “Private Lives,” the sour Noël Coward comedy of divorce and infidelity. But it became most obvious when the tragedy of “Othello” flipped into the comedy of “Merry Wives.” The absurd fear harbored by Mr. Ford that his wife is sleeping with Falstaff is matched only by Falstaff’s absurd fantasy that Mistress Ford and her bestie, Mistress Page, are gaga for him.

Mr. Cimolino’s charming production is set in a town like Stratford at the time of the festival’s founding in the early 1950s. (The set resembles what you see while wandering the residential streets.) It’s an apt connection, not just because of the story’s inherent theatricality: The women devise and enact “scripts” of comeuppance for the men.

Though they are radiantly successful, we are always aware that the success depends on leveraging their limited powers. (One scene is trenchantly set among hair dryers in a beauty salon.) Especially in the haunting conclusion, a community prank that suggests the birth of theater itself, I thought about how acting was one of the first professions available to women.

Another, for a lucky few, was queen. Or at least, as “Henry VIII” demonstrates, they were lucky for a while.

This rarely seen collaboration between Shakespeare, at the height of his powers, and John Fletcher, at the far lower height of his, compresses a 15-year slice of Henry’s life, from 1520 to 1533, into what seems like a few days.

Even if you don’t know which passages scholars say are Shakespeare’s and which Fletcher’s, your ear will guide you accurately enough. Much of the play feels thin yet padded, a pro forma tribute to the House of Tudor; but then there are scenes so rich in poetry and emotional detail they can tear your heart out when properly performed.

These are mostly the scenes with Queen Katherine, formerly of Aragon, for whom faultless chastity and obedience to her husband weren’t enough to outweigh her “failure” to provide a male heir. Rarely have I seen fury and sadness and residual love so potently brewed as in Irene Poole’s blistering performance here, under the direction of Martha Henry, a noted Shakespearean herself. Ms. Poole fulfills the play’s alternative title, “All Is True.”

Still, Katherine gets sidelined, and the play ends with the glorious birth — to Henry’s second wife, Anne Boleyn — of the future Elizabeth I. Not that this ultimately helped Boleyn, who was beheaded not three years later on charges that, naturally, included adultery.

Elizabeth makes a more substantial appearance, as the 20-something Bess, in Kate Hennig’s “Mother’s Daughter,” commissioned by Stratford and directed by Alan Dilworth. But the play, the third in a series of Ms. Hennig’s explorations of Tudor royals, mostly focuses on Bess’s half sister, Mary, maligned by history as Bloody Mary for the kind of executions we take for granted in kings.

Also recurring from “Henry VIII” is Mary’s mother, Katherine, now a ghost who answers to her Spanish name, Catalina. Once again, Ms. Poole is fierce, but in “Mother’s Daughter” her mission seems less pious. The play concerns her spectral efforts to assure the continuance of her Catholic line by getting Mary (Shannon Taylor, excellent) to kill a couple of Protestant rivals: the dashing Bess and the naïve Lady Jane Grey. And also, yes, by getting hitched in time to produce an heir; she was already an old maid of 37 at her coronation.

Ms. Hennig’s feminist revision of history — she makes Mary’s chief political aides both women — is fascinating and bracing, with its bloody-minded parental ghost an especially pungent inversion of expectations (and of “Hamlet”). Does she make a convincing case for Mary as a Tudor action hero, defeating male attempts to control her marital and maternal choices?

It would be nice to think so, but Mary reigned just five years, having indeed married but suffering two false pregnancies and leaving no heirs.

Only after heading into the Stratford night, with all the other plays’ characters hovering about, did I reflect that the Tudor woman who actually consolidated power and stayed on the throne long enough to name an age — and to patronize Shakespeare — was Elizabeth, the one we still call the Virgin Queen.

Jesse Green is the co-chief theater critic. Before joining The Times in 2017, he was the theater critic for New York magazine and a contributing editor. He is the author of a novel, “O Beautiful,” and a memoir, “The Velveteen Father.” @JesseKGreen • Facebook