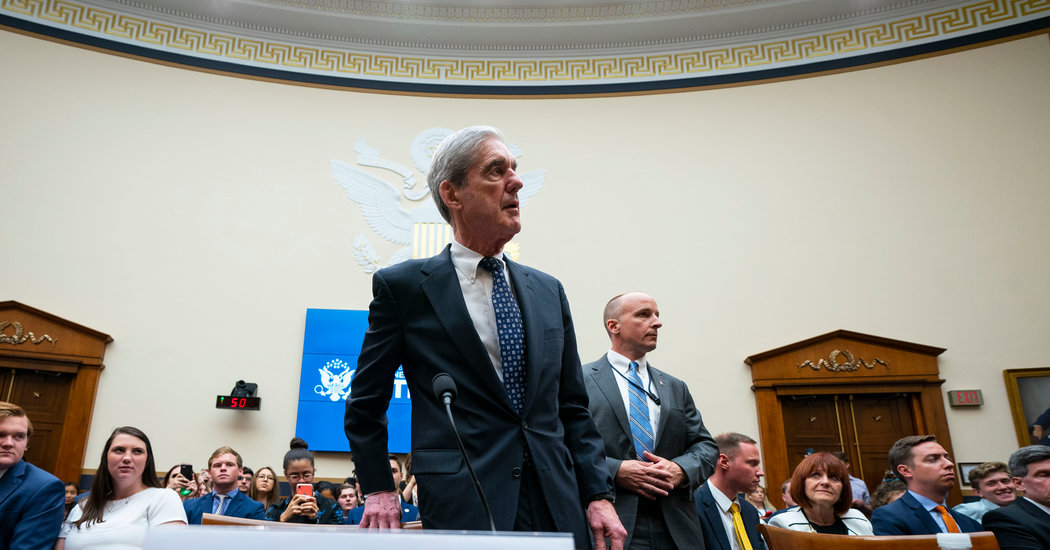 It is a perennial question for TV programmers, from “The Thorn Birds” to “The Handmaid’s Tale”: How do you successfully adapt a big book for the screen?

The further challenge of the congressional committees questioning the former special counsel Robert S. Mueller III on Wednesday was that the book in question — Mr. Mueller’s two-volume report into election interference and possible obstruction of justice — did not want to be adapted.

The book sat in front of them, in the person of Mr. Mueller, who at a news conference in May essentially pleaded that the report be his last word. He brought a thesaurus worth of ways to say, “No comment.”

Faced with a laconic, literally by-the-book lawman, members of both parties used him as a prop in their own testimony. One party wanted to create a episodic narrative of the report’s findings; the other wanted to demolish or muddy that story. The Democrats sought to read the book to Mr. Mueller. The Republicans sought to throw the book at him.

The idea behind the Democrats’ subpoenaing Mr. Mueller was to create a TV version, or at least an audiobook, of the much-discussed and less-read Mueller Report. Since the author was not about to expand on his writing — or even read aloud from it — they would do it for him.

Some of the most memorable and quotable moments came in the first few minutes. The House Judiciary Committee chairman, Representative Jerrold Nadler of New York, asked a string of yes-or-no questions about President Trump’s claims that the report found no collusion and no obstruction.

“Did you actually totally exonerate the president?” Mr. Nadler asked. “No,” Mr. Mueller replied — an answer that dominated headlines and TV news captions for much of the morning. In a surreal moment, Representative Mike Turner, Republican of Ohio, challenged the answer in the afternoon hearing, showing a screenshot of CNN’s coverage of the morning hearing.

But much of the testimony, especially in the morning, involved reading back long stretches of the report’s legalistic language. Viewers were asked to parse nested double negatives and weigh the difference between deciding not to prosecute and deciding not to decide to prosecute. It was not unconfusing.

To some extent, the Democrats tried to make the book into the show. Representative Steve Cohen of Tennessee gave a dramatic reading of one passage that quoted the president, cleaning it up for morning TV: “This is the end of my presidency. I’m effed.”

They brought graphics with quotes from the report. If Americans weren’t going to read the Mueller Report as a book, they would at least get it as a PowerPoint.

The Republicans, on the other hand, seemed to be producing an episode of “Hannity.” Their questions — heated and rich with references to the Steele dossier, purported conflicts of Mr. Mueller’s staff and charges of witch-hunting — seemed aimed less at a general audience than one of intense Fox News viewers. (Maybe one intense Fox News viewer in particular. I’m just guessing.)

The president’s defenders didn’t seem to expect answers; more than one, in fact, cut Mr. Mueller off when he did try to answer, citing limited time. They had their own show to perform. “Donald Trump is not above the law,” Representative John Ratcliffe, Republican of Texas, told Mr. Mueller, “but he damn sure should not be below the law.”

Generally, Mr. Mueller’s answers were parsimonious. Often, they were abrupt. Occasionally, they were coy. When Representative Veronica Escobar of Texas, a Democrat, asked Mr. Mueller about the “constitutional processes” that might deal with accusations against the president, he answered, “I think I heard you mention at least one.” Was it impeachment?, she asked. “I’m not going to comment.”

It was like some sort of obscure riddle contest, with questioners trying to guess the magic words that would get the sphinx to reveal its secrets. (If only someone had asked, “What have I got in my pocket?”)

Of course, the expectation was that the hearings wouldn’t break new information. In that sense, they didn’t disappoint. The real calling card was an extended appearance, at last, by Robert Mueller, national man of mystery — someone who, as Lester Holt put it on NBC, “has figured in our conversations for more than two years now” yet “a lot of us don’t remember or hadn’t heard his voice.”

That voice was of someone who wanted to speak as little as possible. He spoke carefully, at times halting and fumbling for words. He grew more forceful as the day went on, especially regarding Mr. Trump’s embrace of WikiLeaks’ release of stolen campaign material, which Mr. Mueller permitted himself to call “problematic.” But he was not about to write himself an Aaron Sorkin moment.

He came across neither as the avenging angel of Resistance fan-fiction or the rabid partisan of Republican portraiture. He was no myth. He was just a man, cautious, maybe a bit hard of hearing, leery of over-speaking and overstepping, bound to the proprieties of another time.

In that other time, a book two years in the making might have spoken for itself. In this one, it needs to enter the raging mediasphere. That required an event, and Mr. Mueller was drafted to be it.

And now his story goes back to the scrum, with Chuck Todd scrutinizing the “optics,” the president retweeting the Fox News verdict (“a disaster”) and analysts solemnly debating whether it was a “game changer.” Mr. Mueller is done talking. The rest of the world is glad to keep speaking for him.

James Poniewozik is the chief television critic. He writes reviews and essays with an emphasis on television as it reflects a changing culture and politics. He previously spent 16 years with Time magazine as a columnist and critic. @poniewozik