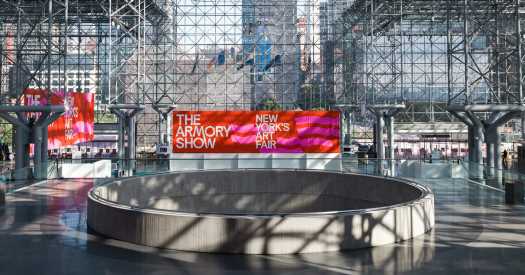 Even before Covid, the art world was changing rapidly. Sales that used to happen in New York or Basel, via hushed conversation, now happen through Instagram all over the world. Large galleries are merging to keep up with mega-galleries, while small galleries, somehow, keep multiplying.

From a strictly business point of view, this fall’s Art Week — which was postponed from spring and runs through Sunday — represents an attempt to carry on with the way things used to be, albeit with some adjustments. The Armory Show, the first major American art fair since the pandemic, has become even more American as travel restrictions and complications knocked 55 mostly European exhibitors into the fair’s new online-only component. Visitors to the sprawling Javits Center in Manhattan, the show’s new home, will have to prove that they’re vaccinated or have a recent negative coronavirus test, as they will at most of the week’s venues. (Check health protocols beforehand.)

When the Armory Show moved to the fall, satellite shows such as Spring/Break, Art on Paper, Clio, and the stylish little Independent followed it to September. The all-new Future Fair, founded in 2020, is finally happening in person, too. By and large, these are the New York art fairs as you’ve known and loved, or hated, them, and it simply isn’t clear yet if attendance and sales will keep their model viable.

For most people, of course, the business of art is in the background right now. Asked what counts as a success at the gallery’s first live fair appearance since Covid, Lisa Spellman, the founder of the 303 Gallery, replied, “Just seeing people!” Ebony L. Haynes, who will be directing the David Zwirner gallery’s new TriBeCa space in October, said, “You can never replace seeing art in person.”

That excitement itself is grounds for optimism. “One of the main reasons for a thriving art market is exciting art,” said Jeffrey Deitch, a gallerist showing at the Armory. “And we have exciting art right now.”

And for the first time in a long time we also have a community seeing that art together. As Tom Eccles, who directs the Hessel Museum of Art, put it, “Art needs, or the art market needs, a society around it.”

What follows is a guide to the highlights of a defiant, resilient, precarious and exciting new season of art — and its society — in New York. Martha Schwendener reviews the Independent Art Fair, while Siddhartha Mitter takes on the new Future Fair, and I preview the Armory Show, below.

What to See at the Armory Show

The 157 exhibitors at the Javits Center are divided into sections: the presentations in Focus, curated by Wassan Al-Khudhairi, of the Contemporary Art Museum in St. Louis, are more topical; Presents includes younger galleries; Solo is for single-artist presentations; and Galleries includes larger names.

Platform, a free-standing section in the middle of the hall (look for Michael Rakowitz’s terrific cardboard relief sculptures and an enormous painting by Benny Andrews), was curated by Claudia Schmuckli of the Fine Arts Museums of San Francisco. Here are the galleries not to miss, along with their booth numbers.

When the Haitian American artist Didier William started showing in New York, he was painting dark figures on wooden panel and scoring them with hundreds of little eye-shaped pits, suggesting that to be alive, especially as a Black man, was to be injured, but that to be injured was also to see. His latest figures are still covered with eyes, but they’re also more confidently modeled in space, as well as dressed in nets of brightly colored paint drops. “Just Us Three,” which shows two nude figures carrying a child, may offer a key to this new exuberance — the artist recently became a father.

Working as a collective called Hilma’s Ghost, in consultation with the “professional witch” Sarah Potter, the artists Dannielle Tegeder and Sharmistha Ray recently put together a gorgeous new tarot deck of geometric abstractions. The original 72 drawings — along with a few related paintings — are on display here. The debt to Hilma af Klint is obvious, but Hilma’s Ghost also drew from an artist of the occult — Pamela Colman Smith’s drawings for the classic Rider-Waite tarot card deck, and the results are a fascinating mélange — trippy but functional, busy but harmonious. (Decks are also available.)

The Irish-born, New York-based artist George Bolster identifies a curious aspect of science-fiction visuals: that the most convincingly otherworldly landscapes are the ones right here on Earth. Shooting ghostly scenes of the American West on hi-res video, he picks out stills and renders them as tapestries in warm, mildly unreal colors. They’re like pharmaceutical ads from some alternate America where research on psychedelics never paused.

At the Crow Fair, an annual get-together hosted by the Apsáalooke (Crow) Nation in Montana, people decorate their cars with textiles and other meaningful objects and drive in a parade. Photographing these vehicles, cutting them out and mounting them against patterned fabric, the Crow artist Wendy Red Star translates these gestures into a drastically different medium and context. Along with the photos is a sculpture of a gray pickup truck topped with a large war bonnet to match the real truck driven by her father, a Vietnam veteran.

Born in Anniston, Ala., and raised in Brooklyn, Jamillah Jennings gained some notice as a sculptor, showing with her husband, the painter Ellsworth Ausby. But in the late 1980s, she started making acrylic-on-paper, photo-based paintings of her father and other Black World War II veterans, as well as other friends and family, and this is the first time the results have ever been shown. With bright, solid-color backgrounds and pale eyes, the portraits knock you out with their candor; their subtle sophistication registers more slowly. Don’t miss the 15 hanging inside the booth’s closet — or two fabulous geometric paintings by Ausby.

One of the pleasures of an art fair is the accidental synchronicity — unplanned echoes between works in two unrelated booths. A large grid of photos documenting a performance called “Daily Chores on 5th Avenue,” by Istvan Ist Huzjan, presented by Proyectos Monclova of Mexico City, shows the artist in black and white proceeding over one cross walk after another as he gathers all the trash on New York’s Museum Mile. On the Javits Center’s other side, Galeria Lume of São Paulo presents an austere group of works that include several photographs of white lines on black pavement by Ana Vitória Mussi.

You can smell the mist and feel the sand underfoot in these acrylic scenes of Iran’s bodies of water, some of them framed in papier-mâché, by the young painter Meghdad Lorpour. One untitled view from the back of a speedboat especially captures the strange allure of a watery vista, an eternity that cares nothing for us and is, therefore, as scary as it is serene.

The English painter Jessie Makinson had just hung her first New York solo show, a sultry and disorienting group of sharply rendered elves and other not quite humans, when Covid shut her gallery down. So this single-artist presentation, centered on an enormous picture of earth spirits consorting around an oily black pool (“Me Time”), is an overdue debut.

Jeanne Liotta makes work about the spheres — the one we live on and those in other orbits. Most distinctive about the colored-gel-on-lightbox collages that appear here, along with a pair of LED sculptures, is how adroitly they sidestep all of the usual associations. They’re not sci-fi, or astrological, or kooky or even scientific. One image of the earth in particular, overlaid with concentric circles and a yellow section, seems rooted in simple observational wonder, though there may be a soupçon of ancient Greek geometry.

In an art fair full of loud colors jostling for attention, six astonishing quilts stand out as the real deal. Made by Elizabeth Talford Scott (1916-2011) in the ’80s and ’90s, the pieces are irregularly shaped and incorporate loose thread, beads, sequins and even tight little bags of polished pebbles along with their many tiny snippets of highly patterned fabric. They’re almost like feats of higher math: They seem much too complicated to hang together as singular compositions, but somehow, still, they do.

A reprise of Kenny Rivero’s recent show at the Brattleboro Museum, this collection of drawings on found paper by the 40-year-old Washington Heights-born artist is an art fair in itself. Naïveté and sophistication, innocence and insight change places in the work so quickly that you feel as if you’re standing on quicksand. All you can do is follow the advice of the red-eyed zombie Superman in one piece and “dream your dreamy dreams.”

A pair of stop-motion animations by Hugo Crosthwaite, about a woman’s journey from Tijuana to the United States, are on display here along with scores of the drawings used to make them. Made with both graphite and acrylic, the busy scenes achieve an entrancing variety of tones: acres of newspaper gray, crinkling across the drawings’ shallow perspective, are periodically cloven by a sudden swath of velvety black.

Through Sunday at the Javits Center, Manhattan. Visitors must wear a mask and show proof of full vaccination or a negative Covid-19 test result within 72 hours. Timed ticketing; thearmoryshow.com.