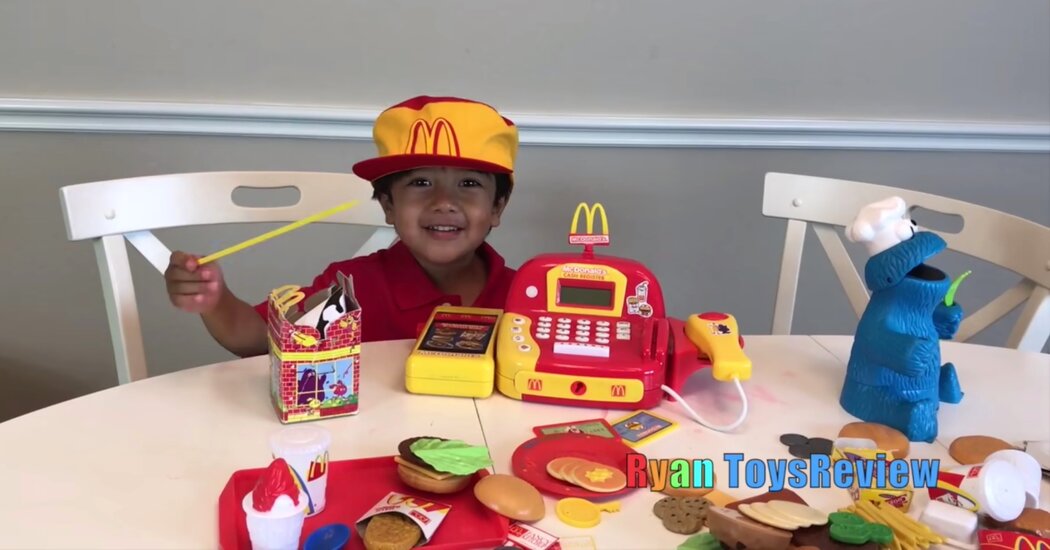 Parents beware: Many YouTube channels that are wildly popular with young children are targeting them with thinly veiled ads for sugary beverages and junk food.

That is the conclusion of a new study published on Monday in the journal Pediatrics. The authors of the study analyzed over 400 YouTube videos featuring so-called kid influencers — children with large social media followings who star in videos that show them excitedly reviewing toys, unwrapping presents and playing games. The study found that videos in this genre, which attract millions of young followers and rack up billions of views, were awash in endorsements and product placements for brands like McDonald’s, Carl’s Jr., Hershey’s, Chuck E. Cheese and Taco Bell.

About 90 percent of the foods featured in the YouTube videos were unhealthy items like milkshakes, French fries, soft drinks and cheeseburgers emblazoned with fast food logos. The researchers said their findings were concerning because YouTube is a popular destination for toddlers and adolescents. Roughly 80 percent of parents with children 11 years old or younger say they let their children watch YouTube, and 35 percent say their children watch it regularly.

Young children are particularly susceptible to marketing. Studies show that children are unable to distinguish between commercials and cartoons until they are 8 or 9 years old, and they are more likely to prefer unhealthy foods and beverages after seeing advertisements for them.

Experts say it is not just an advertising issue but a public health concern. Childhood obesity rates have skyrocketed in recent years: Nearly 20 percent of American children between the ages of 2 and 19 are obese, up from 5.5 percent in the mid 1970s. Studies have found strong links between junk food marketing and childhood obesity, and experts say that children are now at even greater risk during a pandemic that has led to school closures, lockdowns and increased screen time and sedentary behavior. The new findings suggest that parents should be especially wary of how children are being targeted by food companies on social media.

“The way these branded products are integrated in everyday life in these videos is pretty creative and unbelievable,” said Marie Bragg, an author of the study and an assistant professor of public health and nutrition at the New York University School of Global Public Health. “It’s a stealthy and powerful way of getting these unhealthy products in front of kids’ eyeballs.”

Dr. Bragg was prompted to study the phenomenon after one of her co-authors, Amaal Alruwaily, noticed her young nieces and nephews obsessively watching YouTube videos of “kidfluencers” like Ryan Kaji, the 9-year-old star of Ryan’s World, a YouTube channel with 27 million subscribers, formerly named Ryan ToysReview. The channel, run by Ryan’s parents, features thousands of videos of him excitedly reviewing new toys and games, doing science experiments and going on fun trips to stores and arcades.

Children’s channels like Ryan’s World — which are frequently paid to promote a wide range of products, including toys, video games and food — are among the highest grossing channels on YouTube, raking in millions of dollars from ads, sponsored content, endorsements and more. According to Forbes, Ryan earned $26 million last year, making him the top YouTube earner of 2019. Among the brands he has been paid to promote are Chuck E. Cheese, Walmart, Hasbro, Lunchables and Hardee’s and Carl’s Jr., the fast food chains. One of his most popular videos shows him pretending to be a cashier at McDonald’s. In it, he wears a hat with the McDonald’s logo, serves plastic Chicken McNuggets, cheeseburgers and French fries to one of his toys, and then eats a McDonald’s Happy Meal. The video has been viewed about 95 million times.

“It looks like a normal child playing with their normal games, but as a researcher who studies childhood obesity, the branded products really stood out to me,” Dr. Bragg said. “When you watch these videos and the kids are pretending to bake things in the kitchen or unwrapping presents, it looks relatable. But really it’s just an incredibly diverse landscape of promotion for these unhealthy products.”

In a statement, Sunlight Entertainment, the production company for Ryan’s World, said the channel “cares deeply about the well-being of our viewers and their health and safety is a top priority for us. As such, we strictly follow all platforms terms of service, as well as any guidelines set forth by the FTC and laws and regulations at the federal, state, and local levels.”

The statement said that Ryan’s World welcomed the findings of the new study, adding: “As we continue to evolve our content we look forward to ways we might work together in the future to benefit the health and safety of our audience.”

Other popular children’s channels on YouTube show child influencers doing taste tests with Oreo cookies, Pop Tarts and Ben & Jerry’s ice cream or sitting in toy cars and ordering fast food at drive-throughs for Taco Bell, McDonald’s, Burger King, KFC and other chains. “This is basically a dream for advertisers,” said Dr. Bragg. “These kids are celebrities, and we know from other rigorous studies that younger kids prefer products that are endorsed by celebrities.”

To document the extent of the phenomenon, Dr. Bragg and her colleagues identified five of the top kid influencers on YouTube, including Ryan, and analyzed 418 of their most popular videos. They found that food or beverages were featured in those videos 271 times, and 90 percent of them were “unhealthy branded items.” Some of the brands featured most frequently were McDonald’s, Hershey’s, Skittles, Oreo, Coca-Cola, Kinder and Dairy Queen. The videos featuring junk food have collectively been viewed more than a billion times.

The researchers could not always tell which products the influencers were paid to promote, in part because sponsorships are not always clearly disclosed. The Federal Trade Commission has said that influencers should “clearly and conspicuously” disclose their financial relationships with brands whose products they endorse on social media. But critics say the policy is rarely enforced, and that influencers often ignore it.

Last year, several senators called on the F.T.C. to investigate Ryan’s World and accused the channel of running commercials for Carl’s Jr. without disclosing that they were ads. The Council of Better Business Bureaus, an industry regulatory group, also found that Ryan’s World featured sponsored content from advertisers without proper disclosures. And a year ago the watchdog group Truth in Advertising filed a complaint with the F.T.C. accusing the channel of deceiving children through “sponsored videos that often have the look and feel of organic content.”

In March, Senators Edward J. Markey of Massachusetts and Richard Blumenthal of Connecticut introduced legislation to protect children from potentially harmful content online. Among other things, the bill would limit what they called “manipulative” advertising, such as influencer marketing aimed at children, and prohibit websites from recommending content that involves nicotine, tobacco or alcohol to children and teenagers.

The F.T.C. has long forbidden certain advertising tactics on children’s television, such as “host selling,” in which characters or hosts sell products in commercials that air during their programs. Critics say the agency could apply the same rules to children’s programs on the internet but so far has chosen not to.

“It’s beyond absurd that you couldn’t do this on Nickelodeon or ABC but you can do this on YouTube just because the laws were written before we had an internet,” said Josh Golin, the executive director of the Campaign for a Commercial-Free Childhood, an advocacy group.

“These videos are incredibly powerful,” he said. “Very busy parents may take a look at them and think that it’s just a cute kid talking enthusiastically about some product and not realize that it’s often part of a deliberate strategy to get their children excited about toys, or in the case of this study, unhealthy food.”