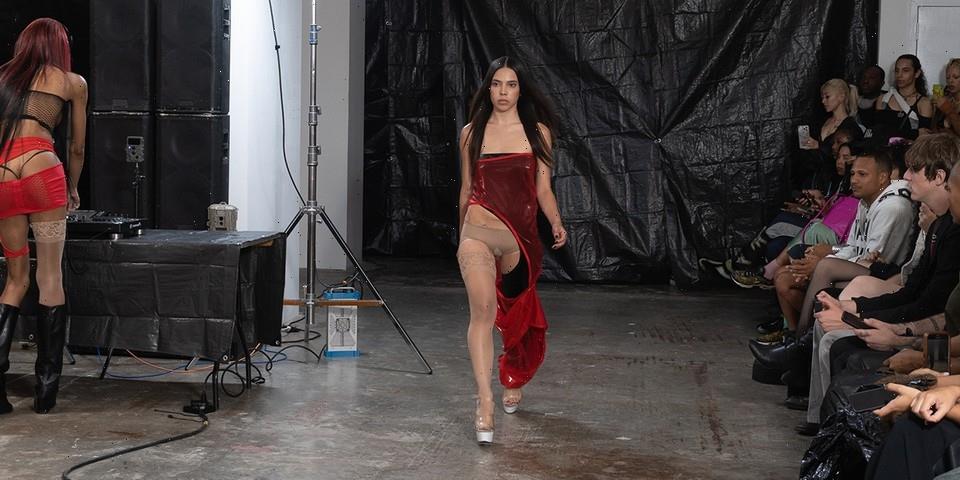 Since her last runway show, Anna Bolina’s widely popular Tube Dress has been spotted on the likes of celebrities like Coi Leray and Slayyyter, who played Coachella in a piece printed with the slogan, “DO WHATEVER YOU WANT NO ONE GIVES A FUCK.” These oversized graphics don’t appear on Anna Bolina’s runway, but her unapologetic attitude shines across subversive evening wear looks in a black, white, red and nude color palette. The entire collection features extreme style juxtapositions between skimpy club-wear and traditional evening wear, sporty and dressy, and, most importantly, strong and fragile.

“I never want the collection to be one note– I like flipping them both on their head and making them distinctly feminine in unexpected ways,” explains Bolina, “It was very baggy but still showed a lot of skin somehow.” As each model carried layers of see-through tulle from recycled David’s Bridal dresses, sourced from secondhand stores, the distinct codes of Anna Bolina’s collection become apparent: asymmetrical cuts, square necklines and strategic layering. Bolina’s favorite look was worn by model Anna Eberg, which the designer describes as “a romper with basketball shorts, and red pleather boots but I had taken the bottoms off.”

Opening the show with a live set of hardcore club music by Chicago-based DJ and model HIM HUN, the looks and sounds got more intense as the show progressed. With a custom sound system set up by her crew of creative collaborators, the intensity is authentic to the raves where the designer and her crew of friends are frequently spotted. Noting the importance of showing distressed looks against ultra-sleek models, Bolina tapped stylist Sonny Molina for glam, never sweaty blown-out hair on the runway.

Him Hun · ANNABOLINA SS23Anna Bolina’s shows represent a rare opportunity for contemporary club culture to mix with high fashion in a way that invites everyone to listen. After browsing the looks from her SS23 Collection, revisit HIM HUN’s live runway mix to immerse yourself in the world of Anna Bolina.
Source: Read Full Article