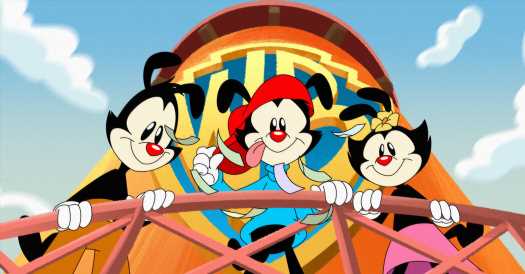 At the end of the first new “Animaniacs” episode in more than 20 years, Yakko Warner, a vaguely anthropomorphic cartoon creature with beaming eyes and floppy ears, stands in front of a blank screen and solemnly addresses the audience.

“Reboots are symptomatic of a fundamental lack of originality in Hollywood,” Yakko declares, “a creativity crisis fueled by terrified executives clinging to the past like rats to the debris of a sinking ship.”

His sister, Dot, joins in the scolding of the entertainment industry. “Have you no shame?” she asks.

At this moment, Yakko, Dot and their brother, Wakko, are presented with a check for $100 billion and a mountainous pile of money that spells out Hulu.

Wakko — who, like his siblings, is ostentatiously dressed in Hulu gear — goes onto explain, “When we sell out, we know we’re selling out, so it’s cool.”

The Warners have not been seen in new installments of their antic, self-referential cartoon series since the original 1990s run of “Animaniacs,” when they and their co-stars barnstormed through historical lampoons and pop-cultural parodies while bumping elbows with the likes of Bruce Willis, Demi Moore and Bill Clinton.

Now, Hulu is bringing back the series — which was itself a throwback to the rebellious sensibility of classic Warner Bros. cartoons from the 1940s and ’50s — in new episodes that will be released on Friday.

This “Animaniacs” revival features its original voice actors playing Yakko, Wakko and Dot (as well as supporting characters like the mismatched mouse duo Pinky and the Brain) in adventures that have been updated for an era of superhero blockbusters, social media influencers and online trolls.

All of these elements would seem more than sufficient for “Animaniacs” to pick up where it left off. But the creators of the new episodes said it has been a particular challenge for them to recapture its unique mixture of comedy styles while aiming simultaneously for a younger audience unfamiliar with the show and for older viewers who grew up on it.

“One of our goals was to make a show worthy of the first one,” said Wellesley Wild, an “Animaniacs” co-showrunner and executive producer. “Let’s try to imbue every frame with that balance of cartoon violence and satire, parody, meta-humor, musical comedy and sometimes quasi-ish educational content.”

Now that it is time to share their work with a fan base that is “so particular and rabid about the show,” Wild said, “I’m terrified.” 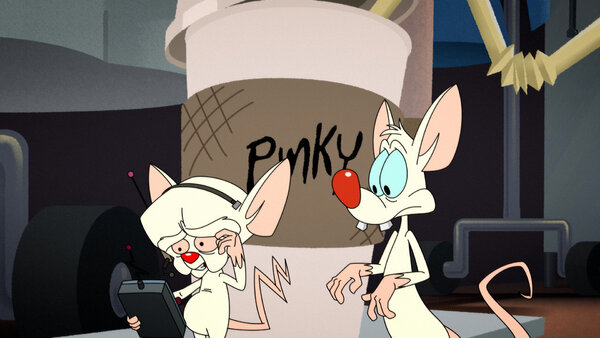 For the principal “Animaniacs” voice actors, there is far less tension about returning to these long dormant cartoon roles. “We’ve become a really happy part of people’s memories,” said Jess Harnell, who plays the diminutive Wakko Warner. “You can’t put a price on that.”

He and his co-stars can remember a time, in the late 1980s, when children’s animation was dominated by TV cartoons that were essentially brand extensions for action figures and other toy lines.

Among the first shows that tried to rekindle a spirit of wholesome lunacy was “Tiny Toon Adventures,” a coproduction of Warner Bros. Animation and Steven Spielberg’s Amblin Entertainment. That series made its debut in 1990 and focused on a new generation of cartoon troublemakers studying at the feet of Bugs Bunny and Daffy Duck.

Its success paved the way for “Animaniacs,” which Amblin and Warner Brothers also produced and which had its premiere in 1993. This show featured a much wider cast of characters and each episode was divided into shorter sketches and musical numbers.

Rob Paulsen, the voice actor who plays the characters Yakko and Pinky, said he could still remember practicing for one of his earliest assignments on the show, a rapid-fire song about global geography set to the tune of “The Mexican Hat Dance.”

“I remember listening to my little Walkman, sitting next to my wife,” Paulsen recalled. “She said, ‘What is that?’ I sung it for her and she said, ‘Is that every country in the world?’ I said, ‘Pretty damn close.’”

To Paulsen, this segment was an early, encouraging bellwether of the show’s freewheeling comic sensibilities. “When the first thing you get is, ‘Tunisia, Morocco, Uganda, Angola, Zimbabwe, Djibouti, Botswana,’ you just go, my God,” he said.

Across 99 episodes that aired from 1993 to 1998 and a direct-to-video special released in 1999, “Animaniacs” was free to indulge its own whims and tastes, immersing its characters in pastiches of “Goodfellas,” “Apocalypse Now” and “The Day the Clown Cried” without straying from its kid-friendly ethos.

“It was social satire in a variety-show mask,” Harnell said. “You can make fun of that stuff on ‘Saturday Night Live’ at 11:30 at night for adults. But how cool is it to poke at it for 8-year-olds and have them get it?”

Eventually “Animaniacs” ran its course and the people who made it moved on to other projects.

“It was a slow decompression,” said Maurice LaMarche, who plays the megalomaniacal Brain. As with other animated shows he has made, LaMarche said, there was a period, as the voice actors worked on the final batch episodes, when they knew the show was ending but hoped it might somehow continue. Then, he said “a deep appreciation for what you’ve got and what you’ve done begins to set in, as well as for the people you’ve worked with.” (He called this process the “Toon Stages of Grief, but with fewer stages because there are fewer frames per second.”)

The cast members continued to work on other shows but remained close friends, often appearing together at conventions and other public events to celebrate the legacy of “Animaniacs” and parry questions from fans who wondered when it might come back.

In 2018, Hulu announced that it had made a deal with Amblin and Warner Bros. Animation to produce new “Animaniacs” episodes. (So far Hulu has ordered two seasons of 13 episodes each.) Behind the scenes, the voice actors were told about the show’s revival at a private dinner with Sam Register, the president of Warner Bros. Animation.

Describing the reaction among his cast mates, Harnell said, “We all looked at each other and went, ‘OK, that’s nice.’ He’s like, ‘That’s it?’ We’re like, ‘It’s Hollywood and we’ll see.’”

Harnell added that they were eager to participate, provided that the new “Animaniacs” treated the series “respectfully and reverently — we love these little characters as much as the people out there love them.”

Though that pedigree might seem to foretell a crass deconstruction of “Animaniacs,” Wild said his approach was not to drastically update the show or throw away its fundamental attributes. “There’s lightning in a bottle here,” he said, “and the first thing I’m going to do is keep that lightning in the bottle, vigilantly.”

As the father of two preteen sons, Wild said that children should be given credit for having sophisticated senses of humor and for knowing when they’re being talked down to.

“They just start to anticipate the jokes based on the setups,” he said. “That informed a lot of the writing on this show — to never talk down to kids, to make things fresh, inspired and original.”

“Because they notice,” he added. “They really do.”

Gabe Swarr, a co-showrunner and co-executive producer who oversees the show’s animation, said that character designs on the new episodes had been streamlined while remaining faithful to their original aesthetics.

“If you just remove one hair, that’s one less hair that everybody has to draw 1,000 times,” said Swarr, who has previously worked on shows like “Dexter’s Laboratory,” “Kung Fu Panda” and “The Penguins of Madagascar.” (He estimated that 90 to 95 percent of the animation on the new “Animaniacs” was drawn by hand.)

But the “Animaniacs” revival does not include original contributors like Tom Ruegger, a writer and producer who helped to create the series (as well as other Warner Bros. Animation shows like “Tiny Toon Adventures”).

Ruegger said that, though he had hoped “to play a significant role” in the reboot, he was not involved in discussions to restart the show or asked to produce the new series. Though he was later invited to submit a script for a new “Animaniacs” segment, Ruegger said he felt that “basically it would be like an audition and I just didn’t feel comfortable auditioning for a show that I created.”

“I don’t know the reasons they did it that way and I don’t know how they justify it,” Ruegger said. “Ethically, it seems really wrong.” (A spokesman for Warner Bros. declined to comment.)

LaMarche said that he and his “Animaniacs” co-stars have embraced the new producers and found them to be open and mindful collaborators.

Describing an early voice-recording session that he had with Wild, LaMarche said, “There was onetime that I piped up, when I felt Brain was being particularly callous, beyond what was the norm even for his legendary, curmudgeonly self.”

After feeling that his recommendation was heard, LaMarche said, “I’ve never felt the need to say anything again, because Wellesley and his creative team honestly get who Pinky and the Brain are.”

Tress MacNeille, the veteran voice artist who plays Dot on “Animaniacs,” said that the series was coming back at an ideal moment — a time when there are more animated shows than ever to choose from, but few that provide its specific kind of carefree, uncomplicated comedy.

“You see quite a few cartoons — none that I’m in, mind you — that make me sad,” she said. “But ‘Animaniacs’ is good-spirited. It doesn’t make you sad or angry or irked. It’s not super-message-y.”

“That’s what makes a good cartoon to me: You want your entertainment, man, you don’t need a lecture,” she continued. “A happy, fun, clever amusement — we can always use that.”