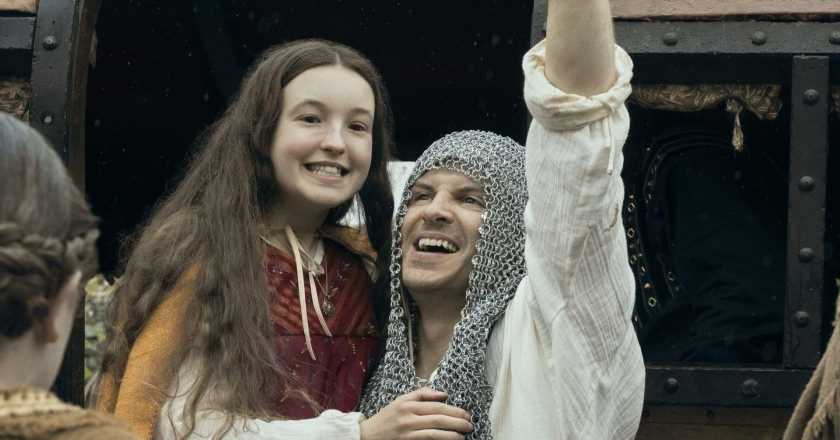 There’s a definite chill in the air, which means we’re more than ready to activate ’autumn mode’ and spend our nights cuddled up on the sofa in front of some excellent (and incredibly cosy) films and TV shows. Thankfully, Amazon Prime Video is serving up the goods with Lena Dunham’s adaptation of Catherine Called Birdy – a seriously star-studded period drama with a Girls-esque bite to it.

Interested? Of course you are. Here, then, is everything you need to know about the film that critics are hailing as “charming, clever and altogether delicious”.

Written and directed by Lena Dunham, Catherine Called Birdy sends us rocketing back in time to 1290. There, we join Lady Catherine (known as Birdy, obviously) – aka the youngest child of Lord Rollo and Lady Aislin – as she plays in the dilapidated grounds of Stonebridge Manor, her family’s estate.

It’s clear that, much like the family,the house has seen better days. And, as was so often the case for young girls in medieval England, the destitute Rollo sees Birdy as his ticket out of financial ruin… but Dunham has tried to upend expectations of a medieval marriage-minded father as a gross or brutish figure.

“In [Karen Cushman’s] book when you read him, he’s this brute,” she tells Entertainment Weekly.

“It felt like it would be really interesting to have a more genteel version. And also, to remember that while Birdy sees her parents as these controlling elders, in the reality of the Middle Ages, they would be really young. So, what would it look like for them to actually just be young, cool, attractive people?”

When our spirited teen heroine learns of her rock ’n’ roll parents’ plans to marry her off to a wealthy man in exchange for money and land, she decides to do anything and everything she can to put even the most vile of her suitors off. But how will her mother and father respond to her behaviour?

Only time will tell…

Is there a trailer for Catherine Called Birdy?

The trailer for Catherine Called Birdy is generating a fair bit of traction on social media, and it expertly sums up the warmth and wit of this coming-of-age drama.

Watch it for yourself below:

It’s serving us similar vibes to Netflix’s Enola Holmes, but with far more swordplay and medieval trappings – not to mention Dunham’s tongue-in-cheek style.

Which means that, yes, we’re into it. In a very big way.

Who stars in Catherine Called Birdy?

When we say this film boasts a brilliant cast, we aren’t joking. The phenomenally talented Bella Ramsey – aka Lyanna Mormont of Game Of Thrones fame – is excellent as the eponymous Birdy, while the one and only Billie Piper stars as her on-screen mother.

As if that weren’t enough to whet your appetite, Fleabag’s Andrew ‘Hot Priest’ Scott takes on the challenge of playing Birdy’s unscrupulous father. And he wears a pretty fabulous pearl choker as he does so, too.

Andrew Scott’s best TV roles, from The Pursuit Of Love to Sherlock

As Dunham explains to The Hollywood Reporter: “[It’s] a freaking pearl choker! I don’t know how I ended up living my fantasy of putting Andrew Scott in a pearl choker, but it happened.

“If someone is like, ‘Hot priest is in your movie.’ Then [I’ll be] like, ‘Now he’s hot medieval dad.’ If anyone steps away from this just with like a screen grab of Andrew Scott in a pearl choker, that’s all I can offer.”

Catherine Called Ramsey promises to serve up a YA drama unlike any other.

Throw in the combined talents of Lesley Sharp, Sophie Okonedo, Joe Alwyn, Isis Hainsworth, Dean-Charles Chapman and Paul Kaye, and you truly have a cast to die for.

What are people saying about Catherine Called Birdy?

The film opened to largely positive reviews at the Toronto International Film Festival earlier this month – and Dunham believes that’s largely because her project helps to “remind [viewers] of the richness of who you used to imagine yourself to be, and who you can still imagine yourself to be”.

As she tells The Hollywood Reporter, Catherine Called Birdy “speaks to the fact that the cycle of suppressing women continues now and we have to keep fighting – case in point Roe v Wade”.

“Women are consistently having to re-explain and reassert their independence and their autonomy,” says Dunham.

“It’s something all marginalised people have to do. And that was the impetus for [this movie’s] final shot.”

When and where can I watch Catherine Called Birdy?

If you prefer your films on the big screen, Catherine Called Birdy will enjoy a limited release in cinemas this Friday 23 September.

Otherwise, it will drop on Amazon Prime Video on 7 October. Will you be watching?