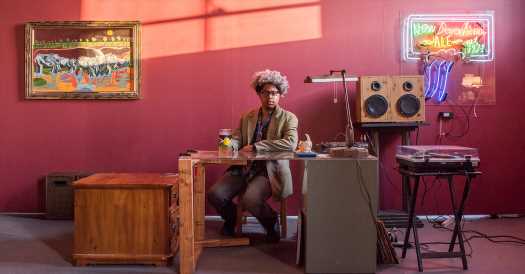 In January 2020, an M.T.A. bus driver named Tyrone Hampton found a nonverbal child still sitting onboard at the end of a run in Upper Manhattan. He called for help and watched over the boy until he knew he’d get safely home.

It was a small news story, with a happy ending. But it was the kind of incident that touches Azikiwe Mohammed, 37, an artist who, through different media — painting, textiles, performative installations — is interested in constructing spaces of safety and welcome for people of color and for immigrants whose space is often threatened.

“I have a bunch of alerts set for when people don’t make it home,” Mohammed said in an interview at the Yeh Art Gallery at St. John’s University in Jamaica, Queens, where the first exhibition devoted to his textile-based art is concluding soon. One of the 40 pieces in the show is a tribute to Hampton, whose portrait he has stitched onto a vintage denim jacket.

It is just another entry in Mohammed’s visual universe, a realm devoted to everyday heroes and small acts of care.

“Home has always been a difficult idea for Black and brown folk,” Mohammed said, citing issues of discrimination, displacement, and invasive policing, as in the death of Breonna Taylor. “I just want better things for our people.” 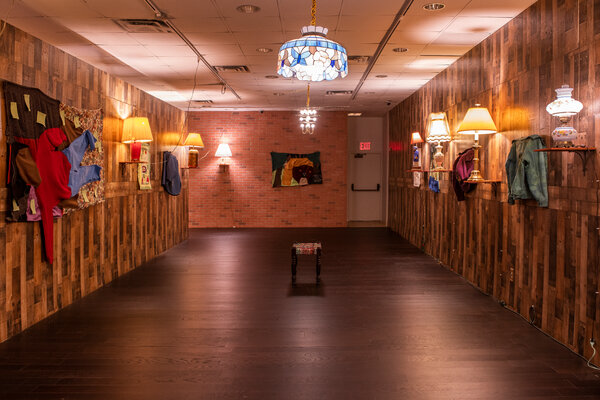 Mohammed’s art has been exhibited commercially, including a solo show of paintings in early 2020 at Anna Zorina Gallery in Chelsea. But he dislikes the art world and its hierarchies, he said, preferring to call himself “a guy that makes stuff.” His exhibitions turn galleries into homey spaces intended to put all visitors at ease.

At the Yeh, Mohammed transformed the gallery’s plain interior with wood flooring and laminated walls into a country cabin or den, with vintage lamps beside each hanging piece.

His textile art begins with items he finds in thrift stores, which he then cuts, combines or adorns. Some quilt-like works depict Black people at rest, relaxing in a park. Other pieces start with vintage apparel, to which he adds imagery or text invoking figures from daily life, like the bus driver, or America’s fraught racial history: Black churches attacked by arsonists, and Black beaches where people found safe recreation during segregation.

Several works made for the Yeh show contain Queens references like the Unisphere, or obscure entries in the oral-history Queens Memory Project. Mohammed is not from the borough — his mother, a New York City public school educator, is from Harlem, his father, a photographer and substance-abuse counselor, was from Brooklyn, and he lives in the apartment complex in TriBeCa where he grew up — but Queens, a magnet for migrants, is also his kind of place.

“Azikiwe is the perfect artist to work in Queens,” said Owen Duffy, the Yeh Art Gallery’s director, who curated the show. “He has the gift of enfolding the stories of people from many different backgrounds into his work.”

If some artists are world-builders, Mohammed is a homemaker who blurs the lines of art practice in search of something more grounded, something we maybe knew all along.

“He was always in his own brilliant universe,” said the filmmaker Garrett Bradley, a friend since childhood, whose projects are currently in the New Museum’s “Grief and Grievance” show and in contention for an Oscar. Mohammed’s work evoked a reality that “is rooted in a place that is nostalgic, familial, and deeply intimate,” she said.

“He is a prophet and a griot,” said the curator Storm Janse van Rensburg, who organized Mohammed’s 2019 exhibition at the SCAD Museum of Art in Savannah, Ga. “He has created a mirror-universe for the narratives, experiences and futures of people of color.”

Costumed as the friendly proprietor, the artist sells doodads and small artworks, and invites visitors to write on postcards what material or emotional resources they would like from New Davonhaime that they are not getting from the United States. (An iteration at the Knockdown Center in Queens in 2017 included a music exchange and New Davonhaime Ale at the bar.)

Each year, Mohammed takes two months to travel the country, always by bus, looking for New Davonhaime wherever it manifests. When he reaches a new city, his method kicks in. “Generally, I go to a thrift store, a pawnshop and a used record store,” he said. “From the three of those I can get a loose idea of a town. Then I go find a bar.” He returns with stories, and stuff.

He frequents New York-region thrift shops, as well, and “stores that don’t bother having a name, or the dude who has a garage that’s open every Saturday.”

For Mohammed, the mission is more than art. A longtime educator, notably at the Church Street School for Music and Art in TriBeCa, he is now preparing to open his own Black Painters Academy, where students of all levels can learn to paint, in a second-floor space on Eldridge Street at the edge of Chinatown and the Lower East Side. Its tagline on Instagram is, “Our classes are free because we pay enough already.”

The aim, he said, is to “say yes to people who have been said no to” and who cannot afford art classes otherwise. “What’s a $50 class when you’ve only got $30 for the week?” He will run the school, he said, so long as a Kickstarter campaign and assorted donations allow, teaching the classes himself along with guest artists.

Its locale has served as a distribution hub for the New Davonhaime Food Bank, in response to the pandemic — a very real venture in which Mohammed raises money and delivers food supplies to people in need.

He encourages arts groups to pitch in and back their social justice statements. “Arts organizations are trying to brown it up, so let’s take that money and put it where it’s supposed to be,” he said. “So that people get to eat — like, actually eat.”