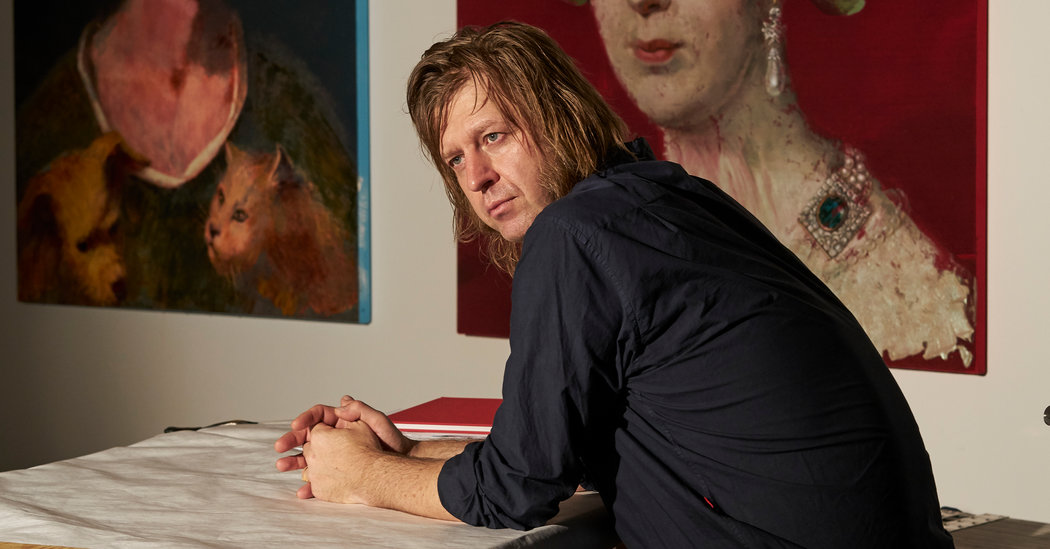 For someone who has ricocheted from one medium to another long before it was fashionable — installations, photography, collages, performances, films — the Polish-American artist Piotr Uklanski sure has a lot of different kinds of paintbrushes in his Greenpoint, Brooklyn, studio.

Ranging from a wide wallpaper brush to tiny-bristled detailers, they seemed to signal that for his new series, “Ottomania,” he is taking the most traditional art form quite seriously. His new paintings remake, with much creative leeway, Orientalist pictures from the past.

But lest he seem too serious, he got to the heart of the matter right away. The big question was, “How much of a wink to include?” For starters, most of his “Ottomania” works are painted on velvet, a background better known for pictures of Elvis found on motel walls.

Mr. Uklanski, 50, has been something of an art world bad boy, bringing a dark-humored, ironic touch to varied projects, including a Polish spaghetti western film he wrote and directed in 2009, “Summer Love,” that starred Val Kilmer as a slumped-over corpse. Before that, in 2003, there was his two-page photograph in Artforum featuring the bare derrière of his girlfriend (and now wife) Alison Gingeras. A former curator at Centre Pompidou, Ms. Gingeras wrote that the image tried to “confront the projection of taboo.”

Now, with his new series of portraits at the Istanbul Biennial and at Luxembourg & Dayan gallery in Manhattan (through Oct. 29), the artist is again tackling a Conceptual project that may raise eyebrows.

A trip to his native Poland brought him to museums where he saw old master paintings of the late 1500s, “with men dressed up as Ottomans,” he recalled. That planted the seed of a project: He would do his own versions of existing Orientalist portraits.

His “Ottomania” works include a masked and bejeweled Amalie of Württemberg, the Duchess of Saxe-Altenburg, which Mr. Uklanski based on a 19th-century work by Ludwig Doell. Another portrait, “Untitled (Lukasz Trzcinski),” depicts a mustachioed 17th-century Polish nobleman wearing fur trim. In addition to inspiration from old masters, he included more recent sources: “Untitled (Tamara de Lempicka)” is a portrait of the Polish Art Deco painter.

The common thread is Turkish garb, including turbans and robes, which had been appropriated by the original painters. Mr. Uklanski, who has always relied on the push-pull of contradictory forces in his work, said that his own paintings functioned as both “critical tool and homage.”

“I have a long history of appropriation in my practice, and reinventing it in my own way,” he added.

Recently, old pictures of Prime Minister Justin Trudeau of Canada wearing a turban at an “Arabian Nights”-themed party, with darkened face, neck and hands, have surfaced, amid charges of cultural insensitivity.

And as far back as 1978, Edward Said, the Columbia University scholar, critic and author, criticized what he considered patronizing representations of the East in his landmark book, “Orientalism.” Said defined Orientalism as a romanticized view of Arabic culture by French, British and, later, American writers to create a narrative of an exotic land.

In some ways, Mr. Uklanski said, the new works were his response to Said’s critiques.

“Maybe it was a cultural appropriation,” Mr. Uklanski mused about the early works, “but many of the painters didn’t travel anywhere, they were fantasizing.” By donning Ottoman garb, he added, “Maybe they were actually trying to find a common denominator.”

At his studio in Greenpoint, a neighborhood he chose partly for its longtime Polish character, the artist said that his own heritage is at the core of “Ottomania.”

Since the 15th century, Mr. Uklanski said, Poland and its predecessor states had close relations with the Ottoman Empire; the Polish national costume, he added, has Turkish roots. “Poles sought Ottomanic traditions to bolster their own identity,” he said. The affinity lasted hundreds of years, though interrupted by war along the way.

The artist, who has a mop of unruly hair that transitions into mutton-chop sideburns, said the series came about after his 2015 photography show at the Metropolitan Museum of Art, “Piotr Uklanski: Fatal Attraction.” That two-part show featured his own work, as well as selections he edited from the museum’s collection, presaging his interest in older art and traditional methods. 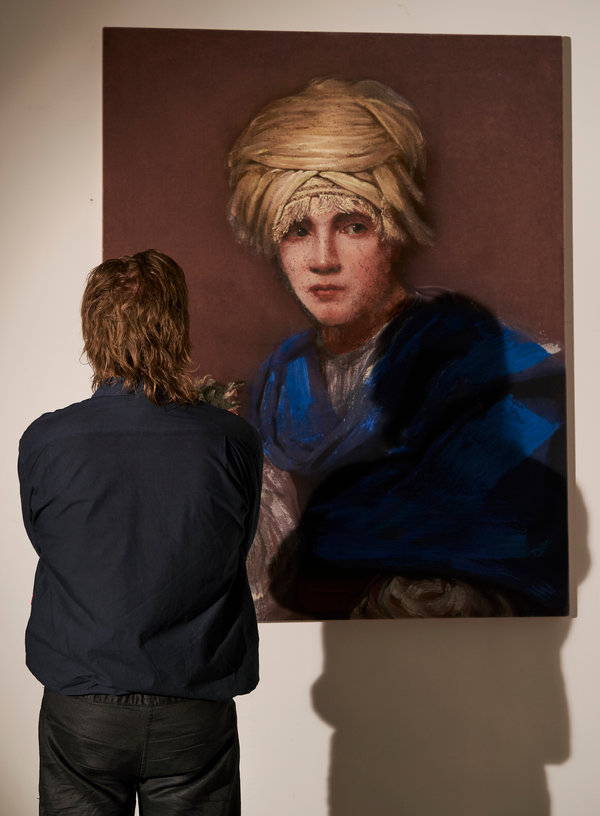 Of the inspirations he found for “Ottomania,” he explained, “Some are beautiful, and some of them are quite weird.”

“They’re a little trashier than the originals,” he admitted. “All my work involves using something that the high discourse rejects.”

Nicolas Bourriaud, the curator of the Istanbul Biennial, said that “the layered quality of ‘Ottomania’” suits the biennial because of the city’s traditional role as gateway between East and West. He installed 11 of Mr. Uklanski’s pictures at the Pera Museum, which focuses on Orientalist art.

“The whole building will be dominated by the idea of fiction, a civilization that never existed,” Mr. Bourriaud said.

Mr. Uklanski has never minded a little controversy during his shifts among various media. One of his signature photographic works was “The Nazis,” in 1998, a grid of 164 head shots of actors portraying Nazis on film.

At the time of its debut, Mr. Uklanski responded to an outcry by defending the piece, but he says now, “The project feels a little dated.”

Douglas Eklund, the Met photography curator who organized “Fatal Attraction,” said the artist was “criminally under-known” because he has “different modes and frames of reference.” The New York investor David Shuman, who owns more than a dozen works by Mr. Uklanski, said that he prizes the lack of a signature style.

“Visually, I just love the ‘Ottomania’ pictures,’” Mr. Shuman said. “If you put those pictures in front of a dozen art collectors, they won’t be able to guess who the artist is.”

Ms. Gingeras, the artist’s wife, said in an email that at the start of the “Ottomania,” Mr. Uklanski was somewhat inhibited. “He sees himself foremost as a conceptual artist,” she said. But she added that she relished that instead of keeping an ironic distance from painting, he let himself go and indulged in his “hand.”

Indeed, viewers may see that in the delicate modeling of the blue robe worn by a boy depicted in “Untitled (Eastern Promises V),” at Luxembourg & Dayan, which he had in front of him in the studio.

Mr. Uklanski said a curator once called him “a painter who was running away from the brush,” noting that he was now returning to a medium he worked in more frequently 30 years ago. On this project, he added, “There’s some attention to detail, a little bit of the quest for perfection.” 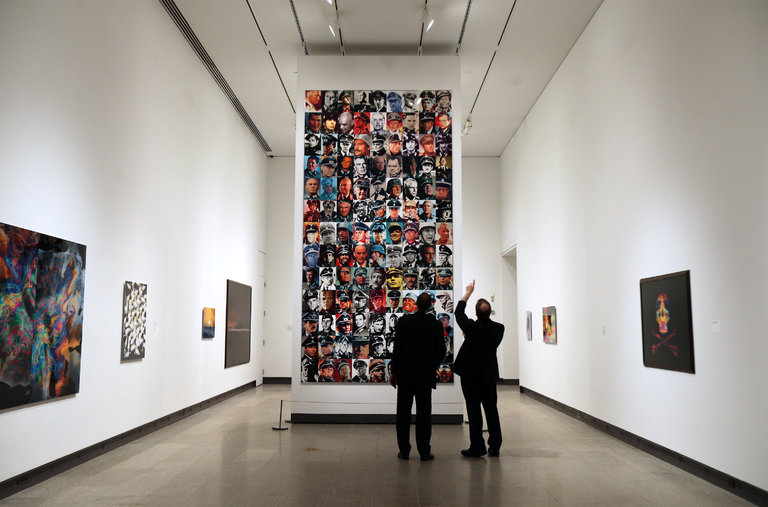 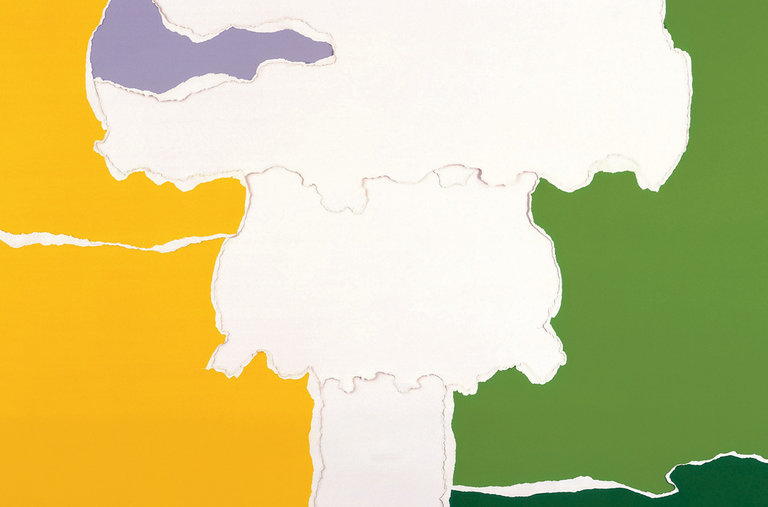