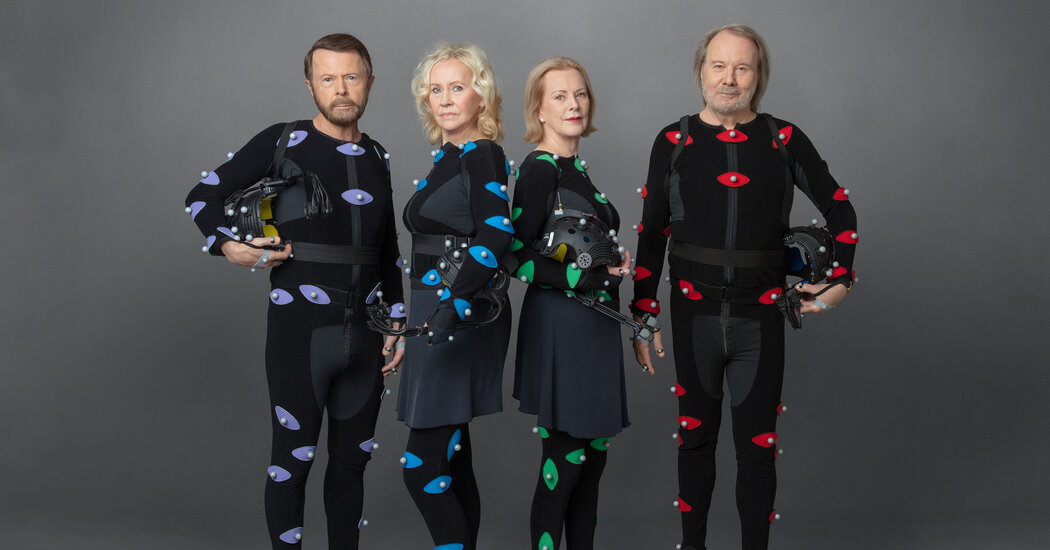 Every Friday, pop critics for The New York Times weigh in on the week’s most notable new songs and videos. Just want the music? Listen to the Playlist on Spotify here (or find our profile: nytimes). Like what you hear? Let us know at [email protected] and sign up for our Louder newsletter, a once-a-week blast of our pop music coverage.

Before Max Martin’s hit factory ruled radio playlists, another Swedish pop phenomenon had its run: Abba, which is reuniting after nearly 40 years. A new album, “Voyage,” is due on Nov. 5 and quasi-concert dates are scheduled in London in May; the singers will be digitized images backed by a live band. Though the verses of “Don’t Shut It Down” are about a woman surprising an ex with her return, the choruses also recognize the strangeness of Abba’s reappearance: “I’m not the one you know/I’m now and then combined,” Agnetha Fältskog and Anni-Frid Lyngstad sing, backed and produced by Björn Ulvaeus and Benny Andersson. “And I’m asking you to have an open mind.” Meanwhile, the music reclaims familiar ground: a strutting march with gleaming orchestration and scrubbing disco guitars, stolid and earnestly tuneful. JON PARELES

Charli XCX oscillates between big-gesture pop and artier impulses, but “Good Ones” swings the pendulum back to pop. It’s produced by Oscar Holter, from the Max Martin stable that also concocted the Weeknd’s “Blinding Lights,” and it looks back directly to the 8th-note synthesizers of the Eurythmics’ “Sweet Dreams (Are Made of This).” Hopping between registers, Charli XCX indicts herself — “I always let the good ones go” — neatly and decisively. PARELES

Everything is rhythm in “Love Me”: the shakers and hand drums, the squiggles of electric guitar, the overlapping call-and-response of the blithely syncopated Nigerian singer Niniola and a saxophone that eventually claims the last word. Juls, a Ghanaian-British producer, neatly balances 1970s Afrobeat, the hand-played, steady-state funk perfected by Fela Anikulapo Kuti, with the multitrack transparency of 20th-century Afrobeats. Even after the song erupts midway through, the groove keeps its sly composure. PARELES

Sonically rich, big-tent-pop ambitious, soulful house music from Fred again.., a singer and songwriter who has worked with Ed Sheeran and Stormzy, was mentored by Brian Eno and has a soft spot for bright dance music that’s almost physically cheerful. JON CARAMANICA

On “Linda,” Rosalía — a white European woman who has dominated Spanish-language pop over the last few years — turns to the Dominican musician Tokischa and dembow for street cred. Tokischa is the genre’s resident insurgent, an iconoclast who makes government officials, homophobes and upper-class puritans clutch their pearls. It’s no surprise that “Linda” runs like a sexed-up playground chant; over a dembow-flamenco concoction, the two stars trill, “Nos besamo’, pero somo’ homie’” (“We kiss each other, but we’re homies”). This is the kind of song that sparks necessary reflection about race, power and collaboration — conversations about who these cross-cultural team-ups are designed to make rich, and who, if anyone, they intend to liberate. ISABELIA HERRERA

Bobby Shmurda’s first post-prison song — seven years after his breakout single “Hot ___” made him a star — feels like burning off excess energy. This six-minute freestyle is a workout; it’s delivered with a doggedness reminiscent of the fervor of Meek Mill, but leaves little room to breathe. The stakes here are purposely low. Releasing a song like this — no chorus, intense rhymes, cluttered flow — lightens the pressure that would come with seeking to score another hit as massive as his first. For now, he just wants to rhyme. CARAMANICA

All cool grooves and saccharine strings, Martox’s “Pausa” is best enjoyed with a spiked seltzer. The Dominican duo, alongside the producer and vocalist Gian Rojas, collage disco grooves and syncopated bass lines into a prismatic beachfront boogie. HERRERA

The penultimate track on Jhay Cortez’s new album, “Timelezz,” exemplifies a small rebellion happening in Spanish-language pop. At times, the production is aquatic; at others, its twinkling synths resemble a midnight drive through the streets of the Japanese capital. With a thumping four-on-the-floor rhythm, the track is another sign that reggaeton’s major players are embracing the textures of house music, and stretching the genre’s boundaries beyond the realm of stale pop. HERRERA

In “Glider,” a song she wrote for the video game Sable, keyboard patterns enfold Michelle Zauner, the singer, musician and producer who records as Japanese Breakfast. There’s wonderment in her voice as she sings about an excursion into the unknown: “It feels like everything is moving/Around me.” The keyboards start out plinking like music boxes, soon to be joined by sustained, cascading chords, an ever-thickening structure that can’t constrain her delight. PARELES

In a live-streamed home performance last year, the virtuoso folk singer Aoife O’Donovan played the 10 songs on Bruce Springsteen’s “Nebraska,” front to back. She accompanied herself alone on acoustic guitar, as Springsteen had on the original album in the early 1980s, but that’s about where the similarity ends. The original album was desperate and dark, with doubt coursing through its tracks like murky blood; O’Donovan treats them as canon, saluting Springsteen’s songcraft with clear, pitch-perfect articulation and affable delivery. The approach is suited best to “Reason to Believe,” the finale, a Springsteen classic that contemplates the mysterious pull of resilience. GIOVANNI RUSSONELLO

Ruby Landen’s blend of Celtic-tinged acoustic-guitar fingerpicking and bowed strings — cello and fiddle — echoes the introspection of songwriters like Nick Drake. But she has her own story to tell, with an unassuming but pointed voice, in songs like “Pt. 1.” It’s an anatomy of a failed relationship — “Was it the safety of my presence that made you come undone?” — that she relays patiently and quietly. Then she segues into a modal, accelerating instrumental coda, picking behind fiddle and steel guitar, that needs no words to capture the underlying pain. PARELES

On drums, Nate Smith is in the business of inspiriting. Far from flashy, he’s an ebullient technician who keys into the subtleties of his bandmates’ playing and laces joie de vivre into his own. Smith, 46, just released “Altitude,” a breezy original and the latest single from a forthcoming album, “Kinfolk 2: See the Birds.” His band, Kinfolk, is joined here by a pair of young and prodigious improvisers: the vibraphonist Joel Ross and the vocalist Michael Mayo. The music video captures the group recording the song in the studio, just before the coronavirus pandemic struck; when Mayo digs into a short scat solo, improvising flawlessly in little rhythmic zags in the lower register and high-flying longer notes, you can see — and hear — him passing inspiration back and forth with the drummer. RUSSONELLO