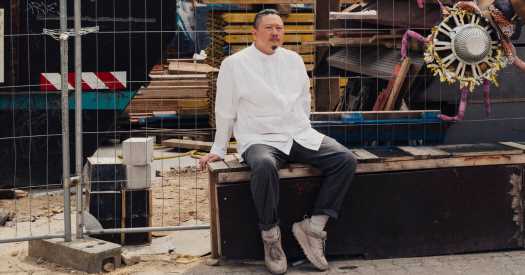 BERLIN — In a scene from his video installation “The Wanderer,” the artist Choy Ka Fai, having traveled thousands of miles to a spiritual gathering near the city of Ulan-Ude in Siberia, kneels at the feet of a shaman, his head lowered, eyes closed. An assistant to the shaman introduces Choy.

“He is from Singapore,” the assistant says. “He is a supernatural dance explorer.”

That title is one that Choy, who lives and works in Berlin, has taken on while developing “CosmicWander: Expedition,” an ambitious, immersive exhibition that grew out of his research on shamanic dance practices across Asia. First presented by the Singapore Art Museum, where it opened in January, the exhibition is on view at KINDL Center for Contemporary Art in Berlin, through Aug. 22, as part of the city’s annual Tanz im August festival.

At the center of a large gallery, displayed on six screens, “The Wanderer” encircles a vibrating, pink-carpeted platform where viewers sit. Its five chapters correspond to the five countries that Choy visited over 18 months: Taiwan, Vietnam, Russia (Siberia), Singapore and Indonesia.

Opening with a 3-D game prototype inspired by his time in Taiwan — where he joined a nine-day pilgrimage for the Taoist sea goddess Mazu — the 42-minute work then shifts into documentation of spirit-channeling rituals, with text providing some insight into their complex histories. Among other video and costume pieces, the exhibition includes interviews with religious practitioners from “The Wanderer,” on topics like how some became shamans and what they do for day jobs. (One is a chef, another a tour guide.)

Trained as a video artist, with a master’s degree in design interaction from the Royal College of Art in London, Choy, 42, often examines relationships between technology and the body. His work, which can have a satirical edge, has appeared at Sadler’s Wells in London, ImPulsTanz in Vienna and past editions of Tanz im August. This year he is part of a scaled-back version of the Berlin festival, which has a mix of indoor, outdoor, live and online events: an effort to stay flexible at a precarious time for live performance.

“That hybrid was very important to us,” said Andrea Niederbuchner, a curator and producer for Tanz im August. “We really wanted to do something which we would not have to cancel.” If all goes as planned, Choy’s “Postcolonial Spirits,” a stage work exploring the Indonesian trance-dance form dolalak, will have its premiere on Thursday at the HAU Hebbel am Ufer theater.

“CosmicWander” is not the first project to take Choy across Asia; for “SoftMachine” (2015), he interviewed more than 80 independent dance artists in five Asian countries. In our recent interview, he spoke candidly about his position as both an insider — “an Asian going into Asia,” he said — and an outsider, sometimes regarded with skepticism. Last year, a work he presented at the Taipei Arts Festival, under the “CosmicWander” umbrella, drew accusations of cultural appropriation.

“This is the eternal anthropological question,” said Tang Fu Kuen, the artistic director of the Taipei festival, who is also from Singapore and works with Choy as a dramaturge. “How can an outsider enter a foreign culture and see it from fresh eyes, different perspectives?”

“He is not exploitative as people think,” Tang added. “They think, ‘Ah, he is just going around, entering different countries, taking away from the culture.’” But as Tang sees it, Choy’s work is more about honoring and learning from those he meets. “It is always tempered with his own understanding, while respectful and faithful to the voices that he encounters.”

Before the opening of “CosmicWander” at KINDL, Choy took a break from installing the show to talk about his path as an artist and where his wandering has led him. These are edited excerpts from the conversation.

What first drew you to dance and working with the body?

I studied video in art school and went on to make theater performance, collaborating a lot with dancers and musicians. I got more and more drawn into dance, because I always find language a problem. Though it’s ironic because in the last 10 years of my dance work, there is a lot of talking.

But how it really started was when I went to London to study design in 2010. I removed myself from my comfort zone and everyone I was working with. At that time, I was playing with muscle sensors, and I just had myself, my laptop and some sensors. I became like a bedroom D.I.Y. scientist, electrocuting myself, trying to stimulate muscle movement.

You call yourself a self-exiled artist. Why did you leave Singapore?

I was exhausted because of the infrastructure there. To meet certain grant requirements, I had to produce and produce. There was no time to reflect. I left to get more head room.

Your work “SoftMachine” focused on independent dance artists in Asia. What led you from there to shamanic dances?

It started with a piece called “Dance Clinic” in 2017. I was working in West Papua [on the island of New Guinea] with a folk dancer who was training in contemporary dance. I was playing with this brain-wave sensor, and I had this question of what happens to the brain wave when you go into a trance, when the body gets possessed or enters a heightened state of consciousness.

I started to wonder, if I put this motion-capture sensor on a shaman, and the god comes into the body as he is doing this dance ritual — if I capture this digitally, does that mean I capture the dance of god? This was basically the opening line on my proposal for “CosmicWander”: What would happen if I could digitize this intangible godly presence? It expanded out from there.

One of the rituals you attended for “CosmicWander” took place in Singapore. Did you learn anything new about your own country?

In Singapore I saw this hybrid between Chinese and Indian shamanism, Taoist and Hindu. The nuances are so interesting. Like, you can actually put this Indian garland of flowers on a Chinese god. When I saw this, I was like: Why are artists in Singapore so afraid to express themselves? These shamans are expressing freely whatever is possible.

I came out with the theory that religious practitioners in Singapore are more liberated than artists. Because artists worry about censorship, or self-censorship. The arts in Singapore are heavily state-subsidized; a lot of artists survive based on state funding.

Do you mean they’re afraid to criticize —

They are afraid they’ll lose their funding if they take a wrong step. But no one knows where the boundary is. There are instances, if the government or [arts] council thinks your art is having a negative influence on the people of Singapore, they will stop your taxpayer-money funding.

Are you a religious person yourself?

I’m Christian. I believe in Jesus. But I stopped going to church. That’s another story.

Something a little bit more personal: Before I went walking with the goddess of the sea [in Taiwan], I was in a not-so-good mental state.

What was going on?

It was the lowest point of my personal life. I had just separated from my partner. We were together almost four years. That moment made me disbelieve in all the things I used to believe in.

I was already doing all the research [for “CosmicWander”]. Then this happened, and I wasn’t sure if I should continue becoming an artist. Then I was like, “I got the funding, so I will go and walk with the god.” I picked myself up for that. And the experience was mentally and physically quite transformative.

Has making “CosmicWander” restored your faith in being an artist?

It restored my belief that there are many wonderful things in life that I have yet to experience. I think that is a simple way to put it.