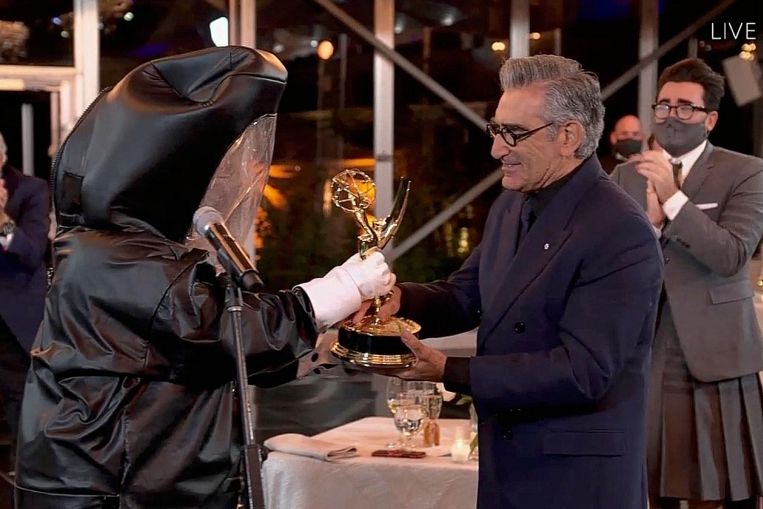 At the 2020 Emmy Awards, it was time for a show that never received much recognition to shine.

“The Internet is gonna turn on me,” said a sheepish Schitt’s Creek co-creator and actor Dan Levy as he took one of the seven Primetime Emmys in total that the Canadian sitcom won (from 15 nominations; the show also won two Creative Arts Emmys) on Sunday night in Los Angeles (yesterday morning Singapore time). This is the most number of Emmy wins in a single season for a comedy series.

Not bad for a show that only began showing up on the Emmy radar after its fifth season last year, when it garnered four nominations and no wins.

The sweep was not quite an upset as the final season earned praise from critics and was strongly tipped to be a big winner in a turbulent year that many felt needed a show that was sunny and accepting of diversity.

Also, since its debut on American Netflix in 2017, it had built a fan base that the Emmy voters, who in the past have leaned towards prestige comedies such as Amazon Prime Video’s The Marvelous Mrs Maisel, could not afford to ignore.

A bigger surprise was the comeback of cable giant HBO.

The streaming service Netflix swaggered into Emmy season with 160 nominations, giving it the biggest lead it has ever enjoyed against traditional Emmy powerhouse HBO, with its 107 nods.

Including its Creative Arts wins, HBO has 30 Emmys versus Netflix’s 21, putting them at No. 1 and No. 2 positions respectively in the studio rankings.

HBO received a boost to the top, thanks in part to the shock win by Zendaya in the Outstanding Lead Actress in a Drama Series category for Euphoria – an honour now trending on social media.

Zendaya, who plays Rue in the series that gained controversy for addressing issues such as sex and drugs among high schoolers, is also among the record number of black performers winning Emmys this year.

In what is being hailed as a breakthrough for diverse casting, a record 11 black performers have won awards at the Creative Arts and Primetime Emmys.

Actress in a Limited Series for Watchmen) and RuPaul (Outstanding Reality Series).