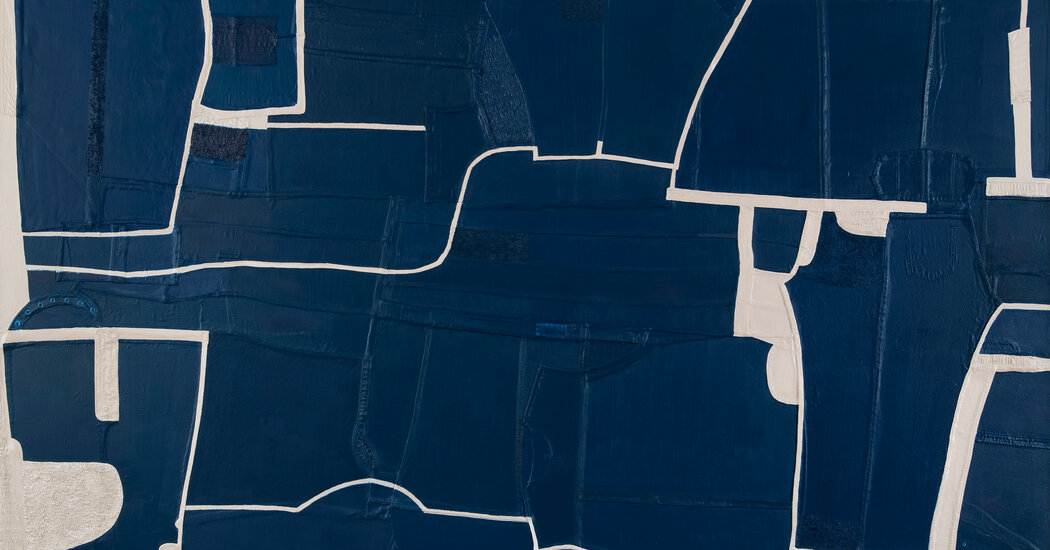 About five years ago, Medrie MacPhee began to rethink her paintings. She jettisoned her swirling, unstable compositions, whose tangled forms, derived from architecture, often hung, Surrealist style, in empty space. She found, as many painters do as they mature, that she could do more with less. She started collaging parts of cutup garments to her canvases, fitting them together like puzzles, letting their welted seams define taut shapes that now extend edge to edge. She replaced a familiar illusionism with an adamant, witty physicality. In so doing, she dramatically improved her work and took ownership of it.

Four new canvases form “Words Fail Me,” MacPhee’s impressive second solo show with Tibor de Nagy. They are powerfully flat, more literal than abstract. Their compartments of color are alternately solid, slightly brushy or wiped down to a pale transparency. The familiar details function formally while providing little shocks of recognition: not only seams, but also belt loops, waistbands and the occasional zipper or pocket. In “Favela,” belt-looped waistbands painted white divide blocks of red and brown; they are placed vertically, like ladders, which evoke the title and MacPhee’s affection for architecture. In the majestic “Take Me to the River,” the entire surface is a deep oceanic blue and the dividing seams are picked out in white. It suggests a sparsely lighted terrain seen at night, from above. But plenty of seams are left lurking in the blue, creating a ghostly infrastructure whose depths have a horizontal pull — perhaps out to sea. ROBERTA SMITH 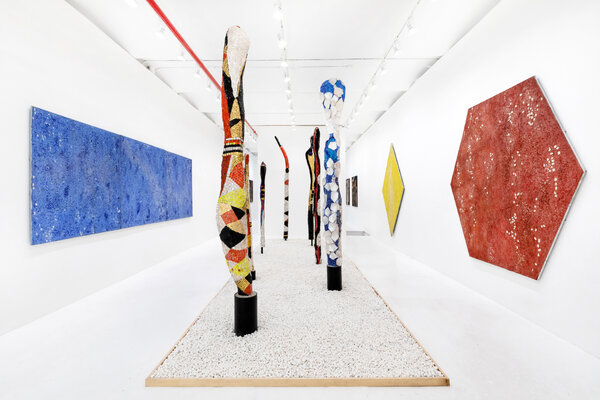 Raised in and around New York by French parents, Jeanne Reynal (1903-83) spent most of the 1930s apprenticed to a Russian mosaicist in Paris. She came back with strong opinions: Mosaic was neither painting nor sculpture, she wrote in a 1964 monograph, and Renaissance artists had “taken an ax” to the ancient art form by laying their tiles flush instead of letting them protrude to catch the light.

Policing genre boundaries no longer seems so important. But the strongest pieces in this show, titled “Mosaic Is Light: Work by Jeanne Reynal, 1940-1970,” derive much of their considerable impact from their disconcerting perch between painting and sculpture.

“Ogo,” a cement-on-board panel just over 4 feet by 5 feet, is a busy abstract whorl of reds, grays and blacks. As a painting, it would be overwrought. But the variety of its textures — the pits, the streaks, the unexpected glitters as you shift from foot to foot — draw your attention away from the composition and, in a way, counterbalance it. Three 1959 monochromes — a flat red hexagon, an enormous yellow diamond, and a triptych of blue squares, all of them strewn with broken glass and mother-of-pearl — go further, wringing so much action out of a broken surface that the very notion of a flat one comes to seem absurd.

Seven elegant monoliths that Reynal made in the early ’70s after a trip to Africa do something like the opposite. Covered with red, black and gold tiles so shiny they’re almost reflective, and studded, in one case, with palm-size pieces of mother-of-pearl, their surfaces dazzle, letting their sinuous shapes slip right behind your eyes. WILL HEINRICH

Angela Dufresne’s paintings feel as if they’re in motion. Her strokes, squiggles and streaks of color hold together enough to create recognizable forms, but also often look like they might rearrange themselves at any moment. This is especially true of her large portraits of the actress Gena Rowlands, one of which beckons from the farthest wall of the gallery. Her blue eyes are set in a look of knowing resignation, but the kinetic dance of the rest of her face suggests a woman whose emotions are ever mutable.

Borrowing from the language of film, the exhibition is titled “Long and Short Shots.” The latter category includes a selection of small, scrappy paintings in the vein of what the artist is best known for: bawdy, hazy scenes that mix human and animal, the mythological and scatological, to evoke a funnier, more mysterious and queer reality than our own.

Dufresne renders these scenes in outline atop more free-form painted backgrounds that compete for attention, giving them a spectral quality. Neither dreams nor nightmares, the works seem closer to hallucinations — the teeming, transgressive imaginings of a liberated hand and mind. JILLIAN STEINHAUER

The rough and beautifully wrought objects in Joaquín Orellana’s “The Spine of Music,” at the Americas Society, resemble 20th-century modernist sculptures, but they are much more than this. Orellana, a Guatemala-based composer, calls them “útiles sonoros” or “sound tools,” and these objects, created from metal, wood, bamboo and plastic, can be activated by visitors using mallets and other implements. This is his first show in the United States, and the sound tools are accompanied by paintings, prints and videos by Carlos Amorales, María Adela Díaz, Akira Ikezoe and Alberto Rodríguez Collía.

Orellana, 90, studied classical violin and composition in Guatemala, then embracing the avant-garde work of Arnold Schoenberg and electronic music in Buenos Aires during the 1960s. The sound tools here mimic electronic music, like components in a synthesizer. There are the delicate, clinking sounds of the “Imbaluna” (1984) and the “Sinusoido grande” (1986) and “Sinusoido pequeño” (1996); bowed instruments that emit long, mournful tones; and others that release more violent or disturbing sounds.

If the instruments seem like merely entertaining crossovers between sculpture and sound, they are not. Several mimic tropical, indigenous or West African musical instruments, connecting Guatemala’s pre-Columbian colonial and slavery past with its present. Others nod to weapons or torture devices and the Guatemalan civil war and dictatorship of the last century. Music, Orellana reminds us, is political. “The Spine of Music” offers a different, vaguely utopian model of peaceful no-rules anarchy, participation and silence. MARTHA SCHWENDENER