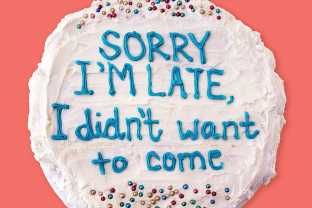 1.Thrown a ringing phone across the room and then fled said room, never to return.

2.Stared at the sea while trying to kill time at an all-day wedding when you don’t know anyone and you’ve just been asked for the seventh time “So what do you do?”

3.Walked into a networking event and immediately backed out slowly, like a hiker trying to placate a bear (….multiple times (per year).

4.Pretended not to speak English when approached in a bar.

5.Faked having swine flu to get out of an assigned role in a school play (and subsequently spent the rest of high school as social pariah, but it was totally worth it).

6.Arrived home after a long party full of noisy strangers and endless small talk and immediately had to lie down alone in a dark room with eyes closed clutching a pillow whispering “Never again” over and over again.

7.Entered every party or social event with a firm exit strategy, plus two back-up plans.

8.Hidden in the bathroom, staring at your phone during that agonizingly long period during weddings between ceremony and the sit-down dinner.

9.Escaped the sixth hour of Christmas Day festivities by feigning a migraine – but you’re secretly in bed reading a Neil Gaiman novel.

10.Protected your date of birth with prison-levels of security so as to avoid the possibility of the whole office awkwardly serenading you, a fate worse than death.

12.Slipped out the back door of a bad party, leaving your coat behind, deciding it’s just collateral because you can buy a new coat, but you can’t buy back your sanity.

13.Feigned sleep in public, once on a bamboo raft to get away from a chatty Floridian who wanted to talk about Bitcoin.

14.Pretended to be too busy to have lunch with your co-workers, but in actuality you’re secretly just eating ramen alone in blissful solitude two doors away.

15.Replayed every conversation in your head after a party before you go to sleep wondering what the hell you were thinking telling that anecdote about the time you got food poisoning on a helicopter.

16.Played dead to get out of team group exercises at summer camp.

17.Signed up for networking events, convinced that THIS time when the event rolls around you’ll be more charming, confident, taller, able to pull off jumpsuits, but end up cancelling on the day so you can rewatch seasons1-3 of Friends while eating frozen pizza on your couch.

18.Escaped a drunk, shout-y bachelorette party by jumping off a boat straight into the sea, screaming “SELF-CARE!!!”

19.Jessica Pan’s book SORRY I’M LATE, I DIDN’T WANT TO COME: One Introvert’s Year of Saying Yes is out now.