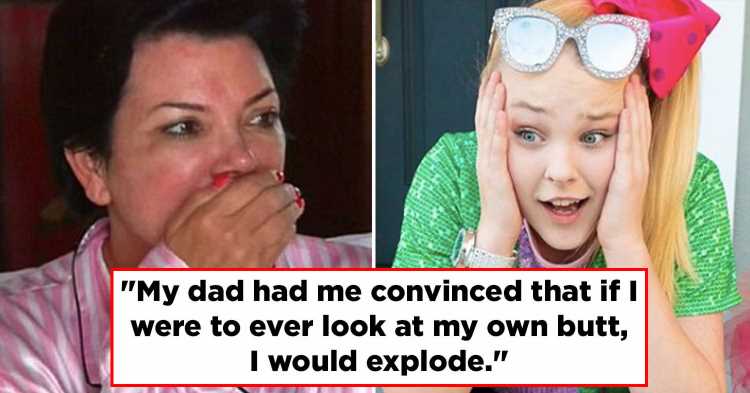 Recently, Redditor u/lphillips5 asked other Reddit users: “What’s something completely false that your parents told you as a child?” Here are some of the cutest, most shocking, and funniest answers!!!

1.“My dad had me convinced that if I were to ever look at my own butt, I would explode.” —u/MysteriousEvidence

4.“I asked my mother why I didn’t have a ‘willy’ like my brother. She told me she picked me up by it when I was a child and it fell off. I cried for about three hours for the penis I never had.” —u/puppetandMaster

5.“My parents told me that when the ‘beehive’ hairstyle was popular, some women ended up dying because black widow spiders would nest in their hair.” —u/Eucatari

6.“I was scared of lightning. Then, my dad told me it’s just god taking pictures of me, so I shouldn’t be afraid. I started running to windows whenever there was a thunderstorm and posing for my picture.” —u/m3ngnificient

7.“When I was a little boy coming out of the bath, my mother would tell me to quickly cover up before a crow swooped in and pecked my penis.” —u/Hill16Army

8.“My dad is terrible at wrapping gifts. Every time he wrapped something to give to us kids, regardless of the time of year, he would say it was wrapped by ‘Rudolph’— the wrapping was terrible because reindeer don’t have thumbs.” —u/gothiclg

10.“As a kid, I used to play with my belly button a lot, so my mom told me that the knot in my belly button held my skin together, and that if I kept playing with it, I’d untie the knot and fall apart. It fucking terrified me, but it worked.” —u/NOODLZ92

11.“My mom, who worked in the chilled section of a supermarket, told me that she had to milk the cows at the back of the shop and bottle the milk before taking it to the shop floor.” —u/cragglerock93

12.“My dad had this light-up skeleton Christmas tree-topper in lieu of an angel. When he took it out of the box, I asked why it was a skeleton. He got this horrified, shocked look on his face and said, ‘Oh no! We must have forgot to poke holes in the box last year!’I thought my angel suffocated and we were putting her dead body on the Christmas tree. I cried for hours.” —u/adawgie

13.“When I was about three, I asked my mom why she didn’t have a penis. She said it fell off because she told a lie. For the rest of my childhood, she could tell when I was lying because I would say something, and then I’d check down there.” —u/anotherkeebler

14.“Migraines were caused by pressure buildup from an inability to fart.” —u/LordVericrat

15.“When I was about six years old, my dad convinced me that turtles grow fur under their shells. Fast forward to the eighth grade — I’m in my U.S history class and the topic of turtles comes up, and I explain to my teacher that turtles do have fur. He then proceeds to turn on the projector and Google ‘do turtles have fur’ in front of the whole class. I’d never been so embarrassed in my life.” —u/Sgt_Spankmywalrus

16.“If you eat too many M&Ms, your tongue will permanently change color.” —u/Gladiolus_Flowers

17.“My dad’s all time favorite snack are Twinkies, and he used to tell me that little elves lived inside the Twinkies, and the three holes existed so they could get outside air and breathe. I never ate another Twinkie in my life, and my dad didn’t have to worry about me stealing his favorite snack ever again.” —u/mountain_wave

Note: Answers have been edited for length and/or clarity.