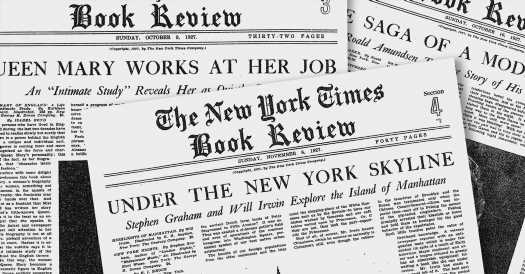 On Oct. 10, 1896, The New York Times announced, “We begin to-day the publication of a Supplement which contains reviews of the new books … ”

What has followed, over the subsequent 125 years, is an evolution of literary journalism — reviews, news, essays and interviews that have shaped the course of American letters. This year, the Book Review is celebrating that history, and together with the editor, Pamela Paul, and the deputy editor, Tina Jordan, I have been unearthing gems from our archive in articles, on our podcast and in a book coming out this fall. This week, an interactive timeline highlights the many moments when history (both humorous and profound) was made in our pages. But what is the history behind this history? How did the Book Review become the Book Review? 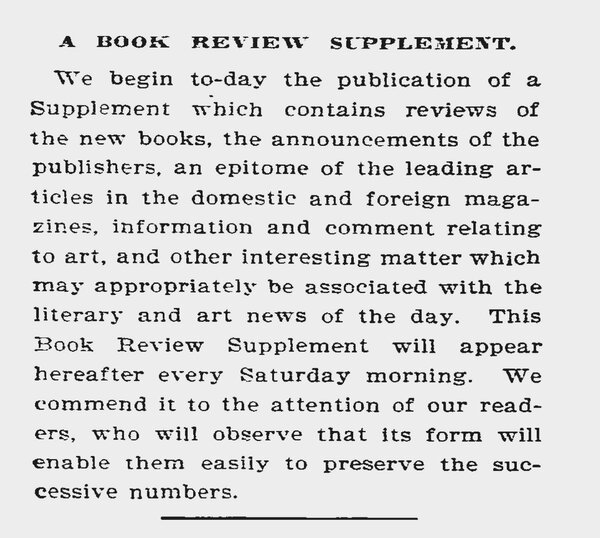 Since The Times began publishing in 1851, book news has been a central component of its report. And no wonder. Francis Brown, the editor of the Book Review from 1949 to 1971, wrote of that early era, “It was the period of Trollope and Dickens and Thackeray, of Whitman, Longfellow, Tennyson and Baudelaire, of Darwin and Huxley, of the Russians Turgenev, Dostoevski and Tolstoy, the Americans Mark Twain, Howells, Henry James.” Word of these great writers spilled throughout the paper, in reviews, features, letters and more.

So it was perhaps no surprise when Adolph S. Ochs chose to gather this coverage into a dedicated book section, establishing the stand-alone supplement shortly after becoming publisher of the paper in 1896. The first edition, then called the Saturday Book Review Supplement, featured 10 unsigned reviews along with lists of new books and an assemblage of literary news, including word of Oscar Wilde’s travails in prison.

In its early days, the Book Review treated books strictly as a form of news. “Literary criticism, an excellent thing in its way, but, properly speaking, a means rather than an end, has never been the chief object of its existence,” the Book Review stated in 1913. “An open forum for the discussion of books from all sane and honest points of view is always accessible in The New York Times Book Review.”

This ethos guided the Book Review through many changes in its early years. In 1911, it was moved to Sundays, in the hopes of attracting more attentive readers. For a two-year period beginning in 1920, the Book Review was wedded to the Sunday Magazine. Shortly thereafter, the use of bylines became standard practice, and Book Review editors began to recruit more outside contributors for their expertise. A world war had come and gone, the Book Review had changed and changed again, but “books as news” remained its guiding philosophy.

Then, in 1925, J. Donald Adams was appointed editor. “When I took over,” he later recalled, “The Times thought that all you had to do was to tell people what was in the books. I wanted to make the Book Review something more than that.” Under his leadership, reviews became more opinionated and coverage expanded. “But there was still something of the blandness of the documentary,” Brown wrote in 1968, “and each succeeding editor had to fight it while the Book Review grew in size — sometimes to 96 pages — and prestige.” Brown seemed intent on fighting that “blandness,” writing that “a well-informed reviewer should not be afraid to praise when praise is due or to attack, maybe demolish, when the nature of a book so determines.”

Brown’s successor, John Leonard — who took the helm of the Book Review in December 1970 — forever changed its approach. At the section’s centennial, the critic and editor John Gross wrote that Leonard’s tenure “signaled a toughening up and a modification of old constraints, from which there could be no going back.” Leonard upended coverage by asking hard questions about what books were reviewed (and why), and by bringing in many new reviewers, many of them women and people of color. The Book Review’s coverage and content broadened and deepened yet again as its style and tone shifted with the arrival of new writers and fresh subjects for consideration.

A similar evolution has taken place in recent years. The world is changing more quickly now than ever before. In 1996, we celebrated 100 years of the Book Review, primarily in print. Chip McGrath, the editor at the time, wrote, “Nothing lasts — except, one hopes, the impulse that compels some people to write books and others to try to spread the news about them.”

Now, 25 years later, we celebrate that impulse across a range of platforms, in an array of mediums — newsletters, social media, our Book Review podcast and more — previously unavailable to us. We’re looking forward to the next 125 years.