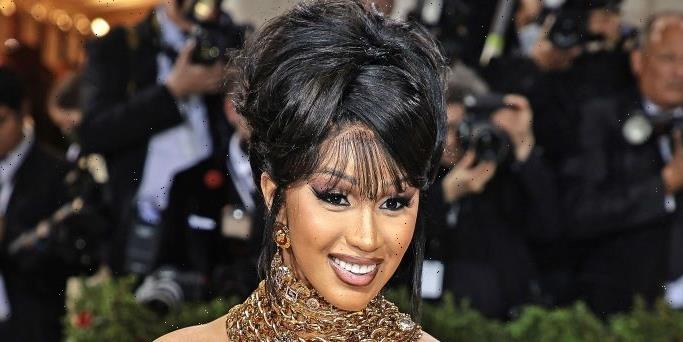 Cardi B may be a chart-topping, Grammy award-winning rapper, but she stans for celebs just like your average celebrity fan. From shouting out You star Penn Badgley on Twitter to meeting Olivia Rodrigo at the Super Bowl, inviting JoJo Siwa over for Christmas, and freaking out when she met Robert Pattinson, Bardi has no problem fangirling over her faves. During a #AskCardi Twitter Q&A on July 1 with her fans, the “Hot Sh*t” rapper confirmed which member of BTS is her absolute favorite.

Twitter user @deviljoonieb asked, “Who’s your bias(favorite) in bts,” and Cardi replied with a picture of Jimin attending this year’s Grammy Awards ceremony.

Cardi’s Twitter shoutout isn’t the first time she opened up about her love for the K-pop idols. Days before she hosted the American Music Awards in November 2021, Cardi B dished to Variety about her daughter Kulture’s love for BTS and how she had to pass up the opportunity to collaborate with the iconic band. “I like BTS a lot, but let me tell you something,” Cardi said. “My daughter likes BTS a lot a lot. Like, ‘Mommy, mommy, put [on] the song.’ And it’s like, I already know what she’s talking about.”

As far as the joint record with BTS, Cardi said, “I was supposed to be on a record with them, but I had just released a record, and then it was going to smash with the time. But I love them.”

OMG? Can you imagine? Don’t mind me; I’ll be over here fantasizing about how much of a bop a potential collaboration between Cardi B and BTS would be. Hopefully, Cardi can make magic happen with the Bangtan Boys once BTS wraps up its temporary hiatus.