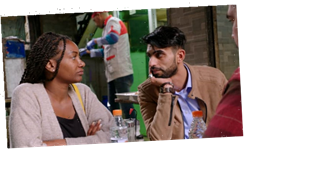 But overall, Yazan continues to be pretty widely liked.

His latest photo, however, has fans reconsidering how they see him.

Others just want him to get help and clean up his act.

We would say that Brittany Banks received a “villain edit” on Season 2 of 90 Day Fiance: The Other Way, but that’s only half of the truth.

The fact of that matter is that our society comes pre-packaged with enough misogyny and racism that it just takes a wink and a nudge by production to turn a young woman into an easy target for viewers.

Yazan, in the meantime, skated by and has continued to be widely loved by fans even though, objectively, his behavior on and off camera was much worse.

That appears to be changing, however.

Whether it’s Yazan becoming too comfortable on Instagram, him not having Brittany to play off of, or fans getting bored of him, he’s getting more criticisms these days.

Specifically, his latest photo has ignited a wildfire of backlash.

Here, we see Yazan’s controversial pic. His beard is full and he looks very much like himself, though some note that he looks a little worn.

But notice what he is holding in his hand so very casually.

“Yazan you need to cleanup buddy,” writes one fan.

Another follower comments: “He needs to lay off drugs.”

But a number of comments were about the distasteful presence of the cigarette.

“All I see is a burnt,” one commenter writes.

“He’s smoking. And smoking is gross,” another correctly describes.

Another follower comments: “It’s against the religion to smoke.”

So, first of all, we have to address that last claim, because it’s complicated.

First, we all know that some people who belong to organized religions that ban things do those things anyway.

Second, technically tobacco use is not addressed in the Qu’ran, but rather in Islamic law built upon the Qu’ran to address other aspects of life.

Smoking is gross, yes, but it looks like commenters perceive that Yazan is up to more than just that.

Much earlier in 2020, Brittany had accused Yazan of enjoying a number of chemical vices.

A growing number of fans are finally beginning to believe her.

Yazan is accustomed to having his posts and looks praised.

Clearly, he did not anticipate the backlash that this one would elicit.

He even temporarily deleted the photo before restoring it. Yeesh, sensitive dude.

What fans are realizing is that much of Yazan’s behavior on camera was a performance, as he was conscious that his extended family would be watching.

According to Brittany, he was well aware of her marital status, but wanted her to pretend to deceive him in order to deceive his grandfather.

Additionally, he had assured her that she would be able to continue to live her life without changing … only to then freak out when she took him at his word.

Why? Because of his super-conservative family, who placed much stricter expectations upon him than the nation or culture of Jordan did.

We can feel sorry for Yazan, because his family clearly messed him up and left him with a lot of emotional baggage.

But at the same time, that doesn’t let him off the hook for the way that he treated Brittany. Also, don’t smoke, dude. Gross.