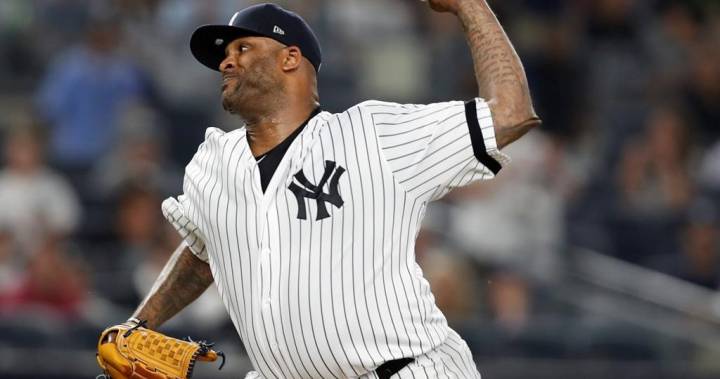 Hicks and Stanton each hit three-run drives, and New York matched the mark set by Alex Rodriguez and the 2002 Texas Rangers.

CC Sabathia (5-4) pitched six innings of two-run ball for his 251st career victory. He threw 104 pitches, his most in a game since 2016, and struck out a season-high nine. The 38-year-old left-hander whiffed Billy McKinney with his final pitch, earning a big roar from the Bronx crowd.

Stanton hit his shot during a seven-run sixth inning for his first homer in a season spoiled by various injuries.

The Yankees batted around during that inning, their fourth time turning over the order in the past week. The blowout came a night after New York ended its eight-game winning streak.

Hicks turned on Sanchez’s fastball in the fifth inning to make it 3-2 with his fifth homer of the season.

Didi Gregorius and Gleyber Torres led off the next inning with consecutive singles, and then the Yankees were off. DJ LeMahieu, who matched a career high with four hits, had a single, Luke Voit had an RBI double and Gregorius singled again before reliever Sean Reid-Foley finally ended the frame with New York up 10-3.

Lourdes Gurriel Jr. hit his 10th homer for Toronto leading off the eighth. Nine of those have come in 29 games since he was recalled from Triple-A Buffalo on May 24.

Gurriel’s shot was the first of five straight hits allowed by Jonathan Holder — the last was a grand slam by Freddy Galvis. The right-hander was pulled after that without getting an out. Gurriel batted again during the five-run inning and struck out on three pitches against Adam Ottavino.

Yankees closer Aroldis Chapman allowed an unearned run during the ninth but got his 22nd save.

Sanchez looked sharp early, especially when he back-doored running fastballs to Voit and Hicks for consecutive looking strikeouts in the third.

Toronto centre fielder Randal Grichuk tracked Gary Sánchez’s 114 mph line drive over his head and made an impressive catch with his back facing home plate to end the third inning.

Jack Hughes attended the game three days after being selected first overall by the New Jersey Devils in the NHL draft. The American hockey player even posed for a photo with comedian Adam Sandler .

Yankees manager Aaron Boone announced RHP Masahiro Tanaka will start the first of New York’s two games this weekend in London against the Boston Red Sox. The team has not decided on a starter for the second game.

Top Yankees pitching prospect Deivi Garcia had a second straight electric start with Double-A Trenton. After striking out 15 over six innings of scoreless, one-hit ball last week, he struck out nine over five innings during a combined no-hitter Monday.

The Yankees plan to use an opener, possibly RHP Chad Green, against Toronto LHP Clayton Richard (0-3, 7.46).