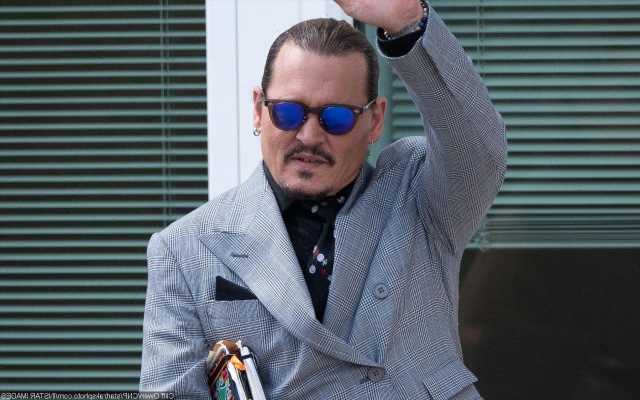 During a recess for the defamation trial in Virginia, an apparent overzealous fan of the ‘Alice in Wonderland’ star shouts that he fathers the baby that she’s holding.

AceShowbiz -A woman made a shocking claim during the much-publicized defamation trial between Johnny Depp and Amber Heard. As the trial entered its seventh week on Monday, May 23, one of the “Pirates of the Caribbean” star’s supporters shouted that he is the father of her baby.

The courtroom outburst took place during a recess for the trial. The TV cameras had been switched off and thus didn’t capture the moment on tape, but reporters and photographers were still in the courtroom and witnessed what happened. One of them was Law & Crime’s Angenette Levy who detailed the incident.

Showing the woman, who was carrying a backpack as she stood outside the courthouse during the broadcast, Angenette recalled, “All of a sudden, this woman… she stands up at the back of the courtroom with her baby, and she says ‘Johnny I love you, our souls are connected.’ ” Angenette said at first Johnny looked happy for the support, before things got crazier.

“He kind of turned and waved as he does sometimes, and everybody waved,” the journalist went on reporting. As a deputy approached her, the woman made the paternity claim. Angenette said, “She held up the baby and said: ‘This baby is yours.’ “

The woman was eventually removed from the court, and had her access wristband clipped off. “Everybody was like, ‘Uh, whoa, okay.’ The deputy’s like, ‘You’re out of here.’ So the deputy got her out of the courtoom. She was removed. They clipped off her wristband,” Angenette added. “It was pretty wild. It was a moment.”

After further investigation, Law & Crime managed to speak to the apparent overzealous fan, who claimed that she had discussed the plan with her husband, and that “they thought it was a joke, and thought it would be funny.” Concluding her report for the segment, Angenette added in jest, “Just FYI everybody, Johnny Depp does not have a third baby out there that was at the courthouse today.”