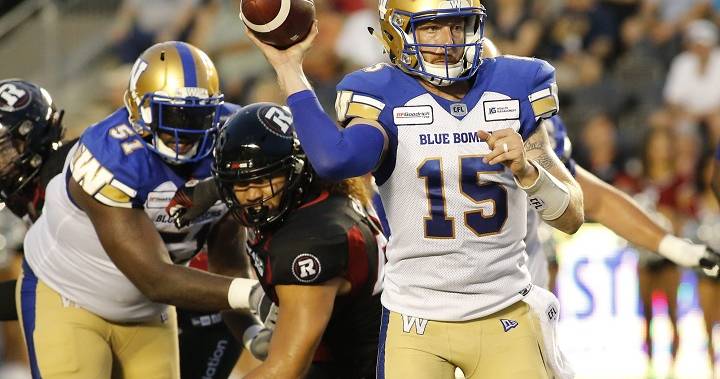 The Winnipeg Blue Bombers lost starting quarterback Matt Nichols, but remain undefeated after a 29-14 win over the Ottawa Redblacks on Friday night at TD Place.

Nichols was solid for the Bombers (3-0), going 16 for 20 for 262 yards and one touchdown before leaving the game in the third quarter.

He had rushed for 18 yards and was taken down hard by Kevin Brown and looked a little shaky as he made his way to the locker room.

Chris Streveler replaced him under centre, completing 6-of-8 passes for 42 yards, one touchdown, and one interception. He also rushed for two touchdowns.

The Redblacks (2-1) dropped their first game of the season and will have plenty to work on before next Saturday’s game against Montreal.

Ottawa’s Dominique Davis, making his first start against his former team, struggled going 21 for 36 for 234 yards and two interceptions.

The Bombers can open the season with four straight victories for the first time since 2003 with another win next Friday against the Toronto Argonauts at IG Field.