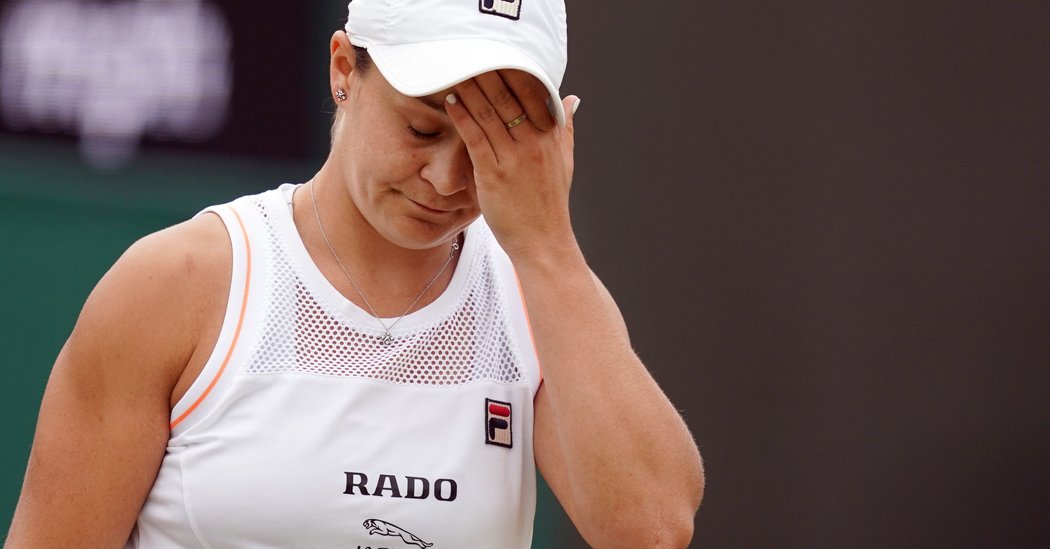 WIMBLEDON, England — Top-seeded Ashleigh Barty became the highest ranked player to fall at Wimbledon, losing, 3-6, 6-2, 6-3, to Alison Riske in the fourth round on Monday afternoon.

Barty, 23, entered the match with supreme confidence and was the oddsmakers’ favorite. In June, she won the French Open and became the first Australian woman atop the world rankings since Evonne Goolagong-Cawley in 1976. She had won her last 15 matches and played flawlessly during Wimbledon’s first week, losing no sets and only 12 games.

When she opened up her fourth-round match with four straight aces and took the first set with easy efficiency, it looked as if her winning streak would grow and she would soon be in the Wimbledon quarterfinals for the first time.

But Riske, a 29-year-old American ranked 55th, has been a strong grass-court player throughout her career and won a tournament on the surface last month. She played steadily, blasting her hard, flat groundstrokes deep, often playing to Barty’s dangerous backhand. She put pressure on Barty by coming to net 27 times and winning 74 percent of those points.

“The grass really brings out the best of me,” Riske told ESPN’s Tom Rinaldi after the match. “It really suits my game.”

When Riske broke serve early in the second set and held on to win it, 6-2, the capacity crowd of 4,000 on No. 2 Court erupted in full-throated applause.

Barty had won nine out of her 11 three-set matches on tour this year, but she succumbed to Riske’s relentless pressure and deeply struck groundstrokes.

Riske also won her previous three matches in three sets, including a 9-7 third set in her second-round win over Ivana Jorovic. She has now beaten the No. 1, No. 13 and No. 22 seeds at this tournament.

She will next play the seven-time Wimbledon champion Serena Williams, who defeated Carla Suárez Navarro, 6-2, 6-2.