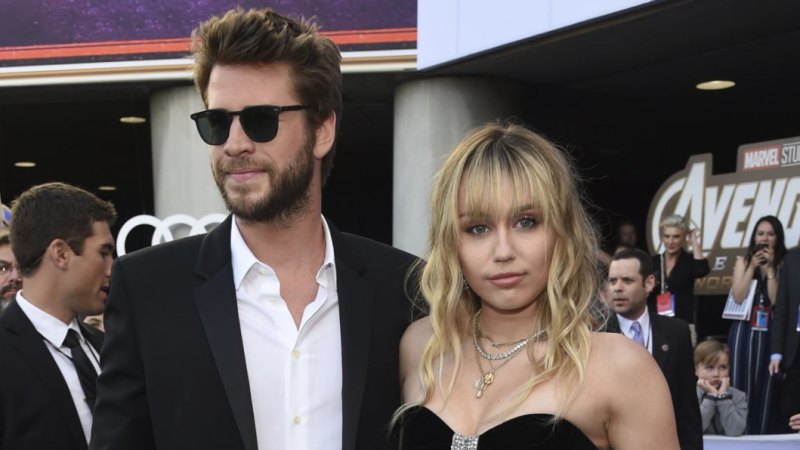 It rained this week when Miley Cyrus and Liam Hemsworth announced their surprise split.

Well, not quite, but there was a melancholic wind gust, a parting puff to the hope of lasting love between one of Hollywood's most likeable pop unions.

Over the past decade, the couple had a topsy-turvy relationship, a modern-day Taylor-Burton (if Liz Taylor had released an album named Bangerz, and if Richard Burton had played a paraplegic surfer on Neighbours). 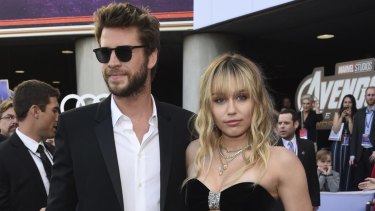 Liam Hemsworth, left, and Miley Cyrus at the premiere of Avengers: Endgame in Los Angeles in April.Credit:AP

The pair initially met in 2009 on the set of the Nicholas Sparks weepie The Last Song, got engaged in 2012, split in 2015 and got hitched in December 2018 after their house burned down during last year's California wildfires (people do odd things when they're stressed). That's a lot of engagement rings for a couple of 20-somethings.

Personally, I see little point in marriage in the first place. To prove to others that you're not alone? To throw away money on an expensive party with horrible cakes? To remind yourself not to spend your entire weekly wage on pale ale?

Celebrity marriages, though, are even more confusing. What's the point?

Take Liam and Miley, for example. Two young, attractive and heavily lusted-after personalities, ensconced in a working and personal milieu where they're perennially surrounded by similar types.

They could be enjoying the pretty years of their 20-something celebrity, flirting with, say, Zendaya and Timothee Chalamet, and similar Hollywood starlets. Instead, they're navigating a messy separation and potential divorce like a couple of middle-aged depressives.

Hollywood is packed with examples of celebrity marriages abruptly gone awry, many much shorter-lived than Miley and Liam's eight-month union. And it's not just a "restless millennial" thing: Ethel Merman and Ernest Borgnine lasted 32 days in 1964, blazing a trail for the likes of serial brief-wedders such as Drew Barrymore, Pamela Anderson and Nicholas Cage. 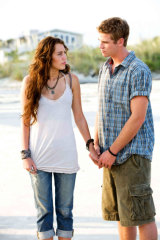 Cyrus and Hemsworth in 2010’s The Last Song.Credit:Walt Disney Pictures

Who do celebrities think they're fooling with their "marriages" anyway? What may be a weird tilt at shaping their bizarre schedules into something resembling "normal life" – the stable "work, dinner, couch" routine many of us take for granted – usually ends up anything but.

Between lengthy overseas gigs and publicity tours, married celebrities are hardly ever in the same place. If you're not having a daily argument over who packs away the cutlery or replaces the toilet roll, is it really a marriage? (Boo! [wiggles fingers] I'm the ghost of Rodney Dangerfield.)

"Please respect their process and privacy," Cyrus' reps wrote in a statement to media, at the same time as pics of Miley kissing some girlfriend in Italy were plastered across social media. No doubt the upcoming album cycle will be all about "love lost" or "freedom reclaimed" or some such convenient angle.

Perhaps that's too cynical. Who am I to mock celebrities' attempts to find a lifelong love-match, and to watch that love founder in front of the entire world? As Hemsworth emotionally put it to a pesky tabloid reporter this week: "You don't understand what it's like."

No, we don't. And neither does Leonardo DiCaprio. I think there's a lesson in there somewhere.