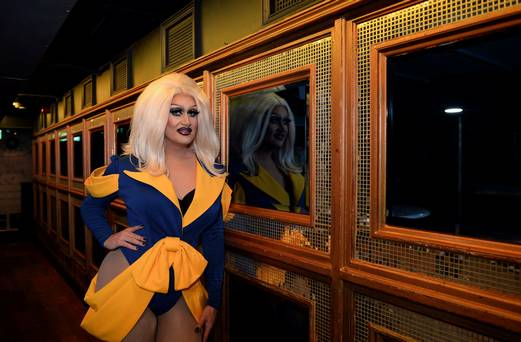 Drag culture is having a moment.

It’s a practice with roots as far back as the early 20th century, but now, it’s considered an art form and like all artists, it’s practiced by many, but perfected by few.

In recent years, drag has exploded into the mainstream thanks in no small part to the success of RuPaul’s Drag Race, the American tv show streamed around the world and hosted by the eponymous legendary drag queen.

For more than 12 seasons, viewers have flocked in their millions to watch drag queens compete in a pageant-like contest in which they are given challenges and eliminated in each episode with one winner taking home a €100,000 prize.

As any reality show contestant can tell you, it’s about the journey, not the prize and those with enough business savvy can secure a lucrative career for themselves by touring around the world.

Ireland has been ahead of the curve for more than a decade – just ask Philip Keogh, better known by his stage name Victoria Secret. For almost 16 years, he has been one of the most revered drag queens in Ireland; blazing a trial during a time when the culture was still a cult secret. Philip was also one wise enough to spot the potential in this performance model and he now runs Dragged Up which brings drag queens from around the world to Dublin.  Dragged Up was born when seven years ago, after he spotted a gap in the Irish market for big-profile drag performers.

But drag isn’t a new phenomenon to Philip, it has been part of his life since he was 19 years old.

”It was in college when I first tried drag: I bought a pair of shoes from a place called Barrett’s because they were the only place that would do a shoe over size eight,” he tells Independent.ie Style.

“It was a slingback shoe and it wasn’t the best for performing because they would slip off so I had to tie them on with ribbon, which was ridiculous because they still slipped off.”

“I performed Toxic by Britney Spears and I probably caused her breakdown because that’s how bad I was,” he jokes. “I was terrible, I was so bad. It took me so long to figure out how to move on stage, how to be on stage, how to look on stage.”

Growing up in Dublin’s Cabinteely, he says he always knew he was different, but didn’t quite understand what that meant.

“When I would sit in class in primary school, I knew there was something not the same about me and the boy beside me,” he explains.

“I had pigeon-holed myself into being the quiet person in school and I was nervous reading aloud in class, I didn’t want to be that person that was picked to stand up in the class and read.

“It’s very Irish – nobody wants to be different from their next door neighbour, so I knew I had to conceal it, but yet I didn’t know what it was,” he added.

Homophobia was still rampant in the mid-noughties: words like ‘f****t’ were aired as acceptable language on television and same sex couples rarely appeared in mainstream media. In one of Philip’s experiences, it came in the form of his former co-worker outing him without his consent. “I worked in a supermarket at the time and this guy who worked with me kept calling me out for being gay, but I was not ready to come out. It was such a different time, but I also knew that his girlfriend fancied me,” he recalls.

“We were all out one night and she cracked on and I kissed her and I didn’t have feelings for her, but I was like, f*ck him for calling me gay.

His road to public self-acceptance came with the support of his mother Patricia McDermott and growing up knowing her brother, his uncle, was gay helped him come out when he was ready.

“I think when my mum found my bag of drag, I was still living at home when I started to do drag, she was like ‘ph what’s this’ and I said that I was performing in drag but she was very confused by that,” he says.

“She thought I had maybe gender issues but I didn’t, I never questioned my gender.”

She began to understand the magnitude of his work when he was able to secure a mortgage in his early 20s.

“I was working five nights a week and I got a mortgage that year, I was 23 and there were very few people that at 23 were able to do that.

“It was because I was working full time in the theatre and essentially full time as a drag queen,” he says.

Victoria Secret is now one of the biggest names in Ireland’s drag scene, joining the likes of Panti Bliss, Shirley Temple Bar and Veda Lady in the upper echelons of the culture.

Even though the performance of drag is getting recognition like never before, Keogh says that Irish people in particular have always been very receptive; dating back to 2001 when Shirley Temple Bar (aka Declan Buckley) took over presenting the National Lottery on RTE.

“I often think people put a lot of weight on how much RuPaul’s Drag Race has done in terms of drag, and in Ireland we don’t give people enough credit for how far we kind of were already,” he said.

“Panti, Veda and Shirley had worked all over the world and maybe they were the trio of ‘originators’ of drag over here.”