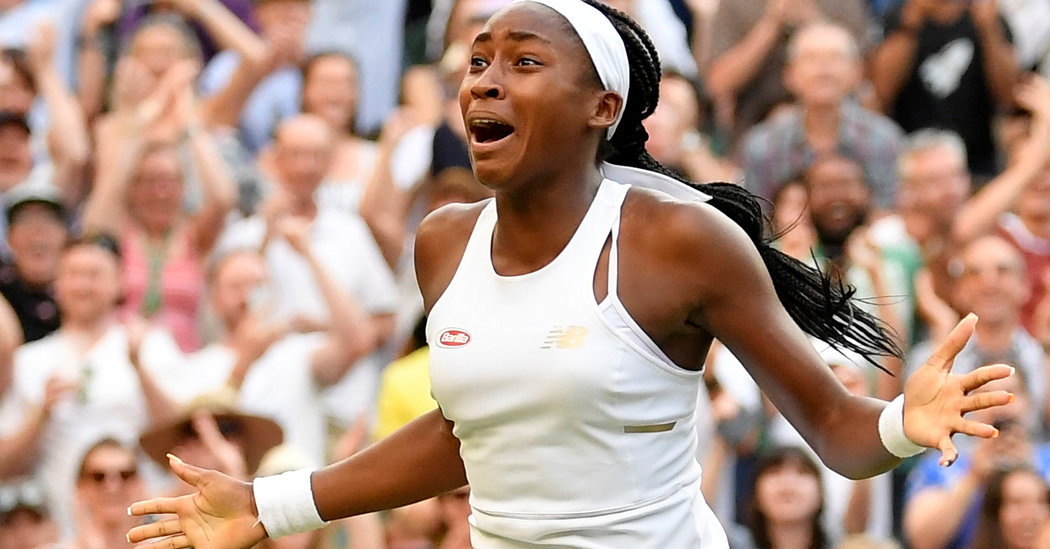 At age 15, Cori Gauff may just be America’s next tennis star, and the world has taken notice.

She caught everyone’s attention when she upset Venus Williams in the opening round at Wimbledon on Monday. With the win, Gauff’s profile began to rise. Then she won again, defeating Magdalena Rybarikova. And again, coming from behind to defeat Polona Hercog in a thrilling match on Friday, making her the youngest player to advance to the round of 16 at a Grand Slam event since Jennifer Capriati did so at Wimbledon in 1991.

Hailed as the latest American tennis prodigy, Gauff has been well known in tennis circles for some time. But now she is preparing for the biggest match of her young career, against seventh-seeded Simona Halep on Monday.

Gauff, who is better known by her nickname, Coco, has captured the hearts of tennis fans and drawn comparisons to Venus and Serena Williams. A string of #blackgirlmagic tweets followed Gauff’s victory on Friday, with many Twitter users alluding to the impact the Williams sisters have had in drawing black athletes to the sport.

By the time Gauff was born, in 2004, the Williams sisters were household names. Venus and Serena Williams disrupted the image of tennis, which was that of a sport predominately for the white and rich, many of whom ascended to the pros from country clubs.

Gauff and others her age grew up with the Williams sisters dominating tournaments. They do not know a world without them as the predominant tennis stars in the United States.

The Williams sisters don’t have to wait until they retire to see the impact they have had on the sport: She’s there, right in front of them.

Gauff, too, is making waves. She has earned praise from Michelle Obama, the former first lady, not to mention a young girl who screamed and jumped around after watching Gauff win on Friday.

Some of the biggest athletes in the United States have tuned in for the spectacle. Joel Embiid, an All-Star with the N.B.A.'s Philadelphia 76ers, was one of those who commented on the match.

One of Gauff’s favorite musicians, Jaden Smith, who released a new album Friday, showed his support as well. Gauff, when asked if she was more excited about winning or about Smith’s album, laughed and said, “Both.”

Throughout the match, her parents, especially her mother, Candi, were caught on camera dancing, cheering and hugging. Her father, Corey, is also her primary coach.

Many people praised her parents for apparently raising a poised, mature daughter who has held her own in the sudden spotlight.

Many people who could not make it inside the stadium watched from the hill nearby. It was filled to capacity with eager fans trying to catch a glimpse of the action. The audience erupted in cheers when Gauff sealed the win against Hercog.

Gauff also received shout-outs from her sponsors, New Balance and Barilla, after her big wins. New Balance has posted multiple times, even initiating the hashtag #FearlesslyIndependent in one of its posts, while Barilla posted a photo with the words “Go Coco” sketched over it.

Gauff had the highest-rated matches in the United States on all three days that she has played, according to ESPN. The BBC reported that all three of her matches have been in the top eight in viewership in the United Kingdom, with the match on Friday topping off at 5.2 million viewers.

Monday’s match, with a spot in the quarterfinals on the line, is likely to be one of the tournament’s most-watched.