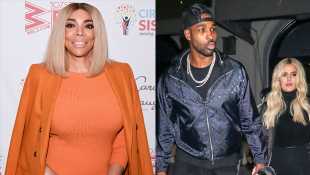 Wendy Williams has moved on from Khloe Kardashian and Tristan Thompson’s relationship, and she wants him to do the same! After he tried to flirt with his ex in a since-deleted Instagram comment, Wendy urged him to move on!

Wendy Williams says she knows a thing or two exes coming back for more. The newly single talk show host, 55, spoke from experience when she weighed in on Tristan Thompson‘s recent attempt to flirt with his ex, Khloe Kardashian on Instagram — despite him cheating on her, which ultimately led to the end of their relationship. “Tristan is still bothering Khloe,” Wendy said on her September 24 show, in reference to his now deleted flirty comment on her latest Instagram photo.

“My thought is that Tristan and Khloe will always have to be involved with each other in some sort of way because they have that baby,” she explained of the couple’s 1-year-old daughter, True Thompson. Later on in her rant, Wendy said there’s only one thing left for Tristan to do. — “Leave her alone!” she demanded of the NBA player, 28, adding that he should move on. “She’s obviously done with you,” Wendy said about Khloe.

Tristan had fans riled up on Saturday, September 21, when he left a simple heart-eyes emoji, along with the compliment, “perfection,” under Khloe’s Instagram photo. In the sultry snap, his ex tried to recreate a look by the late Anna Nicole Smith, dressed in a plunging denim bustier top. The athlete deleted the comment not long after posting it, which led to questions about a secret reconciliation. The exes have not addressed the status of their relationship. Nonetheless, it appears as though they’re just trying to navigate co-parenting after his cheating scandal, as seen on the latest episode of Keeping Up With The Kardashians.

Amidst her analysis of Khloe, 35, and Tristan’s relationship, Wendy veered off topic and seemed to call out a mystery man who recently popped back up in her life.

“But, there’s certain guys who — I know this first hand — will not leave you alone,” she said. “Oh they tell you you’re beautiful and you look great on today’s show. They say silly things like, ‘A ship always returns to the port.’ Oh no, this ship has already sailed, honey. Like, who are you talking too?”, Wendy continued, in reference to the unidentified suitor who apparently tried to win her back.

Wendy explained, “I just think that there’s some people when the relationship is over, whether it’s a man or a woman, there’s always someone who’s trying to get into someone’s head to see exactly who they are. Are they going to take the bait? Are they going to bite? Will you ever be back in their bed, or kiss them again? Will you ever be on a romantic dinner with them or will it always be family business?”

It’s unclear who the host was talking about, however, it could’ve been her estranged husband, Kevin Hunter Sr., who she’s still in the process of divorcing. Wendy filed in April after Kevin fathered a child with his alleged mistress of years.