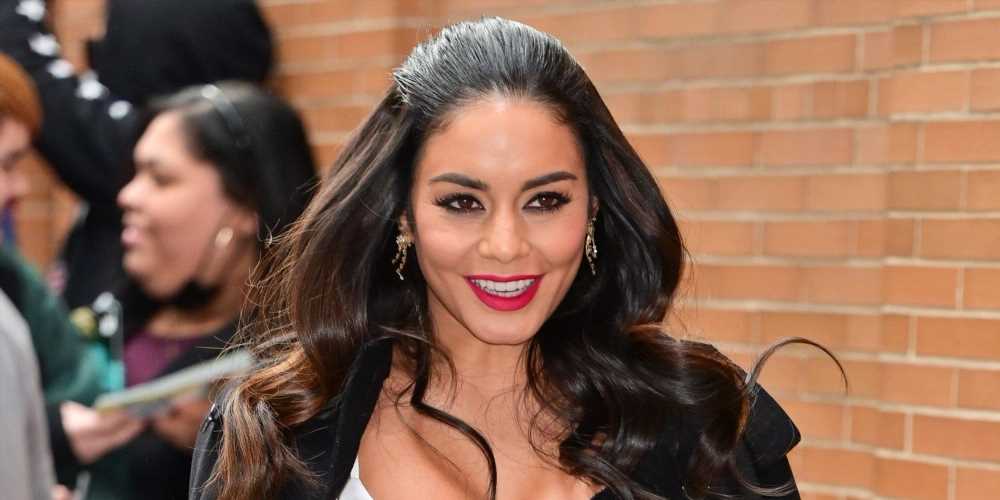 Baby V is back in a big way. Vanessa Hudgens is in New York City promoting her latest film, Netflix's Tick, Tick … Boom!, which means a parade of outfits for her various chats with late-night hosts and everything else that comes with the release of a movie about the creator of the beloved musical Rent. And while it's not unusual for a star to step out in two or three outfits, it is unusual for them to re-wear something, but when you've got a Valentino cape, there's no point in wearing it only once.

Hudgens wore the flowing black cape with a black-and-white look from the Carolina Herrera Spring 2022 collection. The two-piece matching set featured a bustier top and midi skirt, both printed with a brushstroke-inspired text that read "Carolina Herrera" in scrambled letters. She wore pointed black pumps with the ensemble and her hair was half back in a look that most people can remember as the standout style best remembered as Jennifer Lopez at the 2002 Oscars (or, a more sophisticated version of the beloved Duff puff). For her second look, Hudgens wore the same inky, epaulet-embellished cape with a bright pink quilted dress with gold teddy bear-shaped buttons and a hot pink belt. She added sheer black stockings and wore sky-high chunky platforms with a flared heel to finish the look. She kept her hair the same for both outfits and wore similar bright pinky-red lipstick for each one, too. Hudgens, who is known for her roles in various musical adaptations, told the co-hosts on The View (which is where she wore the black-and-white matching set, minus the cape) that Tick, Tick … Boom! was a "love letter to musical theater."

In addition to her star turn in the High School Musical franchise, Hudgens has had roles in Grease Live! and Rent Live! on television and has played both Maureen and Mimi in productions of Rent on Broadway.