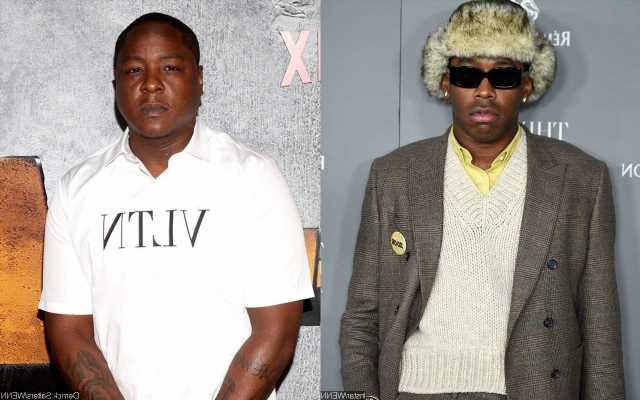 As the ‘Earfquake’ spitter publicly admits he’s got a crush on The Lox’s former member following the trio’s ‘Verzuz’ battle with Dipset, many accuse the Odd Future co-founder of being disrespectful to the straight artist.

AceShowbiz –Tyler, the Creator has found a new interest in Jadakiss following the latter’s appearance on “Verzuz”. Tuning into the popular Instagram Live series as The LOX and Dispet went toe-to-toe on Tuesday, August 3, the Odd Future Wolf Gang Kill Them All co-founder and de facto leader couldn’t keep his eyes off of the Yonkers native.

Weighing in on the 46-year-old’s performance, the 30-year-old star publicly declared he’s got a crush on The LOX’s former member in the comments during the livestream. “JADAKISS SKIN IS SO NICE,” he gushed. Further sharing his fondness for Jadakiss, Tyler, the Creator wrote, “pause I think I gotta crush on jadakiss that n***a confidence and voice control is crazy and he aged well wheesh.”

While Tyler, the Creator meant no harm with his comments on Jadakiss, not everybody appreciated how he was lusting after the “Why” hitmaker, who is a straight man. Accusing him of being “disrespectful,” one wrote, “I feel like some gay men have no respect for straight men sexuality !!!! How you want straight men to respect your sexuality but you don’t respect theirs? Definitely disrespectful.”

Another simply remarked, “Wow that’s disrespectful.” A third echoed the sentiment, “This mad disrespectful but if he says something he’s cancelled that’s sexual harassment and it’s not funny.”

“Tyler need to relax everybody dont play like that,” someone else added. Similarly, a fifth commenter told Tyler, the Creator to save his energy for another gay man, “See now Jada kiss would be wrong if he spoke up on that comment Tyler needs to chill and go hit on a gay man…”

“Stuff like that is gone spark an argument. Stop playing with that straight man!! Then when he clap back he wrong,” someone argued. Agreeing, another noted, “This why Rappers talk s**t about gay people !!!!!!!!!!!!!!!!!!!!!!!!!!!! cause people say s**t that could offend somebody then be mad when they get cursed Tf out by a straight man and call them homophobic like huh.”