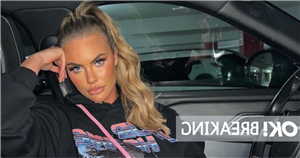 The Only Way Is Essex star Kelsey Stratford has shared her heartbreak as her younger sister stopped breathing.

She wrote: "Praying for my little Kennedy so much today [crying face] last night was the most horrible thing I have ever had to see in such a long time. She stopped breathing & was struggling for a long time yesterday."

"So so unfair and gutted for her," the reality TV star went on.

In a more recent update, Kelsey said she'd just arrived home from hospital as she confirmed that Kennedy will be remaining there.

"Kennedy is still in hospital but she is in the best place for now," she wrote alongside a sad face and heart emoji.

Kelsey has opened up about her sister's condition before and broke down in tears on a 2020 episode of TOWIE.

"[Kennedy's] got a disease called SMA, it paralyses her from the neck down but her brain is completely normal," she explained at the time.

She went on to recall how difficult lockdown had been for them as they tried to protect Kennedy from contracting the virus.

"In lockdown it was really hard for us, for three months I couldn't leave the front door – I still haven't even kissed her, it's been six months. It's scary.

"I did have a little brother who had the same disease as well but he passed away at four months."

Despite their efforts to protect Kennedy from contracting Covid, the youngster went on to fall ill with the virus in November 2020 and ended up in hospital as a result.

Explaining how "life threatening" it was for her, Kelsey informed fans: "Kennedy was high risk to covid & we tried our best to shield her from this terrible virus but unfortunately because of her low immune system she caught it.

“She is in intensive care but really fighting like she always does, so i just need everyone to keep her in your prayers and hopefully she gets through this my strong little girl she doesn’t deserve any of this”.

Kennedy, who is thought to be around ten years old, defied the odds after doctor's predicted she'd only live to 18 months old.