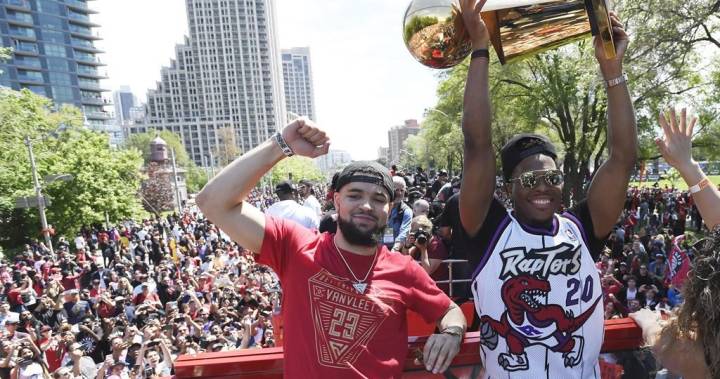 TORONTO – Fred VanVleet never has put much stock in the opinions of media pundits. Not when his Raptors were struggling against the Philadelphia 76ers in the second round of the NBA playoffs, not when Toronto won the title, and not when superstar Kawhi Leonard left the team for the Los Angeles Clippers.

The point guard definitely isn’t going to start listening to basketball commentators now as they dismiss the Raptors’ chances of repeating as NBA champions.

“Typical. Typical media stuff. We’ve dealt with it before,” said VanVleet on Wednesday. “I don’t think any of us felt like we were darlings of the world just because we won a championship.

“Everybody’s seen both sides of it. You win a championship, everybody praises you and pats you on the back and then Kawhi leaves and it’s right back to ground zero where we were before so we’ll just stay even-keeled, stay hungry, and get back to work.”

VanVleet attended the Raptors Basketball Academy on Wednesday, a week-long camp the NBA franchise hosts for hundreds of children every summer to help develop basketball skills. VanVleet played against the kids for an hour with former Raptors centre Matt Bonner before speaking to reporters for the first time since Toronto beat the Golden State Warriors in Game 6 of the NBA Finals on June 13 for the team’s first-ever title.

Still sporting a scar under his eye from several elbows to the face during the hard-fought series against the Warriors, VanVleet said the Raptors were ready to start the new season. His teeth – which had been severely damaged after a foul from Golden State guard Shaun Livingston – have since been repaired.

“We’re hungry. We’re hungry again,” VanVleet said on the basketball court at Humber College’s north campus. “Obviously, it was a great run, we had a good time. We won a ring. But your career doesn’t stop because you win a championship. We’re all hungry and thirsty to get back to the finals.”

Although Leonard broke the hearts of many fans when it was announced on July 10 that he was leaving for his hometown Clippers after only one season in Toronto, VanVleet said there were no hard feelings among his Raptors teammates.

“You respect the guy and what he wants to do,” said VanVleet. “Would we have liked for him to come back? Of course, he’s one of the best players in the game but we don’t think about it like that.

“Fans and people from the outside put a lot of stock into the players as these superhumans – he’s an unbelievable basketball player, don’t get me wrong – for us, in the locker room, we’re all equals. We respect him as a brother, as a friend, he moves on and we’ve got to do the same.”

Bonner, who played for the Raptors from 2004-2006 and then won NBA titles with the San Antonio Spurs in 2007 and 2014, sees himself as proof that a championship can inspire kids to start playing a sport.

“I grew up about an hour north of Boston and I remember in 1986 when they won the championship, that’s one of my earliest basketball memories,” said Bonner. “My dad went to the championship parade, it was on TV, and he brought me a hat back.

“I remember being like ‘I want to make it to the NBA, I want to be in a championship parade.’ It really got me interested in the game. You’re going to see a similar effect here in Toronto.”